A puppet show that reaches far beyond its Punch and Judy players into a farcical and philosophical exploration of repetition, life and death.

Famous Puppet Death Scenes is a poetic and epic exploration of the comic potential of bathos. The setting of Summerhall’s cavernous Canada Hub, the stage dressed as an art deco puppet theatre, provides an absurd contrast to a parade of small people, animals and sometimes even objects that meet their miserable demises – again, and again, and again. Death, it seems, is the ultimate punchline – as memorably suggested by a giant fist that repeatedly returns to crush egg-shaped men. 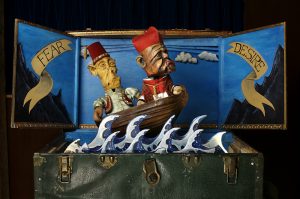 In fact, Famous Puppet Death Scenes owes as much to the rhythms of comedy and clown as it does to the art of puppetry. For these little lives, life is a joke – a joke we see repeated, with always the same end. The skill of the Old Trout Puppet Workshop is in maintaining this comic tension. Life is created before our eyes, lives its short existence, and then is snuffed out – and the return of object to its lifeless state always bringing with it a bathetic release of laughter. The effect is slowly hypnotic, as well as hilarious, as the audience becomes hysterical with disbelief at what is apparently an hour’s worth of entertainment. When puppet narrator Nathanial Tweak asks about the early creators of ‘Puppet Death Scenes’ “what instincts drove them to do such things?” he eloquently voices the thoughts of an audience questioning what the hell it is watching.

When the show is at its strongest, the simplicity of the writing of its comic scenes – and their ability to somehow surprise us whilst offering the same surprise – really shines. Particular standouts include a Swedish family of puppets who each succumb to suicide in grief over the deaths of the others and the recurring battle between Nordo Frot and the giant malevolent fist that plagues him. Inevitably, however, the show’s momentum begins to slow during its one hour ten minutes runtime – a marathon for the maintenance of one idea. If some sketches do fail to land and threaten the audience becoming tired of seeing this single idea, it is perhaps because Old Trout’s level of invention is so dazzling elsewhere. Judged against its own material, Famous Puppet Death Scenes’ weakest scenes are weak. Judged against the rest of the Fringe, they hold their own.

But it is when Old Trout puppeteer the audience’s imaginations that the show is at its best. Contained in this violent farce are beautiful scenes that are heartbreaking because they take place almost entirely in our heads. One sequence, where a flipbook brings us closer and closer to the revelation of a horror, is truly haunting. In another, a puppeteer stands next to a deathbed, merely providing the sound of a breath which suddenly stops. In the repetition of this one joke, it feels, Old Trout are distilling it into its finest and purest form – the creation of an image that will long outlive its papier-mache players.

Famous Puppet Death Scenes was on at the Canada Hub, Summerhall. More information on the company is available here.