Review of: Nine Night at the National Theatre

Price:
From £15
Reviewed by: Alex Wood

Natasha Gordon makes her playwrighting debut at the National

The process of grieving is a fascinating convergence of different strands – nostalgia about the past collide with aspirations for the future as traditions re-emerge and old faces are rediscovered. Closure is for some a distant abstraction, for others an instant possibility. The past, present and future all hang in limbo, the perfect context for a stage show and one Natasha Gordon teases into her debut play, Nine Night, at the Dorfman Theatre.

Gloria has died, in the space of a few weeks going from laughing at the kitchen table to being laid to rest. So begins the traditional Caribean Nine Night wake, with relatives, friends and family flooding into her home, bringing gifts, stories, pressures, food and music. She leaves behind her three children, Lorraine (Franc Ashman), Robert (Oliver Alvin-Wilson) and Trudy (Michelle Greenidge), the last of whom has flown over from Jamaica to be there for the funeral. Each bound by their collective grief, but at the same time at loggerheads over the next steps to take with both their own, and Gloria’s, world.

Gordon’s script turns raw, familial sadness into a vibrant, engaging text. The melancholy is palpable, particularly for Ashman’s Lorraine, and it spills out into the audience, taking relatable circumstances and letting her characters go on very real, empathetic journeys. For a stage debut, it’s incredible to see Gordon’s ear for flowing, naturalistic dialogue, perfectly integrating the horde of gags courtesy of Cecilia Noble’s Aunt Maggie. 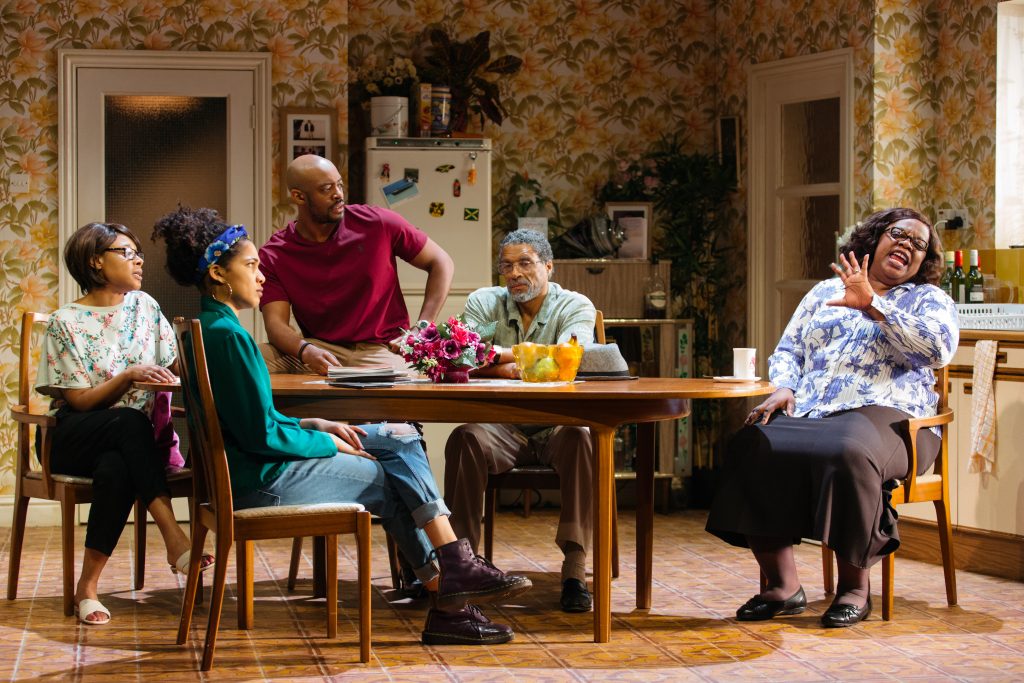 The cast of Nine Night, photo by Helen Murray

JMK award-winning director Roy Alexander Weise knows when to lay on the stylisation and when to dial it back, allowing the majority of scenes to naturally play out with a consistently enjoyable pace, interrupted by quick bursts of supernaturalism. It’s a piece that’s constantly aware of the fact that, as much as it’s a play about the living, it’s one surrounded by the dead.

The Dorfman, continuing its recent love affair with domestic spaces (given the recent productions of John or Beginning, both of whom also went for the hyper-realised, unchanging kitchen/living room settings), is transformed into a recognisable south London ground floor by designer Rajha Shakiry. Paule Constable’s lighting, in the same vein as Weise’s direction, is never too showy, but as Gordon’s script weaves in its supernatural visions the scene slowly shifts into something less tangible, more surreal. It’s a gradual shift into fantasy.

Though the last fifteen minutes feel slightly too rushed (one would have wanted Gordon to insert an interval and extend out the emotional conclusion of some of the characters), it all holds together as a meditation on loss, on gain and family. Coping with death can, for some, be shackling, while for others it means a release. All of these different ideas curl around one another and it is Ashman who holds court as her own tragedy comes to the fore. Nine Night is tearjerking, humane and spritely – what more could you want from any piece of theatre.