Review of: Boudica at Shakespeare's Globe

A visually powerful show to end Emma Rice's Summer of Love, though hampered by the writing.

If you’re going to see Boudica and, all things (to be) said, you should see Boudica, muster up the courage and stand in the yard. It’s an infinitely better experience – the actors sing to you, they splash blood over you, they fly over your head as they conquer your city. You become the screaming horde. As has become a recurring theme for Emma Rice productions at the space, from the seats, looming over the stage, you are instead a voyeur rather than a participant. One of Tristan Bernays lines even chastises us – ‘don’t just sit and f*cking stare!’ – but there we are, sat, staring. If the groundlings are the life and soul of the party, bobbing along to the sporadic musical numbers, then we are the uninvited, watching from above the low-lying haze.

It created an odd sense of distance for a production that requires (and very often delivers) a continued sense of dynamism and excitement. Bernays has taken one of the bloodiest periods of early British history and run with it, complete with sparring battles and visually stunning conflict. And, as he constantly reminds us, some exhilarating roles for women. Director Eleanor Rhode hasn’t left anything to the imagination, flooding her stage with war, battle and movement.  Movement directors Rachel Bown-Williams and Ruth Cooper-Brown have created one of the most heart-pounding sequences in the Globe’s history with the final battle between Abraham Popoola’s Badvoc and a variety of Roman legionnaires. It was edge of your seat (if you’re still sat) stuff.

This is Brexit-Boudica, through and through. The Britons repulsing the foreign powers from Rome, who exert too much influence over our independent nation. As much as there are exciting roles for women involved, they are all in service of Bernays’ slightly-hamfisted attempt to quantify our own modern woes. He stuffs the text with platitudes (just like many modern politicians no less) – taking our isle back for those ‘born and bred’, fighting against a ‘tide of filth’. The parallels are painstakingly opaque. This extended to general writing traits, Bernays leaning far too frequently on well-worn phrases (‘the best form of defence is attack’, ‘bury the hatchet, or use it’, ‘enemy of my enemy is my friend’, ‘march into the mouth of hell’) – it all felt like a greatest hits package from a number of war films stitched together. 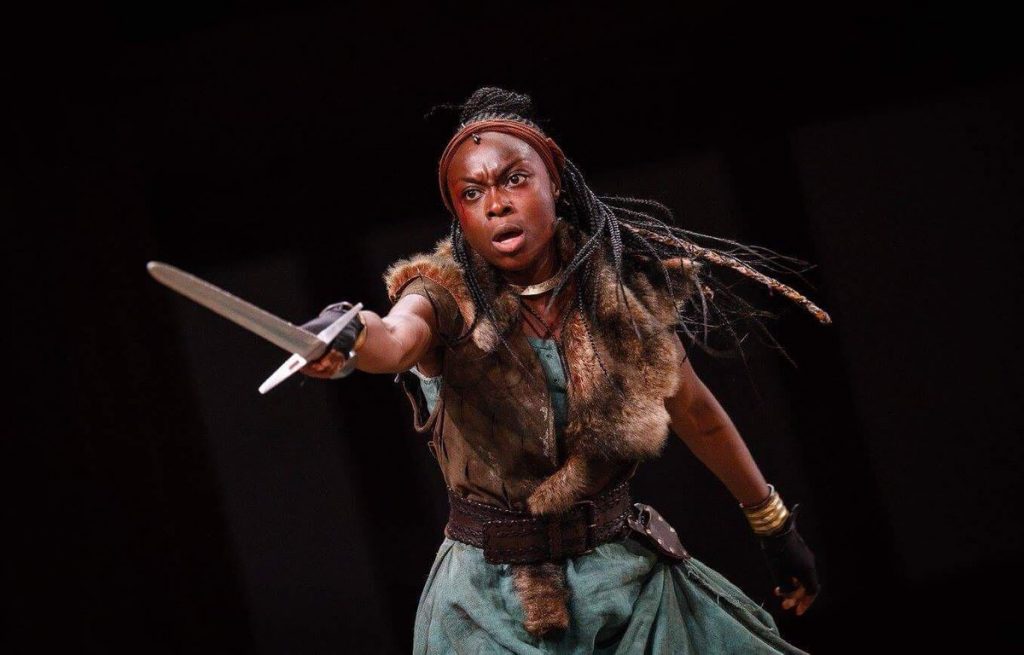 The thesis is explicit – both sides, no matter Roman (read: European) or British, are at fault here, both have intrinsically immoral facets and shortcomings. And through the conflict, as Boudica’s daughter Alonna (the most accomplished turn of the night from Joan Iyiola) states, ‘this isle will crack’. Politically, that definitely feels apt.

The issue with the script is that Bernays reaches his conclusion in Act Two Scene One – we’re ‘different skin but savage all the same’, no matter where we herald from. We are all morally ignoble and to perpetuate these ideas is harmful to all. The rest of the play is simply spectacle, lip-service to these ideas. Two thirds of the play spin out what is mentioned in a single monologue. Moving this monologue towards the end may have made for at least a more satisfying arc.

The show, essentially, becomes an incredibly successful production done for a relatively mediocre script. Rhode knows how to combine stillness and anarchy, while designer Tom Piper slowly deconstructs a wooden façade and creates a wonderful floating forest. Costume design, relying on desaturated red and blue fabrics to demarcate the two sides, is equally apt (though the Rome-representing procurator has taken some severe fashion tips from Joffrey Baratheon, in what seems deeply uninspired).

The acting is hampered by the script – Gina McKee’s central character never seems to get the climactic finish she deserves, often being overshadowed by the more bolshy figures she shares the stage with. Her voice leaps forth when she’s left alone, rasping slightly as if she has a lump in her throat, a slight melancholy underpinning her lines. For a martial warrior she can sometimes feel haggard, invisible.

A visually powerful show to end Emma Rice’s Summer of Love (this was the last show to open, though Much Ado will be the last to close), and one that is not short of successes, but the overall vision rarely allows these successes to shine.