Bizarre combination of circus acts married with an attempt to shed light on the horrific plight facing refugees around the world.

A woman descends through a hole in a cerulean canvas. She struggles, she drowns. Did you know that during 2015/16 over 10,000 people drowned trying to get from North Africa to Europe? ‘Limits’, the new show by Swedish circus act Cirkus Cirkör, is full of these sorts of facts, arriving at the Southbank Centre as part of its Nordic Matters season running throughout 2017. 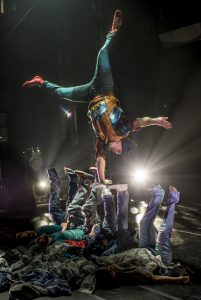 Migration, borders, and home are the through-lines of the show. Three men, two women, and one be-turbaned musician take us through various circus staples like a cut-price Cirque du Soleil. As well as the performers themselves there’s projection, percussion, graphics, and voice-overs (telling the story of two refugees from Iraq and Afghanistan).

‘There’s a big difference between a circus performer who takes risks of their own free will, and an individual fleeing for their life.’, Tilde Björfors, director of Limits and founder of Cirkus Cirkör, informs us in the programme. Indeed. I venture the difference is so big that to base an entire show around it is to do both a disservice. For example I’m not sure what solving a Rubik’s cube blindfolded has to do with the plight of refugees but the audience seemed mightily impressed when it was done. Projecting your solution onto a map of Europe charting migrant flows doesn’t cut it. Later, an iconographic projection of the number of refugees fleeing their homes at the present time was counting, metronome-like, during an entire act and only made me wonder distractedly, ‘how did they calculate that?’.

‘The world is in balance’, trapeze artist Saara Ahola tells us, ‘people need to move around to maintain that balance; if we close our borders and stop letting in refugees … it will become unbalanced’. I’m not sure somebody has explained Newton’s Universal Law of Gravitation but you’ll excuse the irony of highlighting the principle to someone who flies through the air for a living.

Surprisingly the simplest feats were the most striking. Juggler Peter Åberg managed to elicit a comical melody with just three percussive PVC pipes. There were other musical touches, a violin played taqsim-style along with the plaintive wailing of the female performers, put in mind the regional sounds of the coerced diaspora. When they put their politics aside things coalesced, unfortunately they didn’t do this often enough.

There is a particular masochism about London theatre audiences. We have to sit through a lecture on the migrant crisis before we feel good watching some backflips. The stunt work is the spoonful of sugar that helps the open-border medicine go down. ‘Refugees welcome’? Didn’t anybody tell these people that the UK voted for Brexit. Intellectual contortions aside, it’s a reminder that unlike the circus migrants are subject to forces much larger than themselves. Art is a way out of that impotence but it takes more than the gratuitous grafting of someone’s horrific story onto a trampoline act to appreciate that.