A masterpiece of pure spectacle: physical theatre at its most sensitive

It played to sell-out audiences at the 2011 Fringe and Translunar Paradise has lost none of its shine this year. Theatre Ad Infinitum present an exquisite tale of love, loss, and loneliness, told entirely through mime. 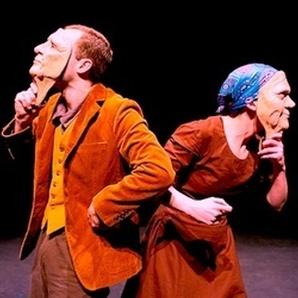 The story traces the life of an aged couple: the man’s grief when his wife passes away and the woman’s efforts from beyond the grave to aid him in coming to terms with that fact. Woven between the strands of the first plot is another: the man’s part-remembered, part-imagined fantasies of a parallel and more youthful couple.

Deborah Pugh and George Mann switch seamlessly between playing both pairs, nailing physicality from the outset. As each gracefully raises a wrinkled prosthetic face to theirs, the bodies beneath morph fluidly into the manner and stature of the next character. Facial expressions obscured behind masks are revealed instead by an incredibly sensitive use of body language. It’s clear that every movement in the show has been choreographed minutely and rehearsed to perfection. Everything is synchronised, with Mann and Pugh answering to the slightest twitch in each other: a clenched fist and turned head, drumming fingers or a lean forwards.

Accompanying the pair is a third Ad Infinitum member, Kim Heron, who sings, plays accordion, and controls the pathos of the show. Heron’s voice is at once understated and capable of carrying the story: her music takes the place of words.

The story is not particularly ground-breaking, nor is it likely stay with you a great while after curtain fall. But there’s no question that Translunar Paradise is a beautiful watch: as pure spectacle, it is a masterpiece.