Beautiful circus performances but with very little to connect them

The award-winning circus company Cirk La Putyka returns for its third year at the Fringe, having boasted sell-out runs in both 2011 and 2015 and looking to do the same with their new circus piece Batacchio. Part of ZOO’s Czech showcase 2017, Cirk La Putyka website explains that ‘the theme, the story and the message are as important as the professional approach to both (…) individual theatre genres and circus disciplines’. However, while one could tell that there was an attempt at an overarching thematic purpose, it sadly did not come across quite strong enough to connect all the acts in the theatrical way Cirk La Putyka had hoped. 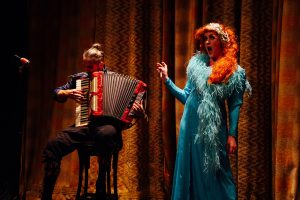 The individual pieces were mostly very impressive, however, annoyingly every section felt like it ended just before the climactic moment came. Sections involving a wooden hoop, bicycles and certain clowning moments were all professionally constructed and well executed, but there was never a real sense of anything being at stake. As such, it took the house I was sitting in well over 40 minutes to respond to the acts – a gorgeous aerial display being the final push over from what had early been just polite clapping. This is not at all critical of the performers involved, who were astounding, but more confused with how the sets were created. Taking a couple out and allowing the others to develop more would have been wonderful, as was seen with the see-saw in the last few minutes – an amazing, kaleidoscopic wonder of people flinging themselves left, right and centre in the most dazzling contortions.

There were also some attempted sexual sections which, while amusing, didn’t feel like they fitted in to the piece as a whole. Perhaps the sets would gel better with a slightly more inebriated audience in a cabaret tent than in the renovated, formal arrangement of ZOO, with at least 5m between audience and performers. I was itching for something more raw, less controlled, more vulnerable with a soul instead of clockwork. Beautiful circus performances, yes, but there was very little substantial to connect them.