Review of: The Entertainer 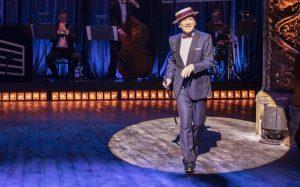 Kenneth Branagh’s 2015-2016 residency at the Garrick Theatre closes with John Osborne’s classic kitchen sink drama about the end of an artistic era – a fitting conclusion piece even if The Entertainer refers to music halls rather than a theatrical season. The play, which runs until 12th November, was broadcasted into cinema screens around the world on 27th October. The well-designed film broadcast unobtrusively showcased a fine production, perhaps hampered slightly by its reliance on tradition, with a strong cast and perfect pacing entertaining masterfully.

The play is an excellently unsettling one for today’s political climate, with the fading glory of colonial-era music halls and the occasionally racist, sexist humour (albeit always played with an awareness of the awfulness, never for audience sympathy) feeling close to home in the wake of Brexit and increasing xenophobia. Branagh and company are rather lucky that politics have played out as they have. The characters are never tempered, but allowed to be as misguided, deluded, and opinionated as the text calls for (the one possible exception being Branagh, who is just simply too charming a stage presence to be quite as despicable as Archie is supposed to).

However, this 1950s setting against the Suez Crisis and Britain’s fading colonial prowess hampers the play as a whole in this production. There is a sense that, were today’s events and sentiments about a ‘Great’ Britain not so similar, The Entertainer would here seem a nostalgia piece since no effort is made to connect it to today’s political climate and peoples. Even its excellent performances would not hit home as hard, as they would merely be people of the past struggling with national forces of which the outcomes are known. That said, the rich, contentious family dynamic conjured by director Ashford and the company pulls the focus from past politics and belief systems to modern living rooms, where opinions estranged by distance, time, and age begin to unravel the familial fabric.

The staging feels like an old movie in the best sense; the set design evokes a run-down music hall, the dance numbers the joys of old Hollywood musicals, and the family’s crisp RP the era’s own actors. Unfortunately, however, this ultra-traditionalist staging does little to comment on the action and contributes to its nostalgia issue. While the transitions between family life and Archie’s stage role are very sudden, this works; they are blended in with perfect timing and effectively illustrate parallels between the crumbling family and crumbling theatrical spectacle.

Leading the company, Branagh is splendid – perhaps a tad too polished and polite for Archie, but mesmeric, charismatic, dastardly, and commanding. Were The Entertainer merely his showcase, it would be worth the price of admission. Gawn Grainger, as Archie’s dad, brings a perfect mixture of cantankerous and lovable to his character’s ageing disillusionment. As Archie’s wife Phoebe, Greta Scacchi develops in depth as the show progresses, making her one of the most nuanced performers. Sophie McShera, playing Archie’s daughter Jean, hits the same note over and over in her politically idealistic character, but it is a solid, convincing note.

Compared to some other live theatrical broadcasts, there was only one relatively-static camera used. All shots came from the front of the stage, with small rotations to slightly reframe the picture and the occasional moderate zoom, usually on Branagh’s showman monologues. This camera work mimicked the views from the grand circle, putting the cinema audience in the best seats in the house. Additionally, this film style did constrict or shape the audience’s gaze on the action, as a film close-up does. It was an excellent, unobtrusive style that well suited the production and the theatrical medium.

While slightly stuck in nostalgia, Kenneth Branagh’s full-blooded production brings its beating, timelessly relevant heart to the audience – a commitment which leaves the performance well cemented in memory and highly recommended.

The Entertainer is playing at the Garrick Theatre until 12th November. No encore broadcast is scheduled as of yet. Performances are Monday-Saturday at 7.30pm (Wednesday and Saturday matinees at 2.30pm), with tickets ranging from £15-£59.50 on LoveTheatre.com.

Directed for cinema by Benjamin Caron

Set and Costume by Christopher Oram