Why do you enjoy directing theatre for kids?

I guess it is probably because they are the best audiences. Children have vast imaginations so as a director you can be hugely theatrical and wild. The worlds you create can be colourful and expansive. Basically they give you full license to ‘go for it’ because children are prepared to believe that flying carpets, dangerous wizards and, in this case, pirate dinosaurs are real. We are entering into the world of ‘play’ that children live in, yet the important thing is that they know they are playing. Imagination is a very serious sport! That’s why we, as actors and theatre makers, should take kids seriously, never patronise them and challenge them to dream wildly!

I direct many different kinds of theatre but making work for young people is probably my favourite simply because the audience are so important. If we don’t inspire and challenge the next generation to think creatively, to be brave, to question, to provoke, to dream, then who will?

What are the main differences between theatre that aimed at children and theatre aimed at adults?

I don’t think there is a huge difference in your approach as a director. I always think that a good children’s show is just a really good show. However, children are such a tough audience to please. If they are not digging something you are presenting to them they will start talking, wander around and (the final straw) ask to go to the loo! Imagine if an adult audience did this? It would be carnage!!! Therefore kids are the ultimate audience. If they don’t believe what the actors are doing, buy into the logic of the theatrical world or like the music they will make it VERY clear indeed. As a director I try to tune into my inner 5-year-old. In rehearsals I try and make sure he is happy! 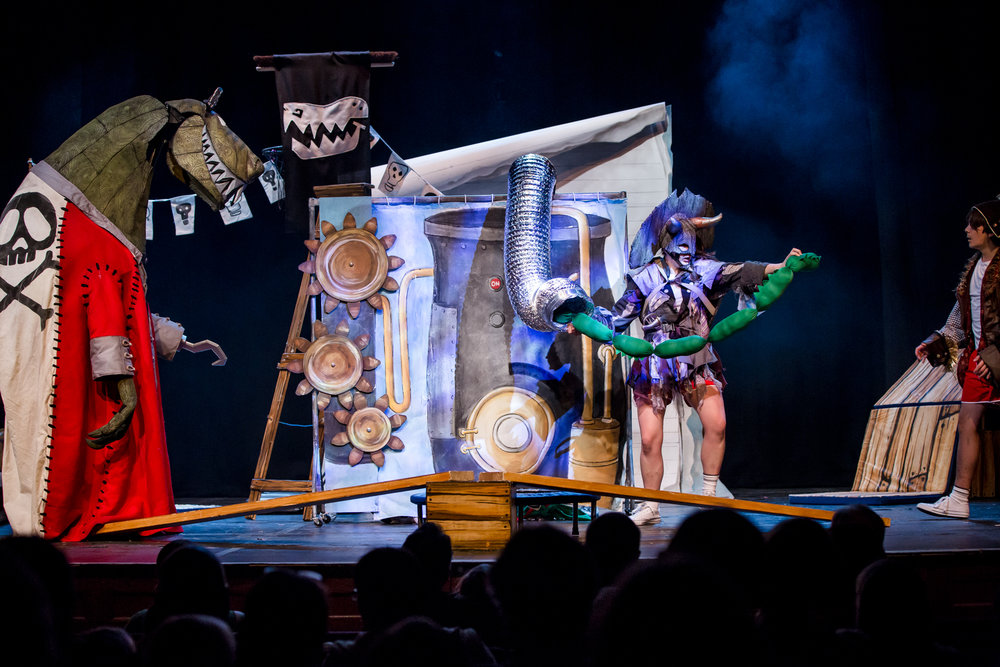 Photo Credit: The Other Richard

What was the process behind managing the page-to-stage adaptation of the children’s book?

Children’s picture books are so much fun to adapt as they are led by images and not necessarily words. When we rehearse we stick the images of the book all around the room to gain inspiration. But you have to put your own creative spin on things too – the book serves as an inspiration but we add our own flavours.

At the beginning of the Magic Cutlass process the creative team and actors looked at the beats of the story we liked the most and then added a few of our own ideas that felt true to the spirit of the original writing. Once Oliver’s (Lansley) script was ready we worked very collaboratively with the actors to create visual sequences and other comic routines. Our composer wrote some excellent songs that helped highlight particularly memorable moments in the story. We then put the script, the visual sequences and rehearsed songs together and hoped that, through lots of hard graft and honing, the show would feel cohesive. We only really know what kind of show we have once it is in front of the kids. In the first previews we learnt a lot about the show and its impact.  This is usually the time where we add the detail to the performances to make sure they are really well nuanced. Once the first few previews were out of the way the show was officially ‘open’. The adventure had truly begun!

What are your main theatrical influences for this particular show?

Well obviously you can’t help but look at the big dinosaur stories (Jurassic Park, Conan Doyle’s The Lost Worldetc) and the big pirate ones (Peter Pan, Pirates of the Caribbean). There is plenty to creatively plunder (forgive the pirate pun) here! There are certainly elements of horror and farce in there too. Musically a huge range of artists and genres inspired us, from Queen to Disco music, Hans Zimmer to Dubstep! 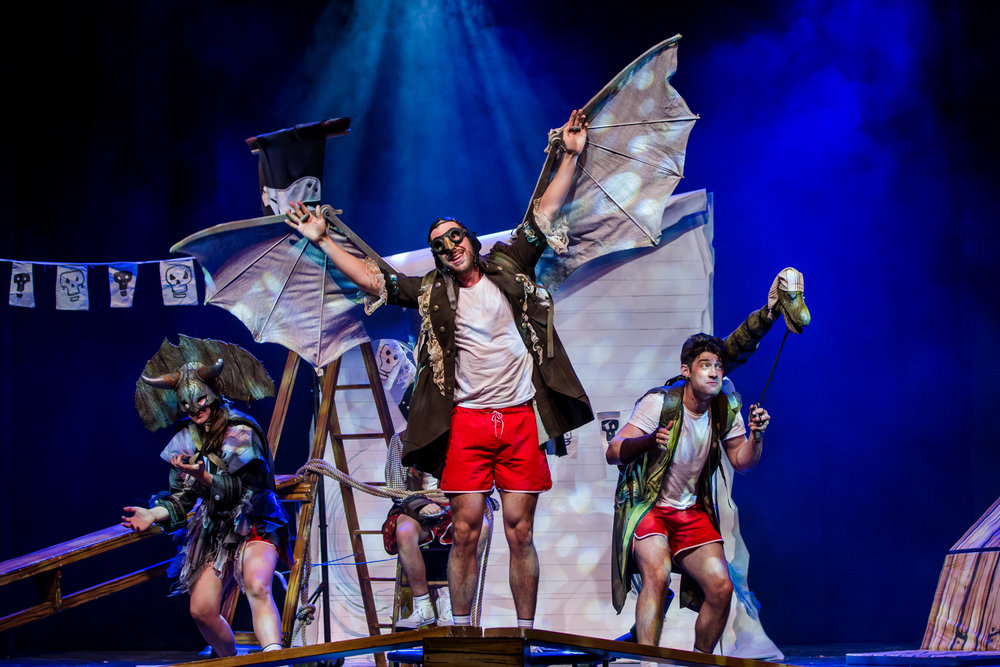 Photo Credit: The Other Richard
info@theotherrichard.com

Do you think that there are dangers in doing theatrical sequels? And if so, how did you overcome them?

It is worth saying at this point I did not direct the first Captain Flinn (although I did see it). This is a very different show in terms of style, writing and music but obviously there are lots of links with the first stage show. I’d like to think this works very well as a stand-alone piece and there is no real need to have seen the original. Sequels in theatre are quite rare (unlike the movies). I like them. Let’s see more stage sequels! There are more picture books in the Captain Flinn series, so don’t rule out a theatrical trilogy!

What was/is your favourite part in Captain Flinn and the Pirate Dinosaurs 2 (either in rehearsals or in the finished production)?

Our rehearsal room was full of laughter; we had to work out how a Diplodocus sings, how to explode a sausage machine and how to use a wish-granting cutlass! However my favourite moment is probably during the show itself, when Mr T-Rex sings a barnstorming rock number about eating ‘Unlimited Fish Sausages’. Doesn’t get much sillier than that.

What advice would you give someone trying to start in directing children’s theatre?

Go and see lots of work for children. Work with children through workshop facilitation so you can get to know your audience first-hand. Create a company and make your own work so you can discover what your style is. Tour that work, even if you make no money to begin with. Meet programmers and artistic directors of theatres. Try and work as an assistant director on a large-scale family show. Be nice. Work very hard. Write stories. Dream big…. That’s what children do so why should you any different!

Captain Flinn and the Pirate Dinosaurs 2 is about to carry on touring around the UK. You can find out more on Les Petits Theatre website here.