Review of: Ivy at the Southwark Playhouse

An emotionally exhausting play in a wonderful way , requiring constant awareness of not only the action, but the other audience members, gloriously suspense- filled. IVY is a shocking, well written, beautifully perfomed play,with recurring themes of reincarnation and the juxtaposition of the elderly and the young, life and death.

IVY is another impressive and thought- provoking show created by the partnership of playwright Helena Thompson and director Mel Cook (previously seen in ARTHUR’S WORLD).

The mystery of the play begins with the secret location of the performance, only revealed once you’ve booked. The audience is greeted in a bohemian waiting area and offered a  non-descript hot drink that was sweet, yet bitter, before we are taken downstairs and invited to explore the space. IVY  appears to be the story of an elderly woman (Leda Hodgson) who refuses to leave her squat in the basement of a condemned building. Her home is broken into by a young woman (Charlotte Salkin) searching for money on a dare from her gang. This rather simple premise blossoms into something more than a play, it’s an experience.

The immersive nature of this play makes constant awareness of your surroundings necessary. We must decide where to move and who to watch. I often caught the eye other audience members, before hastily looking away, a new and disconcerting experience. We are all part of the story, as if we’ve broken into Ivy’s home with the girl. This requirement for heightened observance means you notice things you never expected, we are watching real people in the space, rather than characters in a play.  Hodgson and Salkin both demonstrate impressive concentration and commitment to the belief that they are alone. In a play where each audience will behave unpredictably, both actors not only delivered the play impeccably, but also managed to engage the whole audience wherever they are stood.

Near the beginning of the performance Ivy offers the girl a drink, which she mentions tastes sweet, but bitter. We are told the drink contains valerian, heliotrope and wormwood. Suddenly all of us who accepted a hot drink are questioning, perhaps irrationally – what did we drink? The tense atmosphere is subtly taken to a new level, no line in this play is redundant. 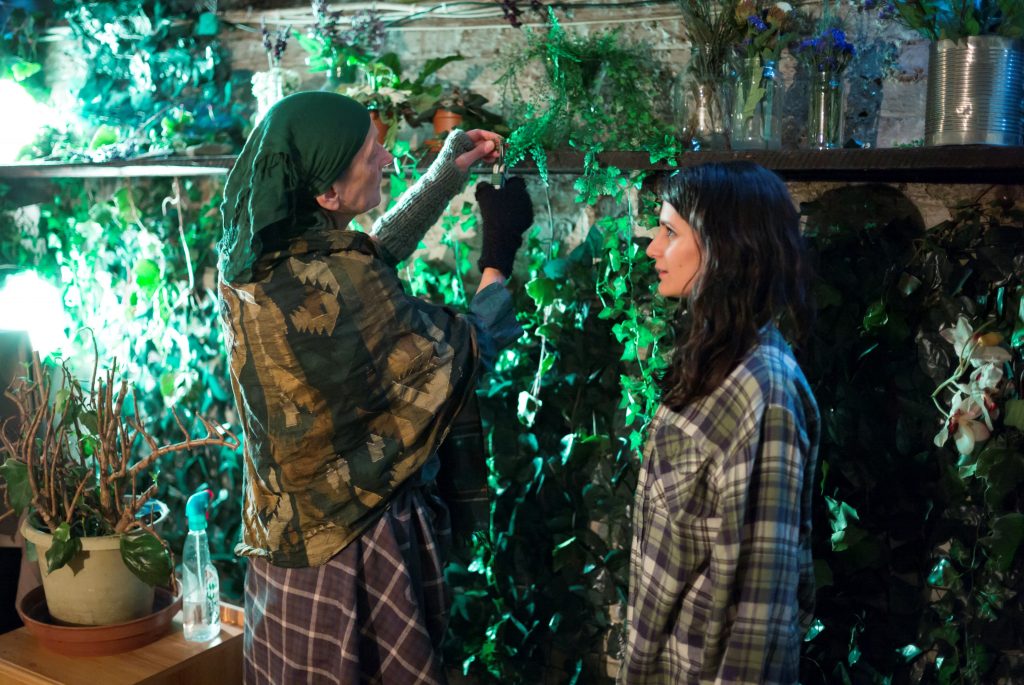 As the play moves forward we discover more of the basement, so uniquely designed  by Emily Megson and cleverly lit by Greg Jordan. At times the audience is left in darkness with only ambiguous sound effects for company. The sounds created the feeling that a vicious gang were waiting outside and demolition had begun. All rational thought of the outside world leaves you when you enter IVY. When a radio turns on without being touched, it seems plausible that it is magic, anything is possible in this hedera (or ivy) basement.

The whole play is a fascinating power struggle between these two woman, it’s a compete grey area– whose side are we on? The audience can relate to aspects of both characters – the stubbornness of Ivy, refusing to leave her home, the helpless and confusion of the girl who doesn’t know where she stands in the world.

Thompson takes two characters who are invisible and shunned in the eyes of society, an elderly homeless woman and a thieving youth. She demonstrates the unlikely relationship and the similarities between them, all in the context of mouldy basement, covered in ivy.

Due to popular demand, IVY has extended its run till 21st December.