Review of: Much Ado About Nothing

A vibrant, delightful promenade performance of Shakespeare's prototype screwball comedy that'll bring sunshine to your evening, whatever the weather. 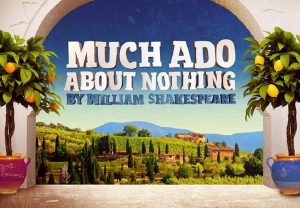 Iris Theatre’s production of Much Ado About Nothing is a triumph. Superbly directed by rising talent Amy Draper and taking place in the beautifully blooming gardens of St Paul’s Actors’ Church in Covent Garden, it’s hard not to be charmed by this pacey, stylish promenade performance of what’s been called Shakespeare’s most modern comedy. From its colourful look and vivacious cast to its confident communication of the play’s plot and humour, it feels both classic and fresh, and will appeal just as much to seasoned Shakespeareans as to Bardic beginners.

The cast was energetic, talented and hugely likeable, with outstanding on-stage chemistry that rendered it even greater than the sum of its (very formidable) parts. The individual performances were all very much to be commended, but it was the rapport between the players that really shone through Much Ado’s many double acts. Emma McDonald and Anne-Marie Piazza, who also ably played the romantic leads of the play, delighted the audience with partially-improvised buffoonery as officious bobbies Dogberry and Verges, providing a refreshing change of pace after the interval. Meanwhile, the chameleonic Jennifer Clement’s Don Juan served as a marvellously sinister foil to Nick Howard-Brown’s foppish ne’er-do-well, Borachio, while Darrel Bailey, Graeme Dalling and Denis Delahunt shared brotherly camaraderie as the amiable but horrendously gullible trio of Don Pedro, Claudio and Leonato. The characterisation of the play’s two central romances were well-executed and contrasted nicely with each other, with McDonald and Dalling conveying Hero and Claudio’s starry-eyed naïveté as proficiently as Howard-Brown and Piazza realised Benedick and Beatrice’s smarter, snarkier and more modern-flavoured dynamic. It would have been nice to see a little more of a journey taking place in the latter: a change in the tone of their repartée from barbs designed to sting to a tender game played by two lovers who, despite their articulacy, can’t quite bring themselves to openly express their feelings. There were also some moments – those of crisis – that felt like they could have had a little more of an impact, and in particular a sense of genuine threat and panic. The individual performances at these times ranged from fine to outstanding (particularly the slow buildup of Hero’s anguish during the wedding scene), but in the group, the tension fell just a little short of convincing us that something truly dreadful had happened. However, this was more than made up for by the play’s more joyful moments, which were infectious in spite of the evening drizzle. Projection was also outstanding, with every word as clear loud and clear as the bells of St Paul’s, despite the outdoor performance space, the rain and the nuance of the performances.

The cast’s excellent work was supported well by an adept creative team. Amber Scarlett’s clever set design managed to incorporate the stunning surroundings of the church while including its own ingenious flourishes, such as columns whose negative space created the optical illusion of a female figure. Candida Caldicot’s music for the play (performed live by the cast) was gorgeous to listen to, and an intriguing canvas for the Shakespearean lyrics. The soulful, acoustic arrangement of ‘Sigh No More’ did feel slightly anachronistic against the play’s fanciful, vaguely mid-20th century costume aesthetic (designed by Kinnetia Isidore and made by Charlotte Wainwright), but, like the costumes themselves, it added another vibrant splash of colour to the richness of the play.

Everybody involved in this production has a great deal to be proud of, and I have no doubt that audiences will give them the adulation they deserve. It is an enchanting, uplifting, fun, and beautiful rendering of Shakespeare’s story, and I cannot recommend it highly enough.

Much Ado About Nothing is playing until the 22nd July at the St Paul’s Actors’ Church in Covent Garden. Performances start at 19:30 (with Saturday matinees starting at 14.30) and run for two and a half hours, with a fifteen minute interval. Waterproof ponchos are provided on wet days. Tickets can be booked at http://iristheatre.com/event/much-ado-about-nothing/#tickets.