Angst driven and an Electra for a modern age

In an age where everything, at least in urban communities, has to be fast and immediate- fast food, fast broadband, immediate replies to emails/texts and fast cars,  [which heralded the beginning of the speed movement at the beginning of the 20th Century] this rather modern feeling production of Sophocles’ Electra in a version by  Frank McGuinness, directed by Ian Rickson and staring Kristin Scott Thomas, fits right in. 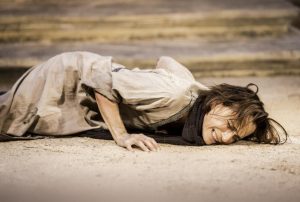 Electra is a wound- not just a woman seeking revenge [and to please the gods, a phenomenon that has not aged] but an actual gaping writhing wound of an ego who cannot forget- and will not forget- the murder of her father Agamemnon at the hands of her mother Clytemnestra and her lover Aegisthus. Thus she must have her revenge, if not directly, then in directly through the returning Orestes, her brother, who, also fearing the hand of his mother, disappeared in order to save himself.

I’m writing this review after coming from a talk by Song Hwee Lim on Tsai Ming-liang and the cinema of slowness. It’s relevant because what struck me most about Kristin Scott Thomas’ Electra was the frenetic movement on stage, her almost constant inability to be still, her prowling around the stage like a caged animal. It’s rather like watching a film where every shot lasts 2 seconds.  What’s at issue here and fittingly so, could be the globalization of speed, on the inability, especially in urban communities, to be slow, to wait,  almost as if to be slow invites more pain, more thought, more meditation- to be fast leaves no room for consideration, in this production it increases the anxiety of Electra [and the anxiety of the audience, perhaps a modern audience that has been taught to forget about patience], and as sure as a car being driven from A to B knocking down everything in its path, it’s an anxiety and speed which feeds Electra’s ego- and egos love to be fed.  We are watching a woman whose identity is being eaten by her own need for revenge.

There have been comments that the pace and the expected cathartic ending have produced an anti climax, but this is totally right.  It shows us that the need for revenge and the fulfillment of that need is a hollow victory and suggests that the desire, like the circular stage, is a cycle out of which one can never step, or that the ego, once having achieved its aim, will find some other form to attach itself to.

Mark Thompson’s stage is simple and earthy and reminds us of that Confucius quote that if you embark on revenge, then dig two graves. Its dust, with the tree, as if representing the spirit of the father and around which Electra and Orestes hover, strikes up like a stark crucifix in a Casper David Friedrich painting, and the tap to which Electra is also drawn, has a double meaning- wash away the tears and forget, or clean oneself with the waters of revenge.  The circular stage is the all seeing eye, the cosmic unity, the nature of cycles [reflective of the music by PJ Harvey, whose recurrent themes seem to reassert that this is the nature of how things are] , the ideology within which, Electra, for all her modern angst, is trapped. Around her dance other moons and planets, Jack Lowden as Orestes, passive and reconciled to his duty, Diana Quick as Clytemnestra whose attempt at poise masks a deep arrogance and fear but in contrast to Electra’s hysteria, and Peter Wight as the servant, who provides the warning and moral authority. Yet their stillness can do nothing against this flying arrow and Electra’s racing everyone towards their fate with her desire for revenge- and considering all that is happening in the world around us, her break down, loss of self and the ego’s need to reassert itself, is something we all too familiar with even on the world stage, where the speedy and instantaneity of revenge attacks and its modes of expression where social media is its platform,  is carried out without pause for thought. This production, with Electra’s need for instant revenge and satisfaction, is an uncomfortable and pertinent mirror of this modern day ill.

Angst driven and an Electra for a modern age, the production runs at the Old Vic until 20th December book here