It may be an exaggeration to say that everyone knows the story of Orpheus and Eurydice – case in point, the couple behind me trying desperately to remember their high school education pre-show – but having historically been one of the more widely adapted Greek myths, I think it is fair to say that if you plan on reworking it yourself, you had better have something new to add to the mix. Thankfully, it would seem that writer and director pair, Anaïs Mitchell and Rachel Chavkin, were also of this opinion, and have succeeded in creating something wild and rare in Hadestown. 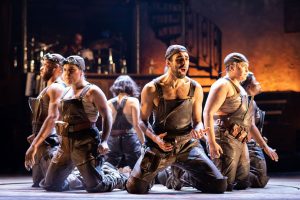 For the couples-behind-me of the world, the main elements of the Orpheus myth are all present in one way or another. A gifted poet and beautiful nymph fall in love; the beautiful nymph is trapped in the Underworld with Hades; the gifted poet, being given a trial by Hades, attempts to rescue her, but ultimately fails. Except in this version, the poet is a poor musician with more faith in music than capital, the nymph is a hungry girl at a bar longing for the Summer, Hades is a big-business autocrat, and the Underworld is Hadestown – his fascist, industrial realm.

Anaïs Mitchell’s creation first manifested as a concept-album-come-experimental-song-cycle ten years ago. You can feel the echoes of a loose structure in the plot that does feel slightly lacking in places – the lovers’ story is not fleshed out, and other characters are on the whole lacking a bit of depth. Such things can be forgiven in the light of the contextual origin, however. That is to say, the purpose of Greek mythology was not necessarily to follow long character arcs, but to build a commentary – philosophical or psychological – on the workings of the world using archetypal characters that needed little to no introduction. Where this show excels is in the mythology of its story, where it is volatile is along the thin line on which the cast is allowed walk without treading too far into melodrama. 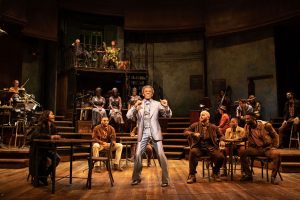 Fortunately, this cast and their musicians hold the soul of the show with divine conviction. Tension that could have easily been overplayed is beautifully handled and we’re pulled into the story from the minute the cast take the stage. A silver-suited, crooning Hermes (André De Shields) is there to expertly guide us through the tale with charisma to spare. Our Persephone (Amber Grey) is erratic and electric against the dominating and merciless figure cast by Hades (Patrick Page). Our Eurydice (Eva Noblezada) is canny and engrossing, and all of the cast are vocally unmatched. The only shaky performance comes from our Orpheus (Reeve Carney), whose innocent sincerity thankfully covers this well, and, having said this, he holds his own against a powerful falsetto track originally sung by Justin Vernon (of Bon Iver fame).

The crux of the tension and apex of the show has been divided between Hades’ decision to let the lovers go, and Orpheus’ doubt leading him to fail the so-called trial. Of course, almost pantomime-esque, we all know how the story ends – it is an old song, after all – but, as Hermes points out, human nature dictates we are doomed to hope that it will turn out differently next time.

Deceptively simple and reiterative lyrics mask an uncommonly complex and intelligent show. The original aetiological and psychological nature of the ancient myths has been stretched out and woven into a brilliantly modern and eerily apt rendering of the nature of humankind. Ten years in the making, Mitchell’s world is an uncanny prediction of our own dystopia. It is unabashedly Marxist, which could come across as depressing, were it not also so full of truth. The production, in fact, defies classification. It’s not a traditional musical, and it’s not a didactic myth, though I’d be loathe to say it was somewhere between the two as well. There’s no lesson or moral to be learned here – just a mirror held up to a waning world. It’s an old song, and it’s a sad song, and truly it has been sung again and again.

Hadestown is at the National Theatre’s Olivier Theatre until Saturday 26th January, at 19:30 (with some Tuesday, Thursday and Saturday matinees at 14:00). Tickets are available here