This coming of age tale is a tormented love story, authentic in its representation of drug-dealing online.

In the world of the dark web, it’s easy to turn knitted tea cosies into a global cocaine business. At least, that’s what happens to Bruce, a young guy from the North East just trying to achieve something that will make his loved ones proud in Alex Oates’ outstanding Silk Road. 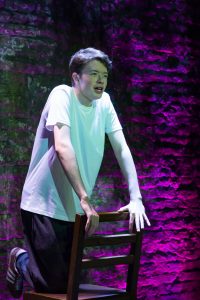 Bruce isn’t interested in going to university just so he can compete with others to fill his brain with knowledge. So he waves goodbye to his girlfriend who’s off to Portsmouth and stays at home with his 84-year-old Nan; his lovable proud Nan who classes herself as a local celebrity because she was photographed in the newspaper giving flowers to Princess Anne (or she likes to pretend she was).

He ends up working as a DJ in a bar owned by the notoriously erratic and dangerous Mr Shaggy, who also happens to be the local drug dealer and a huge Michael Jackson fan. But when Mr Shaggy humiliates Bruce in front of his (now ex) girlfriend, he takes the Silk Road, not the high road.

After a debut at the Edinburgh Fringe and a run at the Vaults earlier this year, Silk Road has landed in the West End for the rest of the month. The play made history as the first to be funded by the cryptocurrency Bitcoin – following a call out on the real Silk Road forums, an anonymous donation of two Bitcoins brought the piece to life.

This might seem unusual for a play which appears to be about the dangers and risks of an unregulated web, but Oates’ is clearly praising the anarchic freedom and pioneering spirit of those using the internet to fight back against repressive drug laws. This is a web that allows anyone, even a ‘nobody’ from Whitley Bay, to make something of himself.

Josh Barrow is the tour de force who turns this monologue into something like a shot of adrenaline – he plays Bruce, but also Nan, Mr Shaggy and his musical theatre-loving bouncer, with smooth dexterity. Under Dominic Shaw’s sharp direction, the scene changes are heart-stoppingly fast, and along with excellent lighting effects from Rachel Sampley, help make this play an exhilarating ride.

Oates’ paints a brilliantly vivid and funny picture of life in the North East – Whitley Bay is like ‘if Las Vegas and Blackpool had a child that was deprived of oxygen’, and the jokes come so frequently at points it almost veers into stand-up.

The title of the piece is a bit misleading in the sense that the majority of the play isn’t about how to buy drugs online – there’s so much more to it than that. This is a coming of age tale and a tormented love story, about a young man struggling to find his place in the world while also dealing with a long-distance relationship and heartbreak. Yes, Bruce’s monologue provides brief practical descriptions of how the dark web works, how to hollow out books to hide drugs, and how to send them in the mail to be delivered by your run-of-the-mill postie, something Bruce takes great delight in.

But this play, even in its hour-long brevity, goes beneath the surface of the dark web to reveal the real face of the pirates exploring these murky waters. It’s clear that Oates spent time interviewing online drug dealers to inform his piece, and the authenticity pays off.

Silk Road is at Trafalgar Studios 2 until Saturday 1st September, at 19.45 (matinees Thursday and Saturday at 15.00). Tickets start at £20.00 and are available here.