Review of: So Many Reasons

Calm Down Dear, the annual feminist festival at Camden People’s Theatre, is this year celebrating its sixth birthday. The show is headlined by So Many Reasons, a one woman piece starring and written by Racheal Ofori, is a classic coming of age story, dealing with religion, the tricky topic of mother-daughter relationships, and, perhaps above all others, sex. 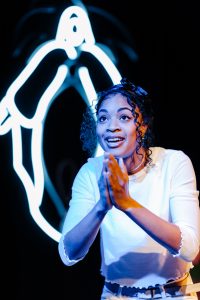 Ofori’s Melissa is charming and funny, able to segue easily between the serious and the lighthearted, and we see her grow from around eight years old to mid-twenties. She also effortlessly shifts between characters, taking on Melissa’s sister, mother, uncle, school friends, and various lovers in turn. With only a few neon props  designer Tanya Stephenson brings us entirely into Melissa’s world. The backdrop of a brilliant neon sign that morphs together genitalia, palm trees, and Jesus is stunning and truly has to be seen to be believed.

And yet, it never really becomes clear why we’re there. Nothing in the show rings false – the problem is that none of it feels particularly insightful either. The hunt for the female orgasm feels like a pretty dry topic at this point, and it’s hard to invest emotionally in Melissa’s tragedy when we’re never quite sure exactly what she’s fighting. Is it a journey of self-acceptance? Is it about negotiating ones’ relationship with God? Is it about forgiving our families? Is it about men and bodies? The show tries to tackle all of these issues, but in doing so never quite realises any of them. The piece, initially formally bound by future-Melissa praying, ends up disjointed, a series of episodes that don’t quite link together. Even the emotional ending, of Melissa reconciling with her sister, is such a surprise it’s hard to register.

It can’t be denied, though, that Ofori uncannily captures that mid-twenties, existential feeling. The fragments and the tangents in the story she tells, while not necessarily immediately relatable, are entirely real – and perhaps this is what a feminist festival should be: listening to and accepting the stories of those around us.

So Many Reasons is at Camden People’s theatre, London, until 3 February. Then touring. Calm Down Dear festival runs until 4 February. Box office: 020-7419 4841. See our interview with Racheal Ofori here.