Chekhov has reached a point in our society where, like Shakespeare, his plays are used as a springboard, an assumed shared reference point that companies can build their productions around. We have all seen the production products of these ideas, whether the successful or the disastrous. The Volcano Theatre company’s play of Seagulls, a reworked version of Chekhov’s The Seagull, manages to straddle both of these. It is a show both spectacular and odd – and, as far as Fringe experiences and Fringe theatre go, I cannot recommend seeing it highly enough. 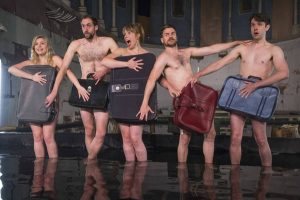 When we enter the gutted church in Leith, the cast of five are suspended above the stage, hanging down as if asleep. It’s a striking image that sets the tone for the rest of the evening; Seagulls is a production that constantly experiments with and rejuvenates the text it is based on, not to mention the space it is performed in. Some of these experiments are of the highest quality. While others fail, I could not help but think that this failure proves how good the show really is. With their production, Volcano Theatre push boundaries, try things out, and see what works. It is inevitable, then, that some of it doesn’t.

Volcano Theatre have used the space of the church incredibly well: there is scaffolding all around, simultaneously allowing the actors to perform aerial feats, and reminding us how newly built this stage is. Indeed, this is incorporated into the play – the fresh wood stage that the actors stand on doubling up as the setting for Konstantin’s premier. We sit on benches, initially in traverse and then moved (in a clunky, unnecessary switchover) to end-on. The real joy of the set is, however (spoilers ahead!) the moment when the giant sheet at the back of the stage is pulled down, revealing that the rest of the church has been flooded. This, functioning as the lake for the remainder of the performance, is perhaps the star of the show. The water is beautiful, reflecting the lights back up the walls of the church, and the riotous fun the water allows the actors to have in the pool could not be faked.

The acting and direction are, in general, stunning and believable. Mairi Phillip’s performance of the apparently fading Irina is hilarious, and meshes wonderfully with Christopher Elson’s Konstantin. None of the gimmicks take away from the standard of the performance, and it is commendable that the actors are able to do this alongside the swimming, lifting, dancing, and audience manoeuvring required. There are some elements that do not work – a physical theatre sequence following the first act feels misjudged, and the final act could be cut significantly. These moments sadly bring the show down (while the rest of it is easily five star standard), but don’t let them put you off! This production is the epitome of what the Edinburgh Fringe should be about, and is worth seeing whatever its flaws.