Camden Peoples Theatre’s festival of feminist work, Calm Down Dear, is celebrating its fifth birthday in 2018. This year artists of colour are in the spotlight, with Racheal Ofori’s So Many Reasons headlining the festival. This is Ofori’s return to the festival, after her successful first show Portrait premiered at Calm Down Dear back in 2015. So Many Reasons is an exploration of motherhood and generational divides, told through the eyes of a British Ghanian woman. We chatted to her just after rehearsals had begun. 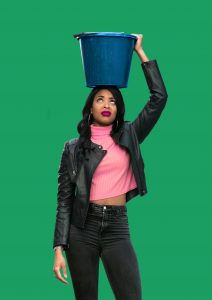 How are rehearsals going?

Really well! We’re having a lot of fun, and it’s been interesting for me. My process is that I like to have it all written down before we go in, or at least as much of it as possible, rather than doing loads of improvising. I think maybe it’s the nature of this piece as well, that it is quite poetic – I’m not a freestyle poet, I can’t come up with that straightaway!

It’s a really great atmosphere as well, with just three women in the room. I’ve been thinking a lot about my career, and auditions that I’ve gone for, or meetings that I’ve had with people, and I feel like I’ve been very lucky to work with so many great women in an industry that is very much populated with men. It’s amazing to be in a position where I’m being funded to tell this story by and about women.

Tell me a bit more about So Many Reasons: why this show, and why now?

It’s a story about a girl who’s going through a lot of battles with what she’s grown up being told – from her friends, from her girlfriends, from her mum and her sister – and a very heavy part of this has been religion. It might not seem like it’s such a topical issue at the moment, but I think that faith and believing in something is always going to be integral to us as human beings. Watching somebody depart from something that they’ve always believed in is a fascinating thing to see. And it’s particularly about sex, that’s what she’s battling with God about. Everyone always loves talking about sex anyway, but it’s particularly interesting looking at it through belief, which doesn’t have to be religion anyway. It can be something like believing in a relationship that wasn’t real.

How about motherhood, how does that play into the show?

Growing up, our mums tell us so much that affects who we become, and it affects you in a way that you either go ‘fuck that, bye’, or you internalise it all. At some point in your life, which is what I find really interesting, you’re confronted by the mortality of the mother. She’s no longer this huge being that knows everything, and you’re like ‘wow, life has actually been really hard for you!’. You realise that your parents are just people, who’ve had their own lives. I think about my mum, and when she was my age she had three kids! It’s good to see it on stage, that exploration of mortality and mothers as human, rather than women just staying mothers.

How are you finding working with CPT again? Is there anything else at the festival you’re looking forward to seeing?

I’ve built up such a good relationship with CPT, with my first show being here three years ago. I just came with a show that I’d written, which was also kind of a work in process. It’s nice to come round full circle and be headlining the festival now. There’s a real strong foundation there, and it feels like a real level up to now headline Calm Down Dear.

There’s a show on as part of the festival called Sexy, which I’m really excited for! I’m just going to try to see as much as I can. We’re on first, so I just need to stay, don’t need to travel or anything!

The show will be fun! I know I’ve probably sold it as a really serious thing, like a grappling with god, but there’s loads of fun stuff in there too, and dancing, that’s going to happen. I’m really excited to be doing this story with loads of other characters contributing to the narrative. It’s a challenge I’m looking forward to.