Review of: Cathy by Cardboard Citizens

Cathy is the Fringe debut for Cardboard Citizens, a London-based company creating theatre with and for homeless people. Performed by a strong cast of four, the play is a stripped-back remix of Cathy Come Home, their adaptation of Ken Loach’s TV drama staged at the Barbican and broadcast online. Like Zeldin’s extraordinary play Love, Cathy demonstrates how easily an individual can become trapped in homelessness. It is a powerful play, about a vitally important issue. It would seem from post-show legislative discussion that the show left a lot of its audience angry. The use of Cathy Come Home as a semi-source text suggests that we should be angry exactly because, even fifty years after it was first aired on the BBC, it is still a relevant testament of our times. 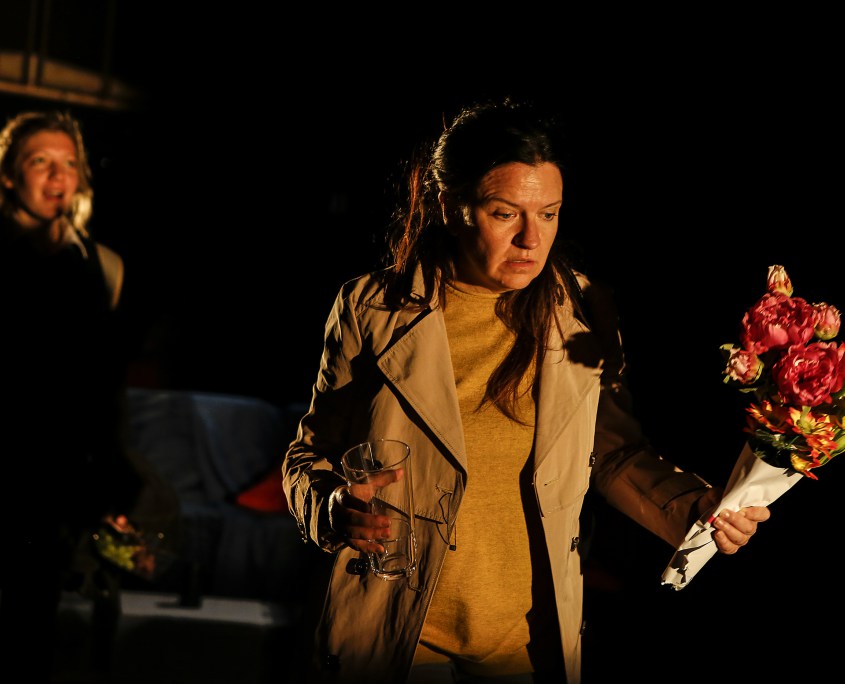 The play shows a series of encounters through which Cathy (Cathy Owen) and her daughter Danielle (Hayley Wareham) find themselves in increasingly desperate situations as their supports – family, work and accommodatio

n – collapse around them. Two other actors – Alex Jones and Amy Loughton – capably play all other ro

les. The show’s scope is intelligent and broad, incorporating the company’s extensive knowledge of the causes of homelessness. Accompanying the action are short documentary snapshots of real experiences of homelessness from those Cardboard Citizens have met, which are projected onto a slowly collapsing block tower. They tastefully provide context to the cruelty of the system depicted onstage.

Because of the subject matter, the show is unrelenting in its descent into despair, although the optimism of Cathy consistently and heartbreakingly shines through in scenes with her daughter. It is the stellar performances in Cathy that elevate it beyond a piece of educational theatre (although it has toured extensively to schools and prisons as well as theatres). Owen is an extraordinary actress – one of those true talents who can make us believe a character’s extraordinary tragic journey of years compressed into an hour.