While the simple serves this production well, the characters deserve more complexities

On entering the theatre to see Bare Skin on Briny Waters, I (not for the first time this Fringe) very nearly tripped over their set – and then (for the first time) heard something crack. Fragments of mirrors, arranged in a rough circle on the floor of the stage, were placed in a way somehow both haphazard and careful. I don’t know if it was intentional, but while the cast of two moved around the set we could hear more bits of the mirrors cracking. In a show that never strayed too far from the real, it served both to remind us of the artifice at play, and of the fragility of the lives it described. 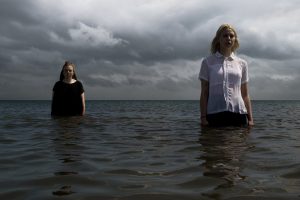 Other than the gorgeous set (the mirrors of which reflect the lights onto the ceiling – a beautiful and intelligent way of maximising the usable space), what we see in this play is very unassuming. Two women tell stories that occasionally interact, taking turns to speak about their lives, with the composer/musician sat between them. The play is underscored with simple guitar music, adding urgency when required. The two women, Annie and Sophie, are both struggling in their relationships: Sophie is building up the courage to leave her abusive husband, and Annie is thrown off course when her boyfriend wakes up from a coma. This structure works well for the play, and we feel small moments of glee when we recognise one of the women in what the other describes. I did feel that Sophie’s half was much better written than Annie’s, whose lines drifted a little too often into cliché, and their voices needed more distinguishing than this. Both actors gave strong performances though, barely breaking eye contact and revelling in the intimacy of the space.

What was frustrating to me was that, despite an almost entirely female production team, the whole of both narratives were about men. I wanted to know more about who these women were outside of their male counterparts – and yet, perhaps that frustration was the point of the play.

Bare Skin on Briny Waters is Bellow Theatre’s contribution to the Hull takeover at the Fringe – we have also reviewed All We Ever Wanted Was Everything.