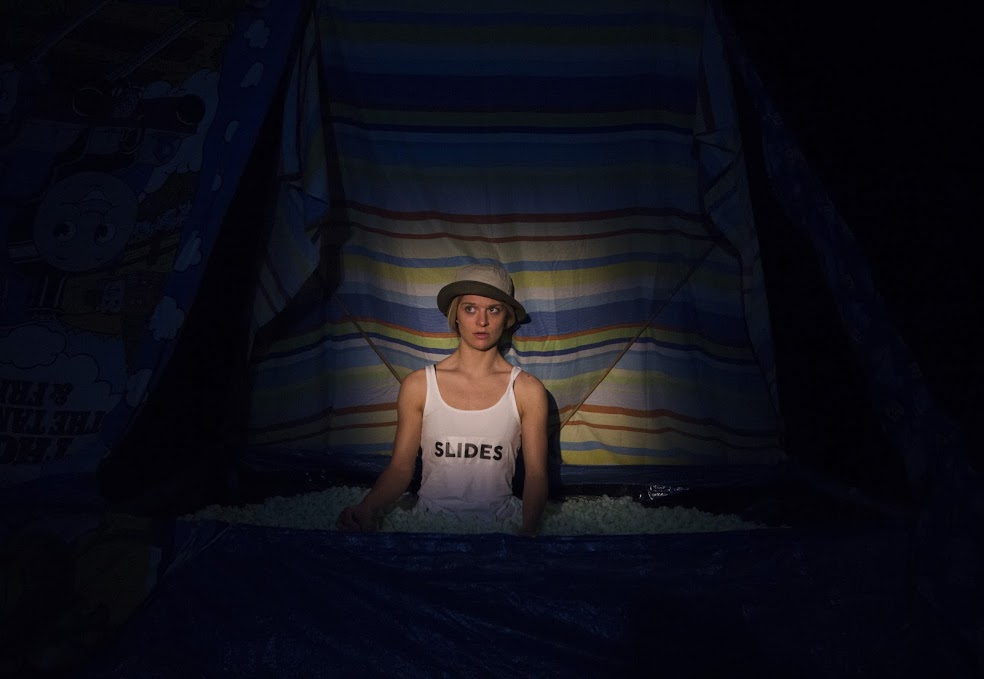 Thlides  is the latest offering from Dirty Rascals Theatre, the company behind Of Nymphs and Men – which Theatre Bubble called “a powerful piece… daring and intriguing theatre”. Thlides is a surreal dark comedy examining death, loneliness and soup, through the eyes of an army veteran called Spawny John and an inflatable duck. We spoke to Pavlos Christodoulou, the production’s director.
.
Theatre Bubble: Camden isn’t hosting the only Fringe Festival this August – what makes the Camden Fringe different?
Pavlos Christodoulou: Money is a huge factor when thinking about Edinburgh vs Camden. I think it does make a big difference because it’s almost impossible to really take a risk in Edinburgh. Most of the work has been performed all over the country and vetted before going to Scotland. While this does create work of an exceptional standard, I think a lot of the excitement of fringe theatre comes from people trying something out, not knowing if it will work but putting themselves out there regardless. I think Camden is great for that.
.
TB: What inspired the writing of Thlides?
PC: When the writers first talked to me about the play what struck me was the way they captured the experience of being stuck, of stagnating and not knowing how to move forward. Thlides is about many things but that feeling is at its heart.
.
TB: Your company, Dirty Rascals, aims to create work that is “living, untidy and playful”. How does this translate to your rehearsal process, and to how you create your shows?
PC: One way we achieve this is by spending a lot of time building characters and the world they live in, predominantly through improvisation. I believe that when actors have confidence in these details a play is so much more alive. Performers are able to exist and play within the piece rather than feel bound to one way of doing things.Now, when we talk about ‘untidy’ theatre that’s about making sure there are no easy answers to the questions our work raises. If an audience leaves a show confidently believing that they understand every aspect of a play then they’re leaving unchallenged. The best stories leave you wondering for a long time.
.
TB: How has creating this production been different to the process behind your last production, Of Nymphs and Men?
PC:Nymphs involved working over an extended period of time to create characters from birth to the modern day. Then I threw those two characters into a series of improvisations the week before the show and created the content of the piece – although the performances remained partly improvised. This time round we had the story from the beginning. The process became about making sense of this absurd world for us, asking how it started and why, and what its rules are. It is essentially working in reverse, deconstructing rather than constructing.
.
Thlides runs from the 21st – 23rd August, at The Lion and Unicorn Theatre. Buy tickets here. 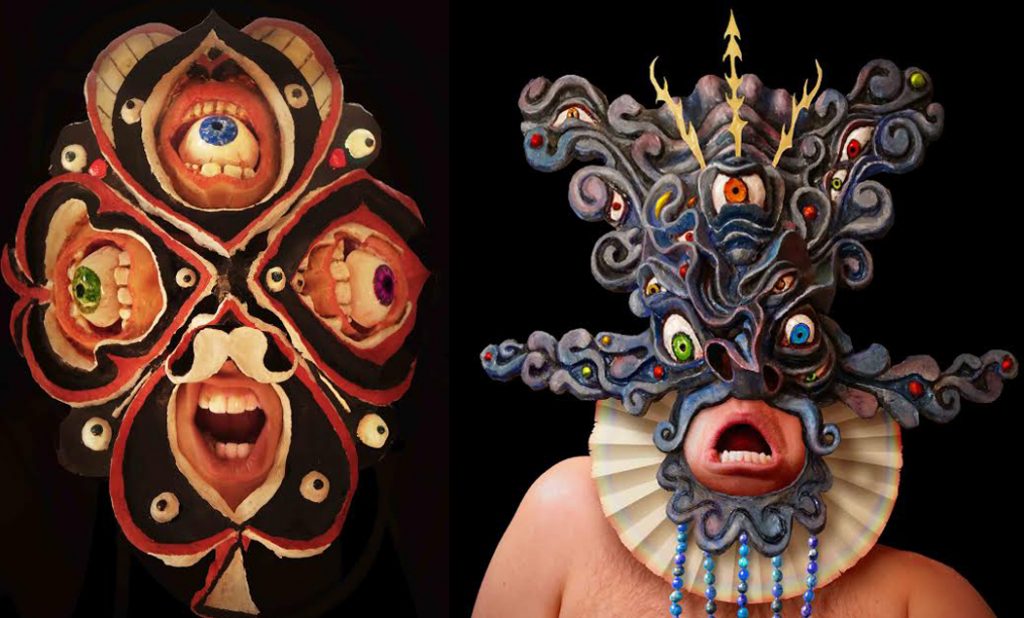 Two of the masks from HunkyPunk’s show KUNST?

KUNST? is “a comic nightmare” from innovative and bizarre mask-theatre company HunkyPunk. An elderly couple’s ritual squabble over an evening’s television is distorted into a series of surreal comedic episodes. Mask, stunningly elaborate visuals, physical humour, poetry, song and dance collide and fuse to show a familiar scene of domestic passive-aggression through an absurd comic lens. We spoke to Artistic Director William Tombs about the show.

TB: What makes the Camden Fringe different?
William Tombs: Well, for us the Camden Fringe feels like coming home – We’ve been doing shows on the Camden Fringe intermittently since 2007 when I performed my one-man show What the Lobster Shouted as it Boiled. I’ve seen some astonishing things and some appalling things – I know that’s the same as most fringe festivals, but Camden has provided some of my best-remembered theatre experiences over the years.

TB: Your mask work is very unusual – what influenced your style of performance and design?
WT: In March 2008 I was touring Italy in a production of Hamlet. Watching The Simpsons dubbed in Italian, I realised that despite the language barrier, and unlike other Italian television, I could understand it perfectly. Such clarity of gesture and tone, such rich economy of storytelling! This is HunkyPunk’s creation myth: While I watched a hitherto non-existent mask-theatre style, as distinct as any in world-theatre, popped into my head almost fully formed. It was like somebody imagining Opera or Ballet into existence. Whilst this style borrowed—sometimes stole—from other styles (from the Commedia Dell’Arte of course, from Kabuki, etc. – in many ways theatrical equivalents of Cartoon), by including them, transcended them all… It was as if I stood at the dawn of culture, as if I had become the first prehistoric devotee of Thespis, imagining Theatre Itself into existence after too many sneaky swigs on the temple wine. Since then, that wonderful world I envisaged has slipped out of the television for me and into the streets and supermarkets. Even the torment of a trawl round the Tartarus that is Tesco is transformed, by this new comedic lens, into an exultant journey through a fairyland paradise of colour and astonishment. HunkyPunk is an effort to entertainingly articulate that aesthetic vision.

My chief collaborator Rozie Jackson, and I, like to joke that KUNST? is a play about ‘people you won’t like, shouting things you won’t understand’… But we aim, above all, to be accessible. You can tell, can’t you?

TB: How do you create your mask shows?
WT: Usually we start with some visual or technical ideas and we develop them. KUNST? was created almost by a kind of alchemical process. We started with a handful of fairly surreal and frankly pointless sketch ideas. Stuff like ‘Lear’s heath-scene with actors playing Lear, the Thunder, the North-Wind, and Lear’s beard’. At first these didn’t really go beyond my concept drawings, but then we decided to merge this project with another idea that I’d been loosely playing with for years: an ordinary couple in an ordinary sitting-room having an ordinary bicker, but shown through wild exaggerations of their subjective-worlds – a lifetime of mutual loathing is humorously played out in their dark fantasies. Once we had decided that our play would employ this technique to chart a domestic quarrel about an evening’s television, we got to work figuring out how to fit our early sketches into it.

KUNST? performs from the 17th – 21st August, at the Lion and Unicorn Theatre. Book tickets for KUNST? here 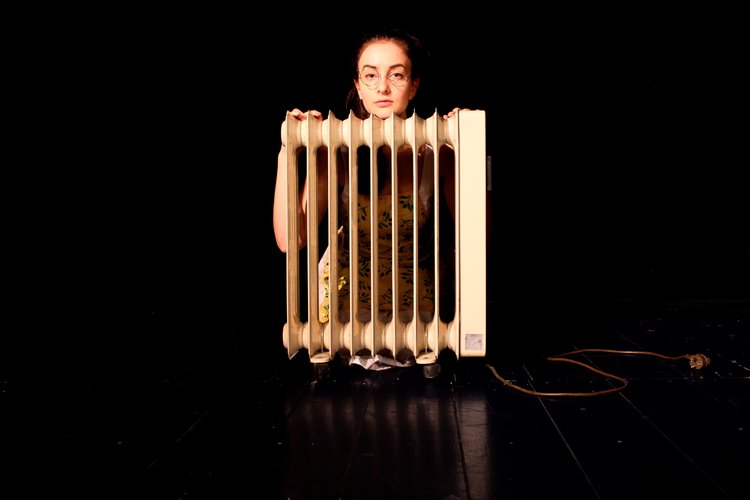 Bezoomny Theatre – an international theatre collective formed of Gaulier graduates – presents RADIATOR, the story of a woman locked in her own world.  Based on a true story of schizophrenia, Radiator is rooted in the absurd, questions the imaginary and explores the curious realm of loneliness, friendship and plumbing. You will never ignore your radiator again.

TB: What inspired you to create RADIATOR?
Bezoomny Theatre: RADIATOR was first created at the theatre and clown school Ecole Philippe Gaulier in France during the ‘writing and directing’ workshop. Philippe made us tell stories to each other. But they couldn’t be boring, they had to be beautiful, and if he thought they could be possible on stage he would accept them. The writer of RADIATOR, Madeleine Bye, told the story of how a woman, who suffered with schizophrenia, had a two hour conversation with her radiator. What we loved about the original story was how it was told in a playful way. A lot of people have preconceived ideas about schizophrenia. The beauty of this story was that the woman who told it wasn’t afraid to tell it. She wanted people to laugh with her, not at her and although its a terrifying experience, why can’t we bring out a sense of normality from it and therefore create a person through the story who is just like everybody else? The show really concentrates on this idea and has subsequently shifted to become a story based on this real life experience but is primarily focused on friendship, loneliness and… plumbing.

TB: The company met at Gaulier – how did your time at this school inform and influence your creative practice?
BT: So much of the show is influenced and inspired by what we learned at Ecole Philippe Gaulier. The teaching is thoroughly grounded in the principle of ‘Le Jeu’ or ‘the game’. The process of the show involved breaking down the story into these games to essentially become a serious story told in a light and playful way. There are actually two scripts for RADIATOR. One with the voice of the Radiator and one without. Our time performing and creating the script was massively influenced by Philippe himself. In the final play you can only hear the one voice, when the actor is playing and their spirit is alive, the audience are able to enter the game of deciding whether this dialogue does or doesn’t exist.

RADIATOR performs from the 2nd to the 6th of August, at the Tristan Bates Theatre. Buy tickets here.