Review of: Of Nymphs and Men

Devised theatre can often become laborious or resort to stereotype and preconception, but Of Nymphs and Men is a powerful piece that shows a huge amount of preparation and construction. To see a form of daring and intriguing theatre not often accomplished onstage is certainly a refreshing experience.

Of Nymphs and Men sees two characters, ‘dreamers’ impose upon each other in a forest cabin – a simple premise for a fantastic show.

Devised by Dirty Rascals and performed by Grace Cheatle (Alex) and Adam Woolley (Andrew), the 45 minute show sees the two actors occupy half the stage each, weaving a chronology and story through successive and alternating accounts. Dirty Rascals succeeds here with a masterful idea of trying to construct a cogent narrative while also subverting that same narrative – creating two believable and flawed characters while showing how the story they were telling is entirely subjective. Often, as the story continues, ideas and details are recited by one figure, only to be warped or distorted by successive accounts told by different characters. 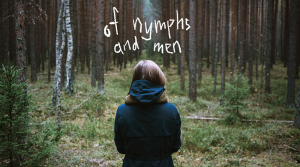 This takes poise and skill to accomplish, and fundamentally an unflinching confidence in performance and character. Cheatle and Woolley had to consistently rely on one another in making a story, while also having to create a distinct an
tagonism between the two characters. This was done marvellous – they created an immersive and powerful setting with efficiency, while always leaving excitement and intrigue.

Woolley’s Andy is perhaps the more nuanced of the characters (at least in the improvised version seen on the opening night, each performance varies in tone and dialogue according to the description), embellishing his character with repeated words and phrases that reflect key personal traits – he quickly quantifies his relationship with Alex in a dysfunctional sibling-esque fashion. His need to do so is subtly telling and enthralling – so much about these characters is created through inference or physicality; all slowly teased out over the course of the 45 minutes.

Cheatle and Woolley seem to be playing some sort of theatrical card game, slowly revealing their hands with each new account and driving the story on with each revelation. Only Andy’s abrupt shouts of frustration risk shattering the illusion, but this is a fleeting gripe in a fantastic performance.

Devised theatre can often become laborious or resort to stereotype and preconception, but Of Nymphs and Men is a powerful piece that shows a huge amount of preparation and construction. To see a form of daring and intriguing theatre not often accomplished onstage is certainly a refreshing experience.