Review of: The One Day of the Year

The One Day of The Year is part of the Finborough Theatre’s The Great War 100 series, a group of plays based around the Great War that the Finborough Theatre are presenting between 2014 to 2018 to commemorate the centenary of WW1. Now, as a massive lefty pacifist I was concerned about how I would feel about this season of work. Seas of poppies make me a tad nervous, celebration of war even more so, but this is perhaps why I am just exactly the sort of person who ought to see Alan Seymour’s wonderful play, based around the Australian celebration of Anzac day. 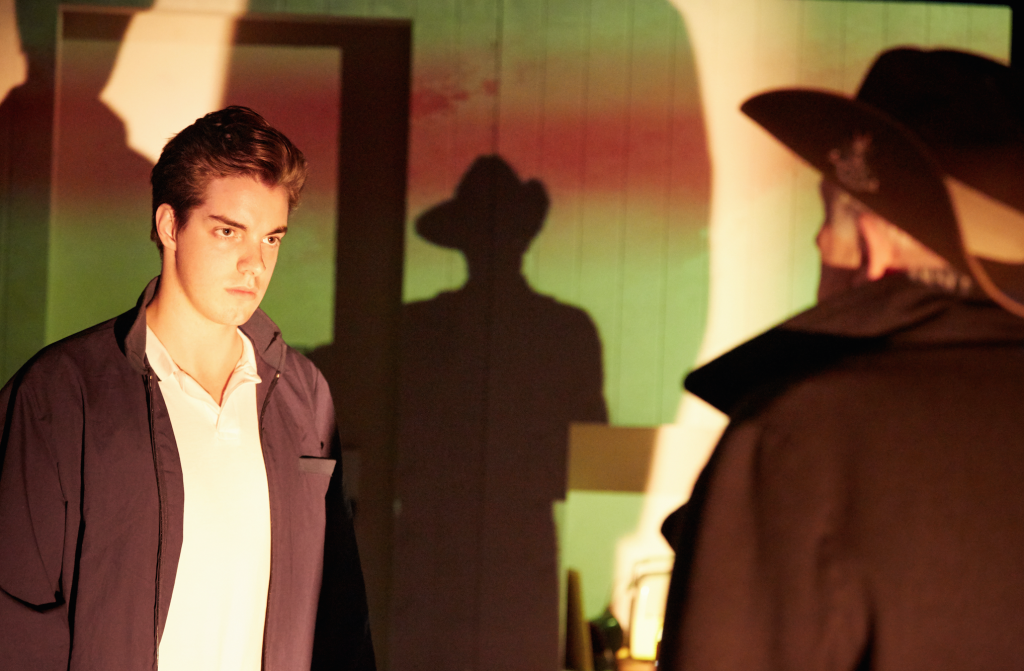 The first thing to note is that this play, charting a son’s stand (James William Wright as Hughie) against his nationalist father Alf, does not feel like it was written 55 years ago, it is a real testament to the writing that it’s conversations about immigration, national pride and class feel as fresh and relevant today as they would have done in the 1960s. The statements about national identity and the migrants coming to Australia and “bringing espresso”, ring with the uncomfortable tinge of so many UKIP supporters, so many beer swilling Nigel Farage speeches, so many “Britain for the British” tirades, a slightly terrifying glance at how little we’ve moved forward in over a half a century.

The production is beautiful and slick. The sound, lighting and music are fluid and seamless and  the set design is clever and functional, continually used in inventive ways that fully immerse you in the Cooke’s household. The hot tea even steams, boiling from the tea cosied pot. This attention to detail is felt throughout the play and allows the actors and audience to be fully involved in the monotonous, claustrophobic world in which the play is set.

The performances are genuinely brilliant, endearing and genuine with the real star turn being from Fiona Press as Dot Cooke, the long suffering wife and mother, who performs in a beautifully understated manner, all tea making, tongue biting and wise words. Mark Little plays Alf with some brilliant physical comedy, and Wacka (Paul Haley) is heart breaking as the gentle and loveable veteran, determined to not be defined by the war and depression he has trudged on through. The real skill of this production is the open and frank manner it discusses the concepts of class and gentrification. What happens to the people living so whole heartedly in the past? What happens to a generation determined not to honour it’s history? The piece is played with such emotional depth that I felt genuinely moved by these people from different generations and backgrounds struggling to understand and respect each other.

This play left me wracking my brains for an answer as to which group of people I felt most attached to, the proud older generation clinging desperately to a sense of pride for a time gone by, or the younger generation wanting to learn and grow and move forward but often speaking from a place of no knowledge of the actual events and horror that previous generations have suffered bravely through. The story of the play discusses how the horror of war has disintegrated into one massive booze up, but as a generation that has one massive booze up in honour of basically nothing everything Friday, I did feel for Alf and Wacka wanting just “One Day” to feel important. The overriding message of the play is that life is a “battle”, Alf saying that “Some people fight all their lives, they never win, but they had a go”. I actually felt that this play shone brightest for having been staged in the shadow of the recent election, every heart felt view and boozy tirade could have been heard on any leaders debate or drunken political pub chat over the past few months. It felt relevant and multifaceted and is really brought to life by this wonderful ensemble.  I didn’t think I’d like a season of work based around war, but as I learnt along with the younger characters in the play, Jan and Hughie, what the flaming Nora do I know about it, anyway? Do go see.

Defibrillator in association with Ironbark and Neil McPherson.

Lover and maker of theatre.Founder of Whistlestop Theatre Company, director and creator of things.