Meticulously directed, Torben Betts shows himself to have a keen observant eye

Slavoj Zizek quotes somewhere in his book Living in the End Times, that everyone loves a revolution- or pushes for one- as long as it is not in their backyard. Although described by a friend of mine as a kid philosopher, I was thinking of this when watching Torben Betts’ Muswell Hill, jointly directed by Two Sheds’ Roger Mortimer and Deborah Edgington. The play previously had a run at the White Bear last year and keeps some of the same casting with its transfer to the Park Theatre- not far from Muswell Hill itself of course. 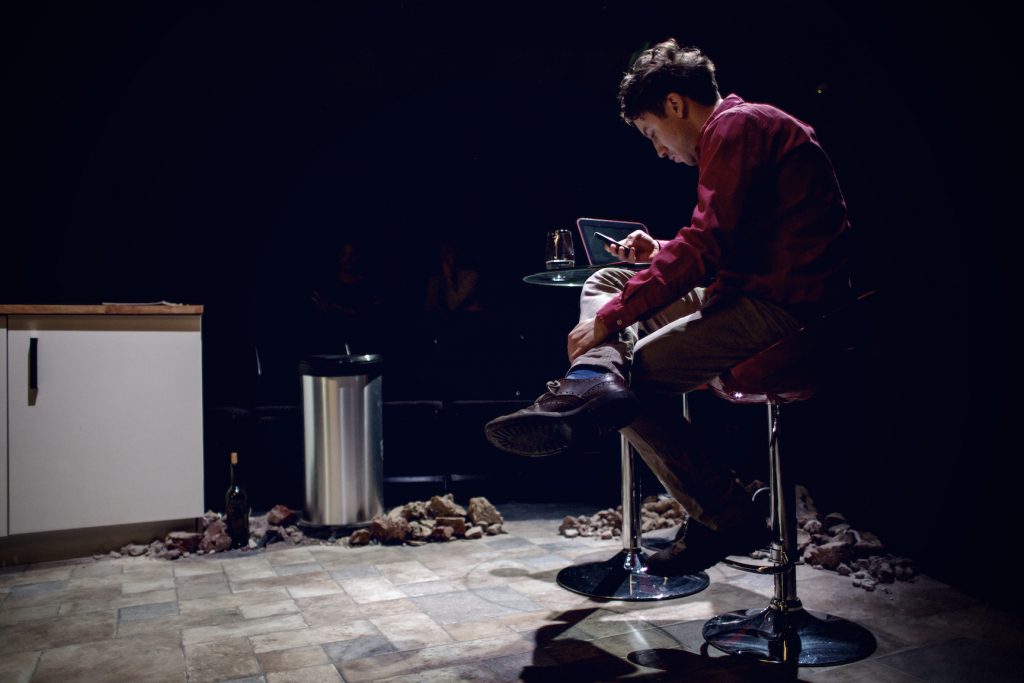 The play is a domestic comedy, naturalistic in tone, although Nancy Surman’s set design is the opposite of that, littering the stage with the remnants of the 2010 Haiti earthquake, when the play is set. We are at a dinner party held by tense and wired accountant Jess and her would be writer and potential lay about husband Mat. All the action takes place in the kitchen (if this had been Ibsen, it would have been from beside the fireplace, or if Chekhov, there would be several designated scene changes, so the choice of kitchen is interesting, it’s a sort of inverted fireplace, or is the kitchen of Stringberg’s Miss Julie, where we see what really goes on, as if the kitchen has become the confessional box, the place for asides to take place). Before the invited guests descend on the internet reliant apartment from hell where no one can keep their fingers off their mobile for long or resist checking their emails every half minute and where you must know your technical patois, Mat drops a bombshell that remains a potential threatening undercurrent running under the play’s main concerns. And as the guests bring their existing psychic energies and emotional baggage (Karen, a cancer nurse and mourning widow, Jess’ adopted sister Annie, abused as a child and a recovering alcoholic in love with in-his-60s theatre director Tony) we seem set for an Alan Ayckbourn like experience or a Mike Leigh play.

But as was noted in Theatre Bubble’s own interview with director Roger Mortimer, Muswell Hill is no Abigail’s Party, the distinction here is that Torben Betts’ target is middle class values. The main thrust of the play, aside from the almost central part played by modern day Trofimov would- be- teacher Simon, is the idea that the characters pay slight passing lip service and express small tokens of concern over the natural disaster that killed a quarter of a million people 4468 miles away and indeed express impatience with each other over their own individual problems. We fast realise we are in a world full of cruelty and harshness, where the characters are not very bright nor particularly conscious. The only two that potentially are, Karen and Simon, are almost victims of a non understanding world and suffer FOBLO (fear of being left out) a rehash of FOMO ( fear of missing out) and thus are considered mad, even by the audience.

Despite needing a global disaster to offer parallel insights to the domestic one unfolding before our own eyes, the play is very enjoyable to watch; Torben Betts shows himself to have a keen observant eye and both halves, separated by a 15 minute interval, fly by thanks to some brilliant character acting by all. Ralph Aiken particularly excels as Simon and shows great range, and Charlotte Pyke as Karen certainly has some of the quirky winsomeness of some of Mike Leigh’s greatest characters, even if it were not meant. And everyone could easily have stepped out of a film by Joanna Hogg, also a great chronicler of middle class values (in particular Archipelago or Unrelated) and certainly, direction by Roger Mortimer and Deborah Edgington is as meticulous and as witty.

But I couldn’t help wishing that the characters were less driven by the writer’s ideas. I also couldn’t help thinking that you don’t have to be middle class in order to have a dinner party from hell, or deal with people that are ignorant or selfish or who don’t show enough concern for a humanitarian disaster happening elsewhere, although in this instance, it certainly helps. What we have here is a social constructivist play (a niche that the Park seems to be carving out for itself) that can’t let go of its own imposed ideas about the world, which inhibits the drama and its potential to be a cracking bit of theatre- it does exemplify some of the more negative aspects of London’s current theatre trend. Undoubtedly Torben Betts is a talented writer, undoubtedly Muswell Hill is a good production. But it does spoon feed a little. With more development and the characters driving the work, this play could be fantastic.