As Muswell Hill by Torben Betts (Invincible, What Falls Apart, The Unconquered) opens this week at the Park Theatre, we ask co- director Roger Mortimer, who directs with Deborah Edgington, to explain why Muswell Hill, why Torben Betts and why now……

You’re a writer/director whose work has previously been described as  surrealist and psychological  (Trauma for example) so what drew you to directing Muswell Hill by Torben Betts, which on the face of it, seems very different from other things you’ve done with your theatre company Two Sheds?

‎It’s true, Muswell Hill is a lot more political than a piece like Trauma (though I have written more political work than that since then). But what I love about Muswell Hill is that Torben isn’t inventing some kind of dystopia to give middle class theatregoers a frisson of danger – he’s showing us that it already exists around the edges of our safe and comfortable world, and that the majority of the world’s population live in it. I came to the play when someone recommended it as the best play he’d read in 15 years, and I must admit my first reaction to it, though very strong, wasn’t entirely positive. Here, after all, was a writer who seemed to be saying that writing was a self-indulgent waste of time, and I suppose as a writer I felt attacked. Torben has since told me that his own character is a combination of Mat (the wannabe writer in the play) and Simon (the socially awkward political firebrand), which gives the scene where the one completely eviscerates the other an added resonance – maybe it’s all very psychological after all!

You first directed Muswell Hill at the White Bear last year and the play was subsequently dubbed, by some critics at least, to be ‘the most horrendous social gathering since (Mike) Leigh’s Abigail’s Party’. How far do you agree and do you think that Muswell Hill is part of that particular cannon of suburban situation comedy?

I should start by saying that I co-directed it with Deborah Edgington, whose contribution to the process has been invaluable. As for the Abigail’s Party ‎comparison, I’ve always been a bit concerned that Leigh was simply laughing at working class taste (poor Demis Roussos) or at least what he imagined it to be. Torben’s target is not middle class taste but values, the routine expression of sympathy over a tragedy half way around the world which becomes a kind of narcissistic self-absorption. There’s a wonderful scene where two characters react to the news of the Haiti earthquake with a kind of auction – which one cares the more, which one has the latest death toll from his or her Smartphone – before returning immediately to their own first world problems. 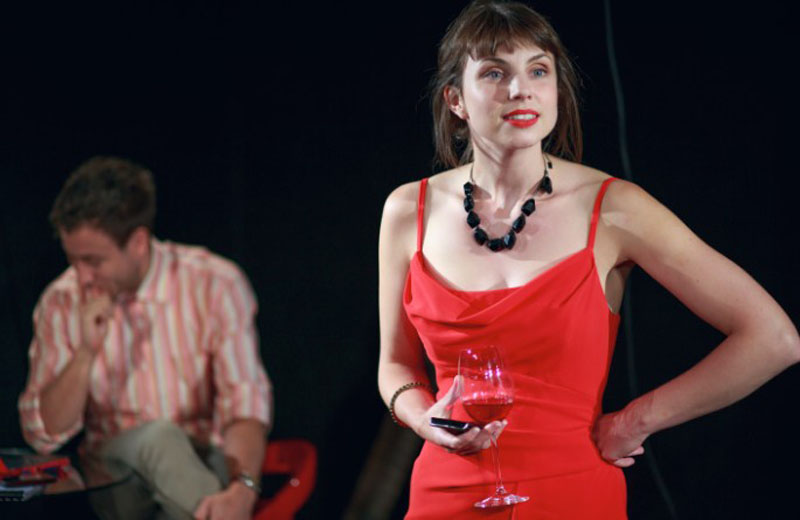 Without going into too much detail, how do you think the play has grown and developed this time around? Has Torben Betts worked on it at all further to the White Bear performances, are there further insights the cast or yourself have discovered?

We have two new actors this time around, though I should stress‎ that this isn’t because we were unhappy with the original ones, they simply weren’t available. We’re also doing it in the round, which means we can have a larger audience without anyone being too far from the stage. I think that’s very important with a play like this, to be right there in the action with the characters, to share in their embarrassment when the wrong thing has been said.

I hope mine and Deborah’s understanding of the play has deepened‎ as we’ve become more familiar with it, and of course the new actors, both of whom are remarkably intuitive, bring their own insights. At first I had to fight my instinct to say “No, that’s not how X used to do it…”, because of course that isn’t the point. Their performances are quite different from the people they replaced, but that keeps it fresh and alive, particularly for the four actors still with us from the White Bear cast.

How much input does Torben Betts have in the rehearsal process, or did have in 2014? There’s been a bit of discussion recently about whether the writer is the best interpreter of his or her work and whether they should be part of the rehearsal process. As a director, what are your thoughts? For example, Sarah Kane found it useful as, along with the creatives and actors, she could find new poetical meanings and refine her visual language.

Torben came to the last‎ night of the White Bear run, and has been very generous (but respectful!) to us with his advice. Neither Deborah nor I saw the original production at the Orange Tree, so we genuinely had no idea how our production differed from that. Torben has also always made himself available to the actors in case they had any questions about their characters. This time around he dropped in at the end of the rehearsal process, and we were very happy that he was so positive about what we’d done with it, especially how it had developed since the White Bear.

Carrying on from this, where do you personally stand as a writer? Do you prefer to hand your work over to whoever is directing or do you like being more collaborative?

I don’t think I would want to direct anything of mine‎ – you have to hand it over and let someone else find something new in it! This being the case, I think I probably shouldn’t be in the rehearsal room at all.

Getting a bit more into the detail of Torben Betts’ writing and why it attracts you, could you talk a little bit more about his style, or about the play in terms of its structure and themes/ images and what you think it is trying to achieve and how his writing and the play challenges and develops your own journey as a director?

Torben’s style is incredibly economical – Martin Amis once described Jorge Luis Borges as “prose so cold it burns one’s lips”‎, and I think that’s very true of Torben’s writing. There’s not a single word wasted or without dramatic intention, even in what seems like an implausibly long conversation about whether a character puts lemon juice in her thousand island dressing. He also has a way of saying in a phrase what many writers would take a scene to say.

As for structure, it’s noticeable that in a play about a dinner party going horribly wrong, each scene in the first act introduces a new character, as if they’re totally incompatible ingredients being added to the same dish. In the second act they’re all mixed up, with disastrous (though far from predictable) results.

I would say Torben’s main theme‎ is the way we all dwell on our first world concerns while paying lip service to people with real problems, and one of the brilliant things our designer Nancy Surman has done is to bring the Haitian earthquake on stage, surrounding the characters, though they never refer to it except as something happening to other people unimaginably far away.

Why Muswell Hill now? And why at the Park? Will the audience demographic be different?

I think the Park is a superb new ‎theatre, or rather an incredibly welcoming community space with two theatres attached. It’s also of course very close to Muswell Hill, which I think will help encourage an audience. Much to my surprise the Ham and High came and reviewed it at the White Bear (in Kennington) which I think speaks volumes about the play’s interest to a north London audience! As for why this play now, I doubt there will ever be a time when it isn’t relevant, sadly.

Tell our readers why they should come and see Muswell Hill!

The quality of the writing ‎is at a level you very rarely encounter in the theatre these days, or indeed at any time. The play is extremely funny but in a dark, disturbing way, and will stay with you for some time after you’ve seen it. Quite a change from writers who think they’re being “edgy” because their characters take drugs and swear a lot.

We also have six incredibly talented actors – it’s part of Two Sheds’ mandate ‎to provide a platform for relatively unknown artists to showcase their talent, and this group has talent in spades, as do my fellow creatives Deborah Edgington, Nancy Surman and young lighting designer Jack Weir.

What’s Next? For yourself and your theatre company Two Sheds?

In April/May we’re bringing Athol Fugard’s “My Children! My Africa!”‎ to the Tristan Bates, and we’re just in discussions about a possible venue for Reza de Wet’s “African Gothic” this autumn.

Muswell Hill  is currently in previews and runs at the Park Theatre until 14th March.

Roger Mortimer studied with Marina Carr and Tim Crouch at the Lir Academy, part of Trinity College Dublin, and at the Arvon Foundation with Simon Stephens and David Eldridge. He has written several plays, which have won several competitions and been performed as far afield as Pittsburgh and Poland. He also studied directing with Tony Clark at East 15 and Tom King at the Royal Central School of Speech and Drama, and directed his own first play, Why Don’t You Just Sing Jazz?, on the last night of the Grimeborn Festival of Alternative Opera at the Arcola Theatre in 2009 to great acclaim.

He is the founder and Artistic Director of Two Sheds Theatre Company.