Review of: Jack and the Beanstalk

Not the theatre as we know but this recorded pantomime has all the festive fun.

Driven by the creative team behind CheekyMonkey productions, Iain Lauchlan and Wll…. have once again pulled off a successful pantomime season for the Belgrade Theatre Coventry.

The show is cleverly introduced from the fore stage of the Belgrade; stage bare, seats up and lights dimmed with a couple of forlorn actors sitting dangling their legs into the pit bemoaning the loss of this family tradition – the Christmas show, Jack and the Beanstalk. Slowly the idea dawns on them that as there is still an eager audience out there, so perhaps they should try tdeliver their high quality fun loving show by other means. 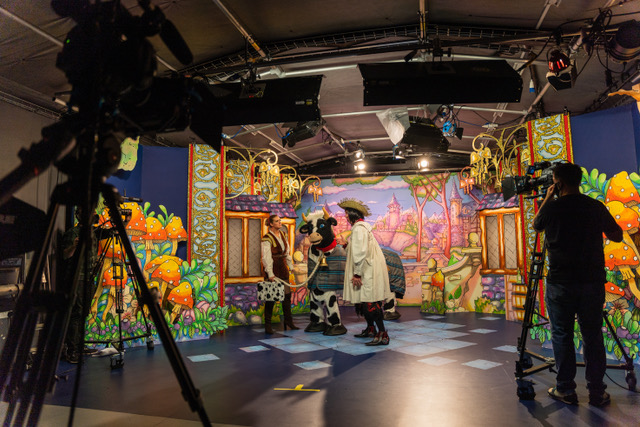 With a techy exchanges of ideas about apps and digital effects they stroll off up stage wondering – will it work – and so they disappear into the empty wings. Yes, it does is the answer! It works with all of the bells and whistles you would hope to see in pantoland. Quick as a flash they appear on the TV set ready and raring to go.

All the favourite characters are here, Dames and silly helpers heroic youths and cheery villagers. With spirited performances form all the Jack and the Beanstalk from the Belgrade theatre Coventry is a great advert for festive fun. Yes it’s different but no less entertaining, Ian Lauchlan as Dame Trott doesn’t put a foot or a boot wrong with deft delivery of one liners that come straight down the lens.  And what a Dame, with his range of outrageous costumes, accesorised with bulbous hats, bags and even bagpipes that never fail to amuse. Of course his side kick In Craig Hollingsworth as the dim Simon Trot allows for quick fired repartee and physical comedy that always aims to please rather then to hurt. Sanity is is in the shape of the sensible jack Trott played with verve and good nature by Morna MacPherson. These three push the action along and are ably helped out Trish Adudu and a range of of ensemble players all of whom have fully signed up for the fun

Extravagant costumes, glittering sets, forlorn and put upon characters and robust young heroes all serve to bring the essence of pantomime alive through the screen – it is a real achievement. The comedy and fun is all there and wry jokes and silly business that families love and I am sure it will pick a different kind of audience, albeit a digital kind but they won’t be short changed as all the fun of panto is here.

Where of courses the Belgrade pantomime  would finish its run this digital production can be seen long after closing night. What a treat for audiences near ad far.