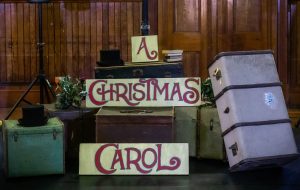 Tell us about Open Bar Theatre and also how you came about and how the name came about.

OBT: Open Bar is the younger sister of the first company we ran together which was called Open Book Theatre. Since 2013 we’ve run a company which takes classic novels, to perform in libraries.

Five years ago, we started working with Fullers Inns who have essentially acted as Executive Producers for our work.

When we were first discussing performing Shakespeare in their pub gardens the name came quite naturally. And all of our performers do get a free drink at the end of every show. We just wrote that into the contracts in the second year.

How long have you guys been together where do you come from?

OBT: We met a few years ago and immediately clicked and very quicky began we’re talking about the story of Dracula. And we just found we worked together so naturally, and so Dracula ended up being our first show.

It was our only, profit share production in the end. We then managed to secure funding for every year beyond that. And we’ve since been able to offer paid work to everyone who was in that first show which feels really nice.

Tell us about some of the productions that you worked on, which has been your favourite.

OBT: Gosh, we’ve done, we’ve done so many productions now, I couldn’t even count them. But we’ve done many different Shakespeare plays. 12th Night, Comedy of Errors. Much Ado About Nothing, Midsummer Night’s Dream, Romeo and Juliet, Merry Wives. The Tempest. And then outside of Shakespeare we’ve done Christmas Carol, Alice in Wonderland, Treasure Island. Oh, and Jungle Book. It’s hard to pick favourites every time we do a new show, we learned something we’ve developed our style and we’ve always had fun with it.  And we’ve made sure to operate on quite small costs, which enables us to pay everybody properly. That involves a lot of multi-roleing, for example in Comedy of Errors we have an actress playing four characters that all spoke to each other. We’ve also had characters played by hatstands.

You have pretty high production levels for a company that performs in pubs, you certainly don’t put on a typical pub theatre production. Talk to us about why it was important to incorporate full scale production values in that way?

And especially performing in pub gardens as we often do, when you’re working with a slightly drunk rowdy audience, or a young audience, you need to grab their attention, and Shakespeare isn’t always the easiest kind of play to do that with – so we have to work for it.

But you absolutely don’t have to have studied Shakespeare to find it funny. The idea of Shakespeare can be intimidating, but we tried to make it as accessible as possible by making sure everyone has something that they can enjoy – and for that reason, we take a lot of time looking at the visual nature of the set, and the costume. We think a lot about how we present two characters who are played by the same person, so that it’s really clear who the audience is watching.

People think they’re going to struggle with the language of it, but we make it so accessible. And part of that comes from understanding the comedy of it.

The timing has to be specific, and it has to be right every night – because each audience deserves to see the best show that you can put on.

Although performing outside – sometimes the elements are against you, in the summer the guys did shows in storms and wind and using aerial silks in that environment is obviously a challenge.!

So – partly because of the setting, do you think that you’re bringing the classics to an audience who might not normally go to see Shakespeare at the theatre?

Yes!   I think what we love the most is the type of person – more often than not it’s men who have been cajoled into seeing Shakespeare with the lure of beer – it’s wonderful to see them turn around.

My mother-in-law’s partner, who is in his 70s – he loves pubs, and he had never seen Shakespeare. He never thought he would understand it. He is one of the most self-deprecating men I’ve ever met. But he loved it, and now he comes every year. And in a pub quiz he knows the answer Malvolio.

And we perform with that demographic and person in mind, because if you can entertain that person, the person who doesn’t think they’re going to get it, then everyone will have a good time.

Although now we have so many returnees, we’ve created a little gang of Shakespeare aficionados! They look forward to it every year – the gratitude that we put on a show this year was immense. In the summer when we performed the Tempest, it was fully socially distanced and outside and everyone was so so careful. And we found that some people really haven’t been out until they came to see the show. But that, because the health and safety around the show, both from our side and Fullers was so stringent, I think people felt safe. People felt a sense of normality and sort of used it as their step back out into the wider world which was really beautiful

You’ve been working with Fullers for five years? Can you talk a little bit about your partnership, and the relative uniqueness of that?

We had a chance meeting, it was a lucky moment, they wanted to put money into the arts in order to encourage more people into their pubs, we had the exact type of production they were looking for, ready to go. But I certainly very much feel like we would never have got that lucky moment, if we haven’t worked our guts out for years prior to that, performing theatre in unconventional spaces

And with the very first event, two weeks before we opened, we’d sold our first few shows. And I think we forget what a luxury that is, that with the support of Fullers, night after night we get the opportunity to play up to 250 people crammed into a pub garden (obviously this is pre-2020!).

The circumstances have given us this amazing captive audience. 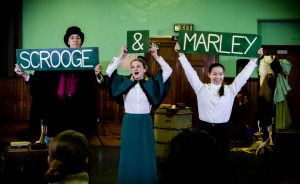 Your latest production is a ChristMESS Carol – and this not the first time you’ve performed that play, but it’s your first digital production is that right?

Yes, we have a live tour of A Christmas Carol, all set up, ready to go, we’ve actually done it in pubs, for the last three years. And it’s always, incredibly festive and we’ve always found it really exciting.

When the second lockdown happened, we did look at whether we’d be able to perform in December, but all the staff at Fuller’s were going back on to furlough, and the pubs were closing all the way through November, and so there was no way of selling tickets to make it work. Plus, the rules around pubs and only going with members of your household and the need for substantial meals whilst different for theatres, were just too tricky to negotiate.

And so, we decided to take the show online, which has meant a total readjustment of what it is. We want it to still be interactive. We want it to have an “Open Bar” kind of style. And so, we cast Vicki as Charles Dickens. We have a narrator in Charles Dickens, who will tell us the story but also wrangle audience members on zoom and bring them into the story, they’ll play all sorts of different parts in the show and interact with Scrooge, and some of the other characters. And there’s an extent to which we don’t really know what’s going to happen.

We don’t know how crazy it’s going to get, and so we decided to cover ourselves by calling it A ChristMESS Carol. Essentially giving us an excuse from the start that because we still wanted that audience interaction type of performance, it’s going to be chaos. But organized chaos – which is kind of our thing.

We are pretty faithful to the Dickens story, we tell the tale as it was written, we just make it funny, and silly – and Dickens as a character in the play is the bridge between the story, and the modern age. He brings all the audience members into our world, whether it be that you’re a passive listener, and you’re just being addressed directly down the camera, or you’re gung-ho and you want to join in. He’s the gatekeeper between the audience and the story.

In terms of the narrative to make this work, we present Dickens who has opened his beautiful copy of A Christmas Carol, and these characters have jumped out of it. Dickens is reading the book and he has a very, very high opinion of himself – he’s delighted that his story is the most famous Christmas story outside of the nativity. There are several versions of it on in the West End and he is very proud that everyone is watching his work. And he’s, pretty chuffed that in this version, he’s telling it himself.

Tell us a little bit about the audience interaction.

What’s nice about the audience interaction is that you can always choose the level of interaction you want. So, if someone feels that audience interaction that’s absolutely terrifying, their level of audience interaction can be quite passive. But if you’re someone who really enjoys the sort of interactive nature, we give audience members the chance to play characters with lines, so we’ll be sending lines to people. There’re characters that will sing, that will dance – so it’s very much like, choose your own adventure.  And to keep it all together, Vicki who plays Dickins, is a very seasoned audience-wrangler which is why it was vital that she was cast in a central role! 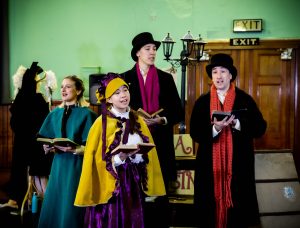 And what’s next for Open Bar?

We’ll be working on our Spring show! And Fuller’s have already told us they want to work with us to make that happen, which is lovely.

Once it gets slightly less freezing, we can go back outside, and we can do open-air theatre. And we think we know which Shakespeare we’re going to be doing this year – but we can’t tell you that, it’s top secret, but we know it will happen. If we managed a Summer tour in 2020, 2021 ain’t going to be a problem. And maybe, since you got us reminiscing about Dracula maybe we can recreate that for Halloween.

A ChristMESS CAROL is streamed live 10th-22nd  December. Tickets are available from https://www.designmynight.com/london/whats-on/christmas-themed/a-christmess-carol