Producer Ameena Hamid turned her attention from stage to audio during lockdown, here she tells us all about Tales from the Tombstone Tavern and what the world looks like from where she’s standing at the moment 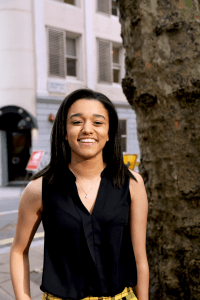 Tell us a little bit about Tales from the Tombstone Tavern

Tales from the Tombstone Tavern is a love letter to horror and Halloween inspired by the dark stormy summer night in 1816 when Mary and Percy Shelley, Lord Byron and more told each other scary stories. Except in the case of our podcast it’s a pub in South London rather than a Swiss villa, and instead of the heavyweights of 19th century literature, it’s the classic monsters fighting for the title of best horror story. 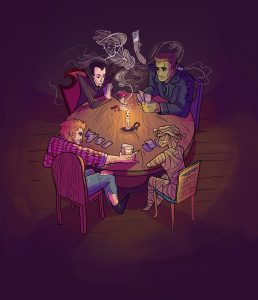 What inspired the project?

Honestly Delmar and I LOVE Halloween (even though I’m a huge scardy cat) and I was complaining about the lack of a Halloween this year. As we’d worked together on Right Ho, Jeeves, a comedy podcast play based on Wodehouse’s work of the same name, it seemed natural to start discussing a Halloween podcast inspired by the tradition we all love of telling stories round the campfire except in this case we wanted to play on the history of horror; it’s characters, tropes and authors. After a five hour phone call and a subsequent two hour pub naming call we walked into The Tombstone Tavern and found Dracula, Frankenstein, Wolfman, The Mummy and the Wailing Woman raring to tell us a story. 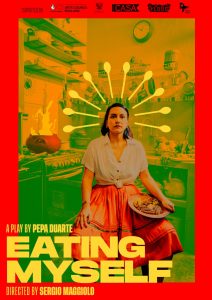 What were you working on before the pandemic?

Before the pandemic I was preparing for a summer off as soon as Eating Myself, my last spring/summer 2020 show, played at the BAC at the end of March. Unfortunately, theatres closed, Eating Myself didn’t find its audience and my hopes of travelling for the summer were lost. But I’ve managed to make the most of moving online and social distancing with audio plays, the online graduate festival and some brilliant Q&As.

How have you found making audio plays by comparison to making stage plays?

There’s some extra freedom in where audio can take you and they allow your imagination to run further than the confines of a stage. Having said that though there are a lot of similarities and I do spend some of my time wondering if these audio pieces could be realised on stage. Most significantly, good writing/acting/directing/sound design is good writing/acting/directing/sound design whether on stage or in your headphones and in that respect they’re a lot more similar than we give them credit for. The magic of audio in these times is that we recorded the episodes in London, Sydney and LA but all our characters are sat round one table, you’d be hard pressed to find that on stage without some very expensive plane rides. 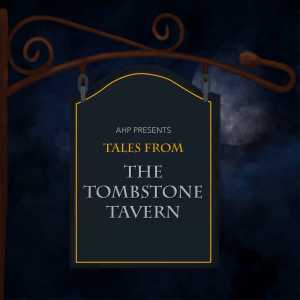 What advice would you give to other theatre makers thinking of making a podcast?

Know why it’s a podcast. I think there are so many online formats springing up it’s important that your know why you are making it an audio play. Give people a reason to listen! Also do your research and give yourself time to get onto the platforms, I dove headfirst with Jeeves so when it came to Tales from the Tombstone Tavern I knew what I needed ahead of release one, I highly recommend figuring that out ahead of time. 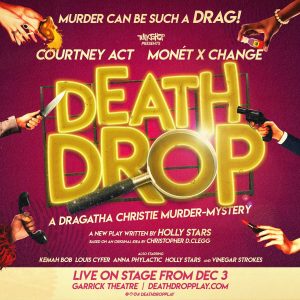 What is next for you and Ameena Hamid Productions?


What a fun question! We are actually making some live work in the next couple of months including bringing Eating Myself to The Golden Goose and making our West End debut as the Associate Producer on TuckShop’s Death Drop. I’m particularly excited about Death Drop as it means I’m the youngest female producer on the West End and joint youngest overall at 20 years old. But this is by no means it for us! AHP has some big plans for 2021 onwards and we’ll no doubt return to your headphones.

And what do you hope for in a post-COVID theatre world?

A diversity of voices. It’s great to see people coming up and tackling the post-COVID theatre challenge head on and I remain hopeful for what that will mean for a diversity of voices behind and on the stage.
Tales from the Tombstone Tavern is free to download on most podcast platforms, including but not limited to Apple Podcasts, Spotify, Google Podcasts, Deezer, Pocketcast and many more. For a full list and links please go to: https://www.ameenahamidproductions.co.uk/tales-of-the-tombstone-tavern