Creation Theatre has dug deep in these Covid times to combat the present lack of creative expression that we are all missing. Creation Theatre have been imaginative with their storytelling and innovative with their delivery. Their new approach to Zoom-theatre is clever and absorbing, just like their live performances. Creation have taken their well-honed skills and delivered them straight into our living rooms in a fun and inclusive manner – well done Creation for reaching out to those of us craving a bit theatrical fun and flair. 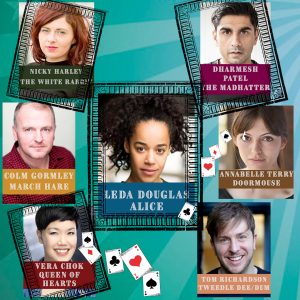 With terrific imaginative designs; Ryan Dawson Laight’s glaring red tones, billowing sleeves, dainty hat and snake like tattoo for the Queen totally impress, big time. Even every day shirts had a unique designers touch and a worthy hat for the Mad Hatter was rather perfect.

Along with snappy direction from Zoe Seaton and collaborative work with guest writers and illusionists this Creation Theatre piece punched above its weight. Characters generally overcame the hurdles of electronic performances and conveyed this madcap story with imagination. The creative team really had worked some digital magic. The passing of cards from one screen shot to another, the clever use of the mirror reflecting characters or the chequerboard ceiling and the tiny doors for Alice all captured the sense of wonderment and stimulated our imaginations which Creation Theatre seem to be able to do with some ease – given the problems the rest of us are having with this medium!

Here there was no dropping of characters, no one was locked out the room, mics were not mute and visuals were used to good effect. In fact given it is a computer camera, Creation Theatre used it as if they were broadcasting from a drama studio, with close ups, mid shots, eyelines all used to good effect. The gallery audience all looked hooked and participated in this good-natured story telling with great ease.

It is to their credit Creation Theatre managed to get the audience to participate as we are so used to being passive observers of computer screens but with robust and lively performances form the likes of the Cook or the Teweedles the energy was infectious. I am sure Creation Theatre company are even more lively and engaging in the flesh but given where we are at the moment in the arts, their attempt at bringing theatre to your sofa worked remarkably well for a first time effort.

Alice, with a neat pinafore and loose tie portrayed a delightful sense of confusion and interest as played by Leda Douglas and with such a malleable face she really makes the character transcend the digital barrier. As do Tweedle Dee and Tweedle Dum, imaginatively played by Tom Richardson with verve and energy.

Log on and get involved with this bunch of creatives and you won’t be disappointed and if you have a little one sitting by your side they too will be wrapped up in the generous delivery of this inventive theatre company which pulls us into their story telling with great flair and imagination.

Alice, A Virtual Theme Park is available to view at: www.creationtheatre.co.uk