Review of: The Paper Dolls

This charming adaptation of a well-loved Julia Donaldson/Rebecca Cobb picture book sees the characters come to life as adorable puppets.

Julia Donaldson’s charming book the Paper Dolls, which I have never managed to get through without crying, is brought wonderfully to life in this co-production between the Little Angel Theatre and Polka Theatre. Rebecca Cobb illustrates the picture book and Lyndie Wright’s fabulous puppets take direct inspiration from them, so that young audiences recognise the puppet of the girl Rosie as though she had just jumped out the pages of the book. 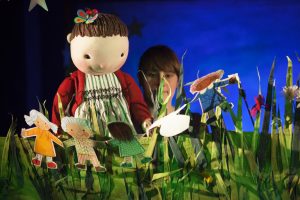 Rosie and her paper dolls at the Little Angel Theatre

The show is performed by two dextrous and captivating puppeteers. Andrea Sadler as the, at times exasperated, kind mother and Jane Crawshaw as Rosie. They also animate all the other characters and objects in the show, including a dinosaur, a red bus, a butterfly hair slide and of course the paper dolls. We watch the dolls get cut out in front of us in a moment of awe-inspiring magic before they are switched to sturdier “ones I made earlier”, which look exactly as they do in the book. The dolls then embark on a journey in the little girl’s imagination, which is somewhat marred by an annoying brother who eventually snips the dolls so that they have to go and live in the little girl’s memory.

It is not the snipping that produces the tears – on stage it is actually quite a fun moment for being so subversive – it is the kind granny that is found in the little girl’s memory along with the hair slide and the tiger slippers. It is also watching the little girl grow up (a series of cardboard cut outs) and becoming a mother herself and helping her own daughter to make paper dolls. We cry at the passage of time and the delicacy of childhood memory – or at least I do and several other grown ups around me in the audience.

My young critics loved the moments where the paper dolls danced off the stage and into the audience and were particularly tickled when Rosie has a kicking tantrum about her brother stealing one of her toy pigs. The brother is Peter Glanville’s invention, (he adapted the book and directs the show). There isn’t a brother in the book and although the children all recognised how annoying a sibling can be, there is something much darker about a brother snipping the sister’s dolls, rather than just “a boy” as it is in the book. It slightly jarred that this dysfunctional boy had the same loving mother as Rosie. Also one of the great things in the book is that the girl plays with dinosaurs and tigers as well as dolls, and this is reduced somewhat by claiming that the dinosaur actually belonged to her brother. That, for me, was the only niggle in an otherwise enjoyable show.

Adapted and directed by Peter Glanville