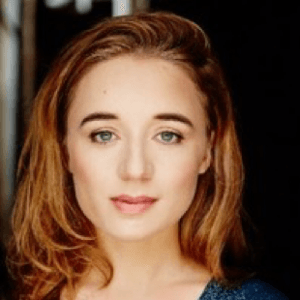 1. What is Killing It about?

The simple tagline is that it’s about the pressure to make grief useful. More broadly, it’s about being hit by the worst thing — losing someone, not knowing what’s happened, and having to resign yourself to their death — and not being able to compute it. It’s about living in that weird, liminal space. These three women have each taken their grief and are using it as immediate fuel. One’s got a business, a new relationship and a Youtube channel, one’s got a stand up comedy show, one’s got a political assassination plan. So it’s about being sad, being busy, and presenting that sadness in a palatable, consumable way, only to have a deep, absurd grief burst through the cracks.

2. What inspired you to write it?

Lots of things. I’d recently moved countries and was contemplating a life and significant relationship I’d left behind. Disturbingly, it seemed that everyone around me was equally miserable. The political climate was dire and relentless and it seemed like everyone was moving in an aggrieved, liminal fog. So I knew I wanted to write about different types of grief overlapping. I also became interested in people disappearing and in unconfirmed deaths at sea. Then, as I was writing and developing the play, a close friend died suddenly. It was horrendous. The timing was also utterly surreal. There’s nothing of that experience explicitly in the script, but I’m sure it had an impact on what the play turned out to be.

3. How has the piece been developed into a full production?

We had an initial short R&D supported by Wilton’s Music Hall with the additional support of the John Thaw Initiative. Lily McLeish and Janet Henfrey have both been involved since the very early days of the script. I’ve re-written a fair amount since Wilton’s, and developing the script with the support of this larger team has been absolutely amazing. 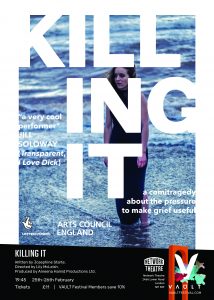 4. What are the benefits and pitfalls of performing your own work?

It’s great because I know my characters intimately, so I can start a bit further ahead in the process as an actor. It’s also great because I have so much agency in the stories I get to tell. It’s hard because you have to make a lot more happen for yourself, at least initially, and there are lots of barriers to that. And even once projects get going, you can be a bit more thinly spread — it can be really tiring. When I act in things I haven’t written it feels quite luxurious to be able to just take the text that’s given to me and work with what’s there. I think there’s also probably more room for self-doubt with actor-performers because you’re responsible for the whole world, not just your own journey within a larger thing. For all that, I’m massively grateful that I get to write and perform my own work. I love both so much.

5. Why are you bringing the show to the Vault Festival this year?

I’ve performed at VAULT before (in the The Talk by Neela Doležalová), I’ve seen a lot of shows at VAULT, and it’s a fantastic festival for new work. The programming is ambitious, diverse and so much more alive than the traditional theatre scene often gets to be. We knew we wanted to be part of it if we possibly could.

6. What is the plan for the future of the production?

We’d like to do a longer run. We’re on for 2 nights at VAULT which is a great showcase, but considering the massive amounts of work everyone’s doing — the design is stunning, the actors are stunning — we are extremely keen to take the show elsewhere! Everyone’s pouring so much into this, not least Janet who is performing such a mad and demanding leading role in her mid eighties — it would be criminal if more people didn’t get to see the frankly incredible feat she’s pulling off.

7. How would you describe the Killing It in three words to a prospective audience member?

Killing It is at the Network Theatre, Vault Festival on the 25 – 26 February 2020 – more info and tickets here