FLIGHTS. A quality production all round - entertaining and better value than a round of drinks!

Flights is a quality production from One Duck presently taking off at Omnibus Theatre, Clapham and you should definitely grab a ticket.

Writer, John O’Donovan explores what it is to be mates, to be a lad hankering after the past of times yet reaching for the newest of times where responsibility and aspiration sit uneasily upon the shoulders of our young Irishmen. 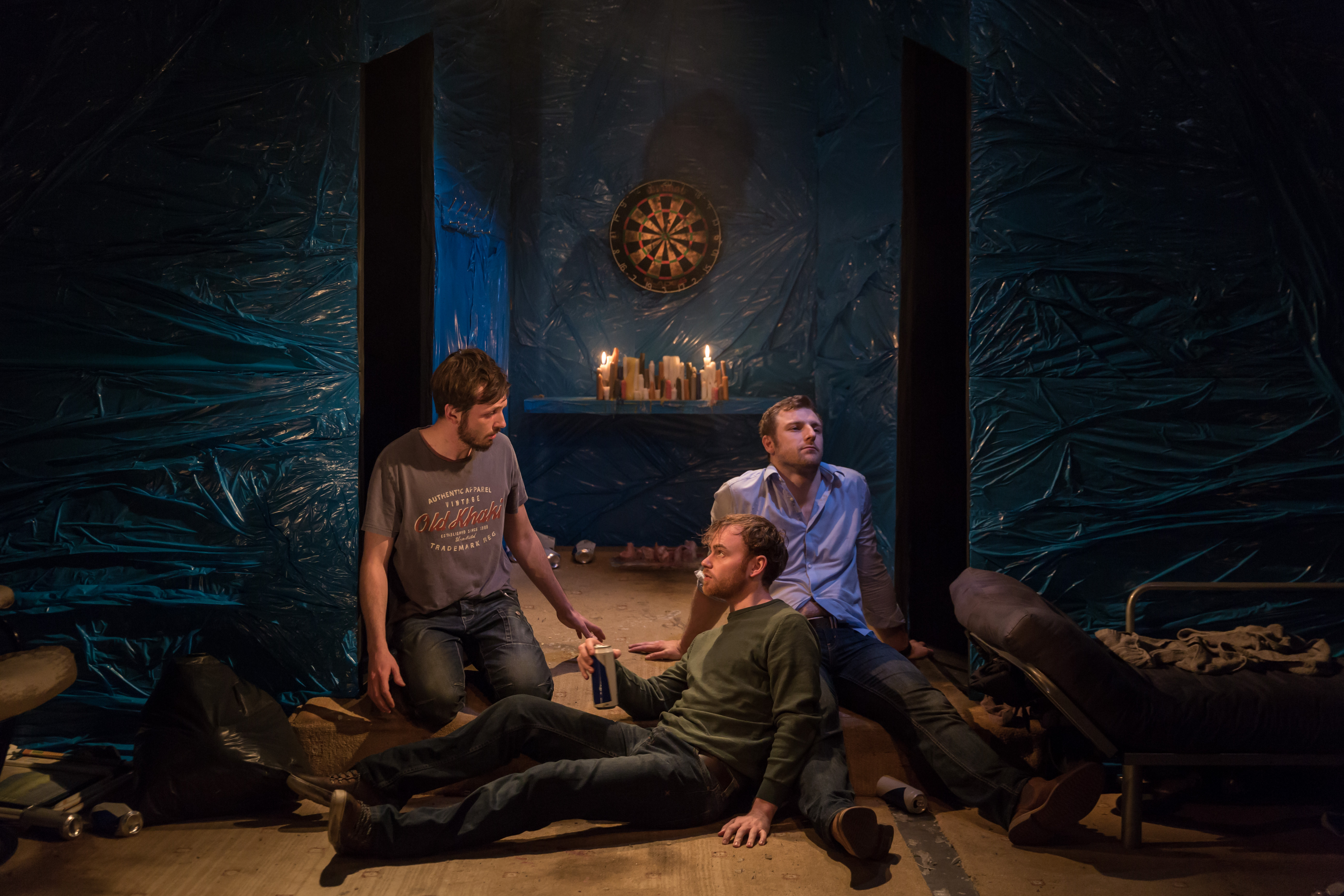 The cast are impressive and do great justice to O’Donovan’s witty and tender script as they bring to life a set of characters that reflect the flight of the young from Ireland’s shores often to return washed up and disappointed. To fly the nest is hard but sometimes the next town will do just nicely, especially if the drugs are easy, or maybe you can just find ecstasy at home with your mates.

O’Donovan’s has written a play for our times. He examines the tensions of young men (and to a certain extent women) against rural Ireland where education ‘too much riding and not enough revising’ and a speedy financial boom and bust fly past many leaving them to the mercies of easily available drugs, low paid jobs and memories of a time where lust, love and friendship was all you needed. This celtic tiger roared for sure but and it can leave you ‘shaking like a heart’.

Direction by Thomas Martin was delightfully light and controlled. Martin creates familiar scenes of friendship and fall-outs with a subtle touch, never allowing them to degenerate into an annoying lads night out. Credit must also go to Sue Mythen for movement as the physical engagement of characters wass compelling, particularly in their monologues. Equally, the soundscape composed by Peter Power was wonderfully atmospheric and used to a great but subtle effect and Martin’s overall direction suitably rises to meet the demands of this fine script. The cast deliver performances with wit and sensitivity as they embrace their fading youth and long-term friendships when they come together to remember their friend, Liam, deceased some 17 years previous. Alcohol and drugs fuel the reunion and memories are revisited, retold, reframed and even retracted.

Flights is a powerful piece that calls into question what we remember and why. It wonders if things past are still things present, as it considers how we say one thing but feel another or act in one way and then do the opposite. Time is a dimension where you delete the old and make way for the new but as progress takes off moments merge (particularly with the help of drugs) and what seems constant becomes transient and what seems like the new is but the old in disguise.

Colin Campbell as Barry sensitively navigates the seeker of love with a twinkle. If, as kitchen worker, his endearing notion ‘a hundred ways to hand a girl a knife’ is shaken he still yearns for something other than just the lads even when cheated upon and yet that is where he finds solace as well as discomfort -conflicted times. So it is with Connor Madden’s commanding playing of the conflicted Cusack; married to the boss’s daughter, happy to be a new father and happy to be out on the lash away from ‘ the weight of it all’ only to discovers that home time is the place he wants to be, where crawling spewing babies tell you that love is present.

The last of the friendship trio is Pa played by the excellent Rhys Dunlop who drives the play forward with a range of contradictory emotions of love and frustration – often lost and found often within the same sentence. It seems as if nothing or no one is stable, everything is in flux and things are not what they seem – even memories. So when you take off for a night out to make new memories you come to land with a bump only to realise ‘ new road-old stars’. All the characters deliver captivating monologues that not only reveal something of the present but of the absent too – the deceased Liam – clever stuff from O’Donovan as moments of time fuse and reshape our narrative.

Flights is a thought provoking and entertaining play not be missed. O’Donovan has shaped a drama of real complexity that allows us to laugh, to pity and to hope. His writing is poetic, yet real and its imagery is powerful.