Review of: The Glass Will Shatter

Joe Marsh explores the government's Prevent policy and the impact on both teachers and pupils alike.

Under the artistic direction of Marie McCarthy, Omnibus Theatre at Clapham Common, goes from strength to strength, not only with its newly reorganised front of house that helps create three remodelled performance spaces but also with an eclectic performance programme. The range of performances allows for Sunday music of the highest quality (as was demonstrated by the stunning evening of Bach and poetry with the distinguished violinist Krysia Osostowicz) but also with the weekly presentations (to an ever-growing audience) of a range of new provocative, contemporary and innovative writings. 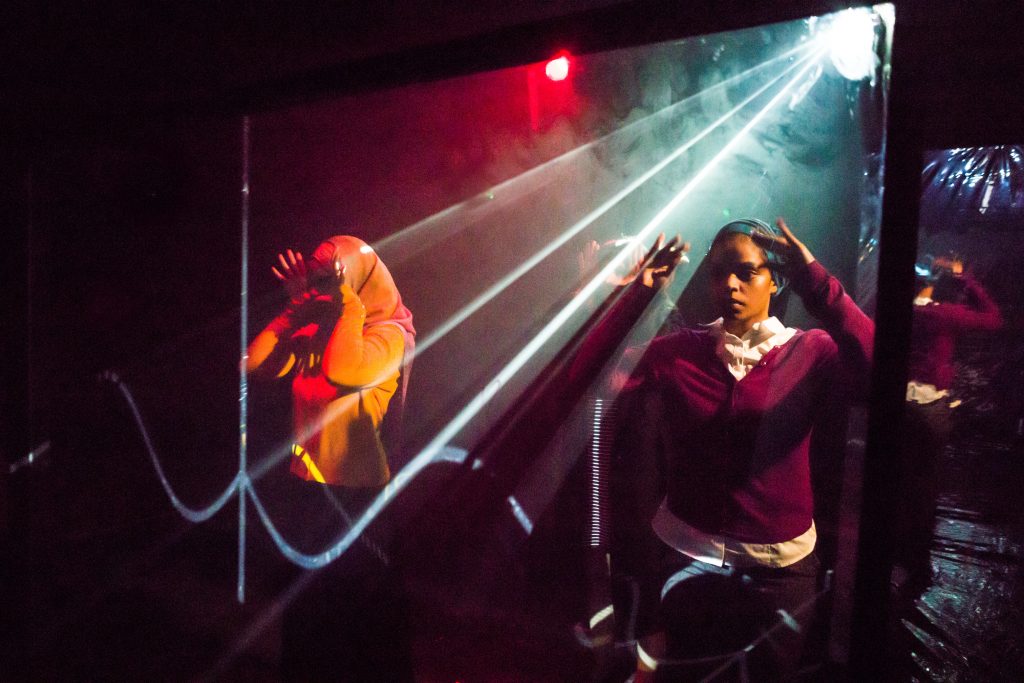 The Glass Will Shatter is the most recent offering in the Omnibus season presented by Althea Theatre, a company intent on exploring contemporary social issues. Currently, the government’s response to combat student radicalisation is to demand close scrutiny of students’ words and actions by teachers to help identify possible terrorists. The Derbyshire based teacher and writer Joe Marsh, explores the consequences of the current ‘Prevent’ policy.

The simple design by Will Monks helped create powerful images to suggest the moral, philosophical and cultural disconnect between teacher and pupil as well as the internal emotional struggles that each player experiences in the educational system. A moveable glass panel acts as a barrier, suggesting that because you can see a person, hearing them and reaching them is a challenge.

Teachers, Rebecca and Jamilha (played by Josephine Arden and Alma Eno) are required to assess the risk of a challenging pupil, Amina (played with suitably confrontational attitudes by Naima Swaleh) increasingly exhibits verbal and physical behaviours that should alert any teacher to worry about her well-being. Each teacher takes a different perspective on the pupil with the more senior having empathy with the girl’s cultural background and so equivocates, whereas our young idealistic teacher “does her job’ and reports what she considers suspicious behaviours. The cultural motivation for these approaches are examined by Marsh as he considers the notion that difficult pupils may be not well served by white middleclass teachers who have little empathy for a particular ethnic community. Alternatively, not taking action may itself be short sighted with behaviours and beliefs ignored or excused for the sake cultural bias. Either way government policy of embedding British Values and identifying vulnerable children subject to potential radicalization is fraught with difficulties and requires teachers to receive full support and training in order to distinguish the bold from the radical. They need a clear understanding of the difference between youthful outbursts and subversive behaviours that could be detrimental to the well being of society at large.

Marsh presents this narrative (often visually) and covers a wide range of issues – cultural barriers, racism and sectarianism – against an educational backdrop. We observe much of the action and the clinical direction of Lilac Yosiphon forces us to consider, rather than feel with scenes often lacking an emotional depth at times. They quickly move from one critical issue to another, conflating several ideas of love, loss, behaviour and belief all to quickly. Nevertheless it is a play of interest not just because of the focus on the government Prevent policy, but also because of the ever-increasing challenges of teachers that suggests their job is impossible to carry out effectively as it moves incrementally away from talk and chalk to watch and report.

The Glass Will Shatter is on at Omnibus Theatre from 21 Jan – 8 Feb.
Tickets available from: www.omnibus-clapham.org