Sound Cistem starts off with a simple enough question – “How do you look?” The play isn’t asking audience members to check their appearance, but to reflect on how they see the world around them. Challenging stereotypes, prejudices and gender constructions along the way, Plaster Cast Theatre explores the cisgender gaze on the transgender and non-binary body in this mesmerising piece. 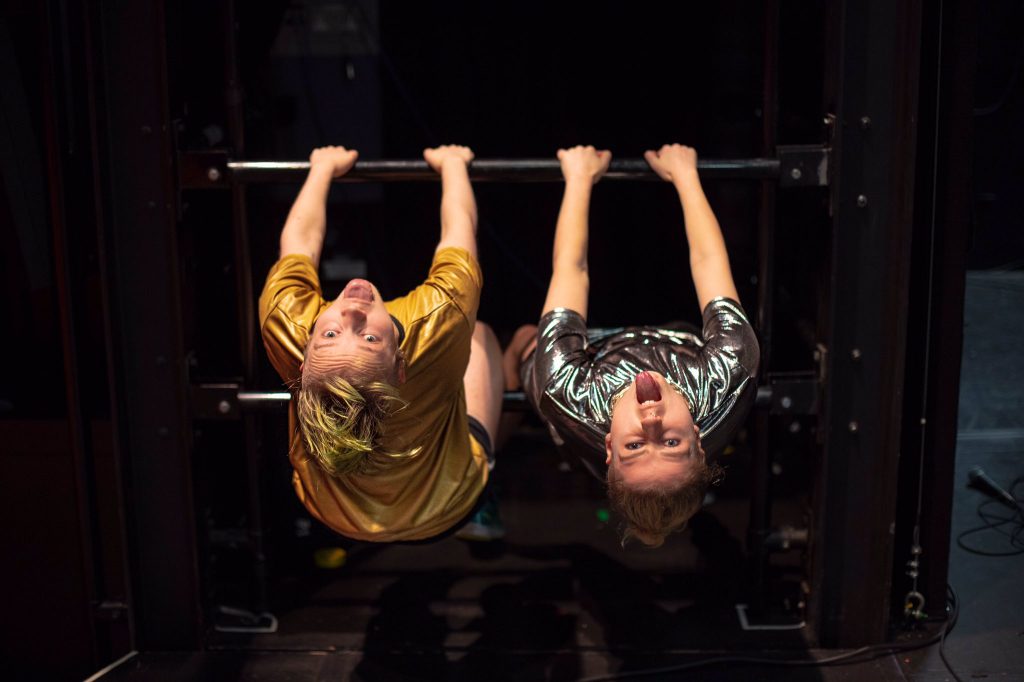 For the next hour they perform a routine that is full throttle, funny and empowering, their body movements adding emphasis and flair to the running background dialogue – recorded interviews with young trans and non-binary people. The interviewees’ words are projected onto the backdrop as they talk about their bodies, how they are perceived by others and the challenges of rejecting gender conformity.

They discuss the pressure to perform gender – swagger for masculinity, swing your hips for femininity – and the way bodies can be as much of a prison as a liberation. They talk about their worst experiences as a trans or non-binary person, the probing questions and questioning stares, and how they would like to be treated instead. One interviewee sums it up, “If gender didn’t exist I would probably be the same just a lot less depressed.”

The piece dwells on the power of dance to bring people together and allow individuals to fully express themselves, but at the same time acknowledging the judgement and prejudices often inherent in dance spaces like nightclubs – gender segregated bathrooms and drunk people asking for a lighter before asking you to explain your identity.

The interviews also portray a diverse range of voices, with trans people of colour and disabled trans individuals exploring how racism and disablism intersect with the trans experience.

The dancing fluctuates between tightly controlled aerobic-like routines and riotous unmediated movement. It all builds to a disco rave crescendo complete with holographic tops and chaotic lights, while the audio distorts, echoes and repeats in the background.

The dancing isn’t flawless or exact, but it doesn’t pretend to be either. Brouwers and Morris fill the stage with their breathless movement and ecstatic facial expressions – it’s hard not to be brought along for the ride when watching them in full flow.

It’s a deceptively simple concept, just dance moves and disembodied words, but Sound Cistem is full of depth and complexity. It explores the diversity of transgender and non-binary existence in a way that is humanising, eye-opening and, despite some dark moments, ultimately joyful.

Sound Cistem runs until 22nd January every night at 7pm. It was commissioned by HOME Manchester as part of its fourth annual Push Festival, a celebration of the North West’s creative talent. You can book your tickets from www.homemcr.org.