Review of: The Duchess of Malfi

Produced by:
The Almeida Theatre

Blood and gore aplenty. This is a brilliantly staged and superbly acted new interpretation of Webster's classic play which deserves to win awards for many if those involved. Fight to get a ticket.

There will be blood. The Duchess of Malfi is renown as a play with a high body count and director Rebecca Frecknall’s new interpretation at the Almeida is for the Sam Peckinpah generation; heavy on the violence, with blood aplenty.

The Duchess is of Malfi (Lydia Wilson), recently widowed, has found new love. The problem is, her lover Antonio (Khalid Abdalla) is lowly born and not a suitable match. Undeterred she leaves Malfi to secretly marry and has three children. Her two brothers (one her twin) become aware of the hidden family and seek to eradicate the threat to their rule. Their devious plot is born of rage and insanity, with her twin driven by deranged madness and incestuous desire. The agent of their crime is Bosola (Leo BIll), a man frustrated by his desire to serve having generated no reward or recognition. He accepts his mission, but in doing so sets off a chain of events that trigger his own remorse and reap havoc on the family. 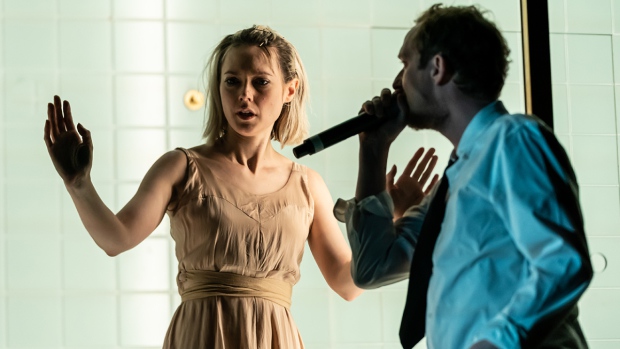 Set designer Chloe Lamford’s tiled room, enclosed by glass, proves effective in providing a focus for the menace, with the malevolent protagonists leaving to sit at desks in the wings. Whether you regard it as a changing room or a cell is not important – it is ultimately an abattoir. The room also presents a perfect backdrop to some exceptional performances. Lydia Wilson has previously impressed at the Almeida in Charles III, but the role of the Duchess gives full rein to her talents; displaying passion, indignation and horror with great power. Her reactions to the horrors inflicted on those she loves could easily have been at the schlock, B-movie Hammer House of Horror level, but she manages to make the events truly chilling. While it is difficult to be sympathetic with a mass murderer, Leo Bill conveys all of the angst and anger that the role requires. His delivery of the necessary comeuppance may be difficult to watch for the squeamish, but we can see the justification of his actions.

Written in 1612, there is the usual need to adjust to the language, but the modern dress and use of some modern weaponry, help the process. The play is at its best when the violence is threatened. Tension and jeopardy are played to maximum effect towards the end of the first act, to leave the audience silently trembling towards a much needed interval stiffener. When the blood finally starts to flow in the second act, it gushes and oozes, but black not red – adding greater significance to the bleak, dark motives. Victims daub themselves in it, with the violence stylised and often played in slow motion for maximum dramatic effect. Is it overdone? Perhaps, but this is a story about the evil that men can do when driven by desire, jealousy and avarice, and should not pull its punches.