Price:
£18 to £25
Reviewed by: Alexander Parsonage

The part panto, part satire and all singing Ubu is a fantastic return to form from Kneehigh.

Part panto, part satire, and all singing, Ubu is a fantastic return to form from Kneehigh that offered a genuinely thrilling night out. There were several things that struck me on entering Shoreditch Town Hall, the atmosphere felt more like a party than a performance – with costume and photo booth, ping pong balls flying for no apparent reason, and various other activities being presided over by the cast, all for an audience who’s average age was early 20’s, about 40 years younger than the average London audience.

The main performance space had a high raised stage for the musicians at one end, a couple of bars at the other end and a circular stage in the centre. The audience were standing around the stage in a pit with three raked banks of decking offering more standing space. There were chairs for those who needed them but this was clearly a show for standing. 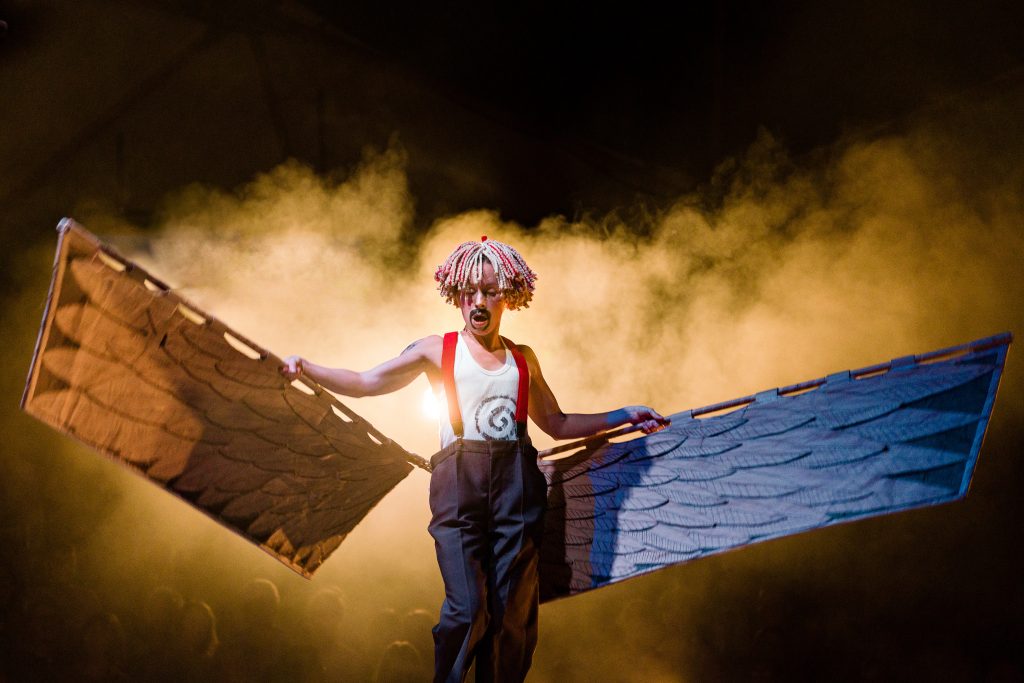 There was no ‘start’ to the show, it just built, the preset playlist segued into a live band, and within three numbers the audience had joined in with the singing. We were then introduced to the concept of the night by our host come narrator, played by Niall Ashdown – under no circumstances were we to turn off our phones, if we wanted to record the show we most definitely should, if we wanted to go to the bar that was great, and if we got restless where we were standing we should move.

This sense of freedom established, we were introduced to the world of the show – a perfect republic ruled by a popular and just President Nick Dallas, played the multi talented actor musician Dom Coyote, basking in the glory of his election win with daughter Bobbi, played by Kyla Goodey, and head of security Captain Shittabrique, played by Robi Luckay. It was hard to tell if the dialogue was just an excuse to introduce songs, or if the songs were a natural extension of the dialogue, but either way it seemed pretty much every exchange between characters led to another rousing singalong ably led by house band ‘The Sweaty Bureaucrats’ – aka Nandi Bhebhe, Alex Lupo, Dom Coyote, Justin Lee Radford and Renell Shaw.

But as in every good panto the peaceful idyll must be upended, and in this case that upending came via the u-bend when Mr and Mrs Ubu emerged from a giant toilet to reek havoc. Katy Owen’s Mr Ubu, an impish military deserter with a mouth of filth, accompanied by Mike Shepherd’s panto dame of a wife, quickly ingratiate themselves with the citizens and in no time at all have taken over the republic.

What ensued might not have stood up particularly well narratively, but it certainly was fun. The regular singalongs continued, smutty double entendres abounded, there was all manner of audience interaction, inflated animals, a mock war waged between the two sides of the audience with ping-pong balls, foam projectiles and giant beach balls hurled from one side of the room to the other. The audience loved it.

I could go into more details about the storyline, but there really would be no point. That was most definitely not what the show was about. It was organised and creative chaos orchestrated and controlled by a talented and energetic cast, which had the audience in its spell right to the very end.

So if you just want to find a show to love this winter – read no further and book your tickets to see Ubu. Genuinely – please do stop reading: Ubu is a fantastic night out that’ll have you smiling all the way home – this really is one of the freshest, most exciting pieces of theatre I’ve seen in the last five years 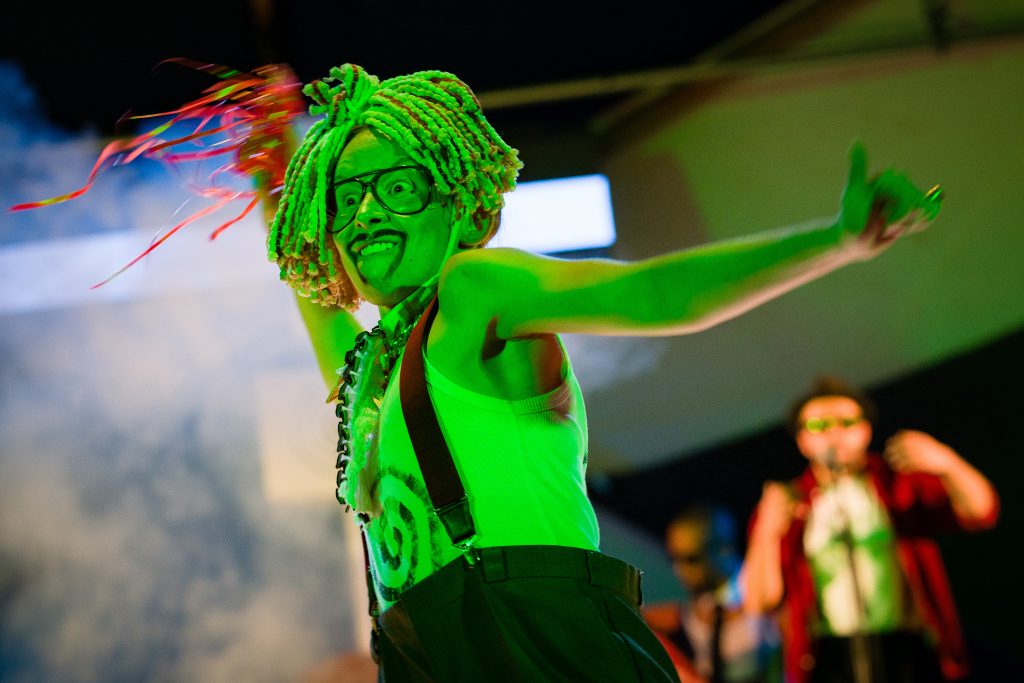 Still reading? Okay, apologies in advance if I sound like the Christmas Grinch. As I say I loved this show, so what follows shouldn’t be taken in any way as a criticism of the show, but rather a wider discussion of the industry as a whole.

About half way through watching Ubu I got a nagging feeling that I wouldn’t have found it anywhere near as thrilling 10 years ago. There were clearly areas that it was deficient in – compared to Kneehigh’s earlier work, it lacked poetry. The beauty of Kneehigh’s work was a marriage of strong narrative and lyrical text combined with comedia inspired playful chaos.

Ubu has chaos and comedia in spade fulls but the lyricism and narrative was lacking. There wasn’t a single character who’s journey I actually cared about. This didn’t stop it being one of the most fun shows I’ve seen in a long time, but it stopped it being a great show. It also meant that the show’s claim to being ‘satire’ was slightly blunted. Satire needs well crafted text and narrative – even if that text isn’t spoken. Maybe it’s just me, but it feels like this sense of having a part missing is now the norm in British theatre.

Perhaps it is only in my mind, but since the cuts really started biting in 2012 it’s hard to think of a small or midscale show that has had it all. I can only speak to the shows I’ve personally seen, but in every case, even the best shows I’ve seen all feel like something has had to be sacrificed: not enough time in the rehearsal room, not enough time developing the script, not the budget for the set they needed, or costumes, or lights or sound or always something.

In this context I suspect had I been writing this review in 2009 I’d have been far more critical. But considering the state of current UK theatre 4/5 feels like the best we can hope for. And the show really was exceptionally fun, even if it wasn’t quite one of Kneehigh’s best shows, it certainly was one of the best shows I’ve seen in the last five years. If you can catch it during this run please do, I suspect it will only get better the more the cast get to play with it.

Kneehigh’s Ubu will be one tour from December 2019: