Review of: The Taming of The Shrew

Produced by:
The Royal Shakespeare Company

A brilliant re-imagination where gender of the key players is switched. A simple device that is refreshing, thought-provoking and highly entertaining. Each role has been carefully thought out and has something new to offer.

Shakespeare with girl power! Doublet and hose, finely tweaked wigs, Elizabethan music and dance – surely standard fare. But hang on – since when was Katherine a man? And for that matter, when did Bianca become Bianco? Director Justin Audibert’s reinterpretation of the Taming of the Shrew, inspired by Naomi Alderman’s book The Power, imagines a world where women are the stronger sex, and by reversing the gender of the roles in the play, is a triumph.

The gender swap takes some adjusting to, but that the cast seemingly also struggle in the early scenes helps the audience, notably finding it difficult to force out some of the subtle adjustments to the names. Once the adjustment is made this adaptation really does work. Many decades of debate surrounding the misogyny of the play are not resolved by the change, but it is certainly refreshing to see the boot (quite literally at times) on the other foot. 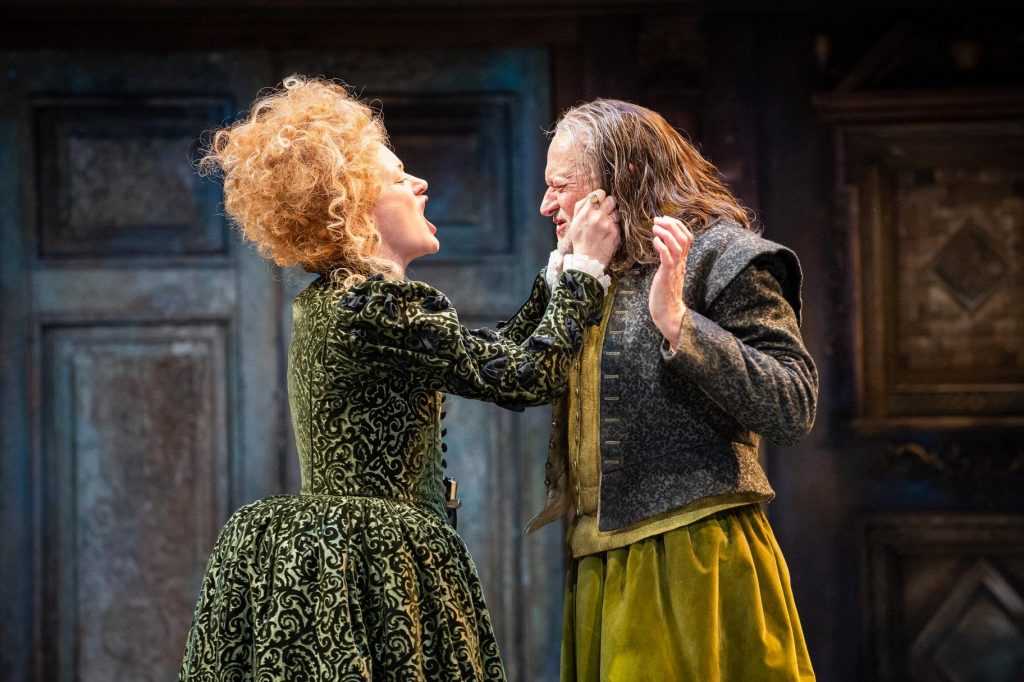 Bianco, a winsome and delicate fellow, is the object of the affections of numerous suitors, all of whom are frustrated by his mother, Baptista Minola’s, refusal to countenance his marriage before the betrothal of his obstinate and argumentative older brother (yes, brother, played by Joseph Arkley) Katherine. Cue the arrival of Petruchia, a woman in search of a fortune and undeterred by the prospect of a feisty man – if he comes with a decent dowry. The ensuing machinations of the various ruses and identity swaps to woo Bianco, and to tame the shrewish Katherine are milked to maximum comic effect. Sophie Stanton as the constantly frustrated older suitor, Gremia, mangles, chews and hams up the dialogue superbly and her gliding around the stage, seemingly on castors below her robes, gets a laugh with every flounce. We are not given a reason for her moving thus, but it is striking that we notice this more than the fact that Biondella is played by Amy Trigg in a wheelchair – also a great testament to Trigg’s comedic performance. Similarly, Richard Clews gives a high camp performance as Petruchia’s manservant Grumio, which stops just short of parody, and his exquisitely expressive signing to a deaf Curtis (Charlotte Arrowsmith) adds some entertaining depth and still greater diversity to the proceedings, while not stinting on the humour.

Claire’s Petruchia is Dandini-esque, but with added malevolence – her subjugation of Katherine is at times nothing short of cruel. Played this way we have greater sympathy for Katherine, and while, when played as a woman, we are led to think of her as strong-willed and argumentative, here we are more conscious of her vulnerability, how little the “he” gets to say in his defence and how total the ultimate taming.

Once again the RSC’s production is sumptuous in its staging, with the songs and dances a great addition when they can be somewhat contrived. The Taming of the Shrew remains a play difficult to justify in terms of the messages, but at least here the gender injustices of five hundred years have been partly redressed.