Review of: My Brilliant Friend Parts I and II

A beautifully portrayed story of love, loss, honour and the struggle for female emancipation in 20th-Century Italy, but with a message that has far wider resonance. Niamh Cusack and Catherine McCormack capture the depth and complexity of Lenu and Lila to delight all avid readers of Elena Ferrante's Neapolitan Novels.

Cramming the contents of four novels covering a period of 60 years into 2 plays is a tough ask. It is even tougher when those novels are one of the biggest publishing sensations of the last few years. The Neapolitan Novels by Elena Ferrante have sold over 10 million copies and avid readers will have a strong idea of how My Brilliant Friend should look. April de Angelis has taken risks in her adaptation, but a combination of sublime acting, superb staging and use of theatricality ensures that her approach works supremely well. 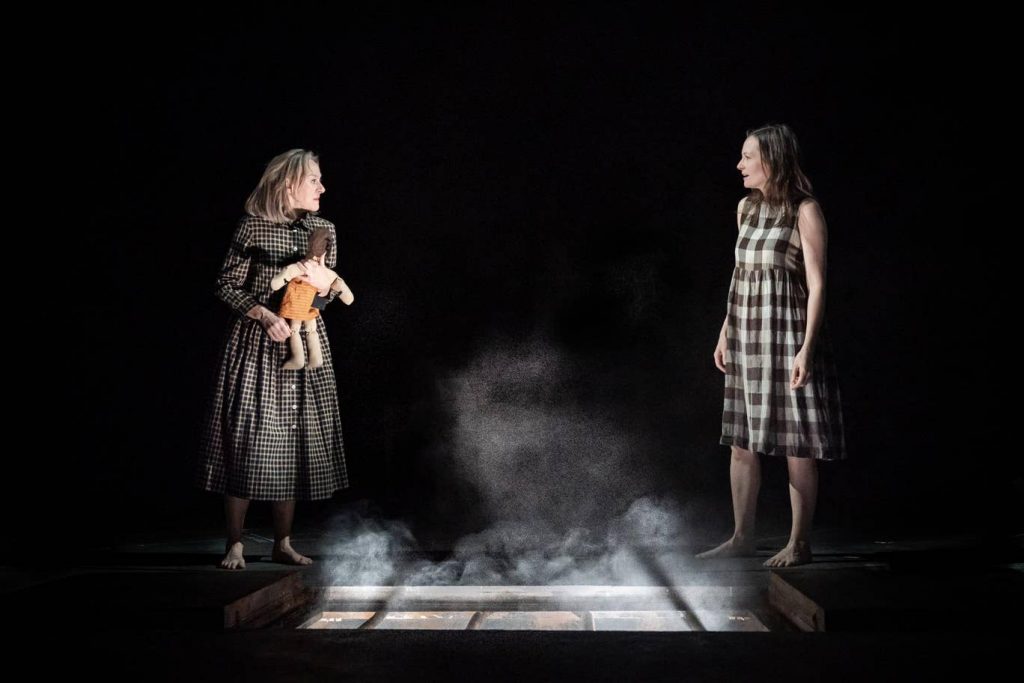 Italy 2011. A middle-aged woman, Lenu (Niamh Cusack) sits intently working at her computer, when her concentration is broken by the arrival of a package containing two dolls. Instantly we are transported to a poor district of Naples in 1953, when the 8-year-old Lenu and her new friend Lila (Catherine McCormack), dangle their precious dolls over a grating that leads to the cellar of the evil Don Achille Caracci. Through their encounters with the notorious Solara and Caracci families, Lenu and Lila form a close yet volatile friendship that takes us through the next 6 decades. Both show promise at school; Lenu is all industry and application, Lila has natural flair and brilliance. Yet it is Lenu who gets the opportunity to progress through school and attend university, while Lila can do little more than critique Lenu’s work. While the story could demonstrate how education leads to female empowerment, what we really discover is that the second half of the twentieth century and beyond saw little progress in the emancipation of women. Lenu may have a writing career, but her role is distinctly subservient to her academic husband and Lila’s attempts to forge her own career are constantly frustrated by the attentions of a misogynistic society.

The first act/book hurtles at a pace that leaves us breathless. Fitting the narrative into a mere 75 minutes is ambitious, when the recent HBO series of the book needed 8 episodes. The issue here is that it is difficult to explore the complex and enigmatic nature of the key characters when the time is taken up with just so much plot. The pace of the play fortunately settles down in the second act and the characterisations really blossom. Taking the time to see both plays in a single day creates the maximum effect and stopping after the first play would negate much of the impact and message of the story. Ferrante regards her four books as a single work, with the 4-book split used for reasons of length (cynics might also suggest a profit motive).

The power of this story is that it goes beyond the struggle for feminism in late 20th century Italy to become a much broader commentary on the lot of womankind across the developed world. It is no accident that the natural accents of the players is emphasised so that we have Irish, Welsh, Geordie, Mancunian, and Scouse representations to name but a few. We are left in no doubt that the travails of Lenu and Lila are those that resonate way beyond Southern Italy. Similarly, while the nature of the family based organised crime that constantly lurks behind the action is very Italian, it could just as easily be the Yakuza or a US/UK syndicate. The sharp suited Caracci brothers have more than a hint of the Krays about them – both homicidal and one a repressed gay psychotic.

The success of this production must to extent be credited to the set and costume design of Soutra Gilmour. The inspired use of high mobile staircases create a perfect tenement backdrop; shifted for the key beach and wedding scenes, while the use of empty costumes, on which episodes of sex and violence are meted, serves to accentuate their shocking nature.

My Brilliant Friend is a compelling tale of friendship, love, honour and loss that highlights the plight of 20th century women. Whether, by the end, that plight has been addressed to any real extent is distinctly doubtful, as is the extent to which any relationship can easily withstand the struggle.

My Brilliant Friend Parts I and II runs at the National Theatre until 22 February 2020. For tickets and more information please visit: www.nationaltheatre.org.uk