With a back drop of the 1980's Thatcher government and the launch of Section 28 Hansard features tremendous performances, an acerbic and very funny script, describing a compelling tale of a couple seemingly at war with each other, but ultimately haunted by their past.

Robin and Diana are a couple under great strain. It is 1988 and Robin is a minister in Mrs. Thatcher’s government, spending his time travelling the country having to defend the Local Government Finance Act and, crucially here, the new Section 28 legislation, that states that a local authority “shall not intentionally promote homosexuality”. Diana meanwhile has to live a lonely and desultory life in their Cotswold home, drinking herself into oblivion. As Robin arrives for the weekend, he is dismayed to see his wife still in her dressing gown and in a highly acerbic mood. Tension that has been building for many years is about to come to the surface. 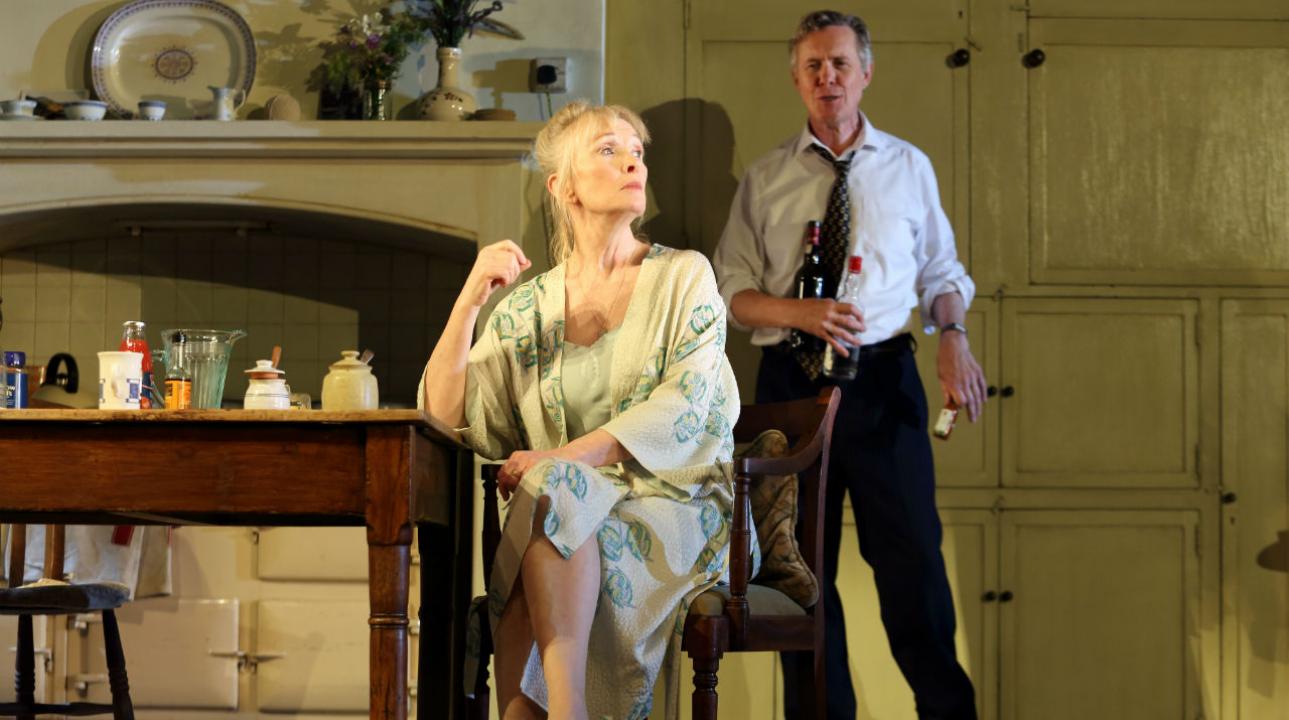 On the face of it a one act two-hander that uncovers the deep issues that have driven a couple, at least emotionally apart, does not seem obviously compelling. There are, however, a number of key factors that really make this production work. The first is the dialogue that crackles with scything wit, sarcasm and plain bitterness. Diana’s ridiculing of the Tory Party of the 1980’s and the mystery of why the nation has an “insatiable desire…to be f***ked by an Old Etonian”, got a knowing laugh and there is much within the couples escalating argument that will resonate with those frustrated with current the current UK political environment- Robin describes how his colleagues cannot believe their luck to have as an opposition politicians who are seemingly unelectable, looking like a bunch of “geography teachers”. The other key element in the success of this play is the performances of Lindsay Duncan and Alex Jennings as the troubled couple. Duncan does not descend into a caricature of a middle-class drunken bored housewife, and manages to instil some lurking tenderness into her verbal demolition of her husband and what he stands for, while Jennings portrays a beautifully observed descent from confident politician into a deeply troubled husband and father.

If there is a flaw to this play it is that it dwells perhaps too long on the verbal battle of wits between Robin and Diana. There is such a lot of potential that it that the author could not resist fully exploring, but it does leave the audience wondering a little too long where it is going. However, when key issue that really haunts the couple is gradually revealed, the truth behind the badinage is painfully obvious. Some might argue that we have come a long way since 1988, particularly in society’s acceptance of homosexuality. However, the exquisitely crafted script and perfectly modulated performances make Hansard both relevant, compelling and ultimately touching.

Hansard is on at the National until 25th November. Ticket availability is limited but it will be screened in some cinemas on 7th November.