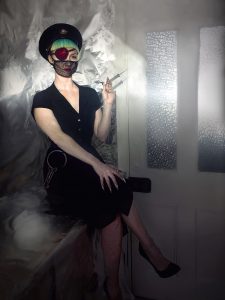 How did the concept of House of Kittens come about?

It happened naturally through a combination of things. First, I started thinking about our opening show Rapture and who those characters might be. I have always had a love of vintage medical utensils & costumes; then we layered our beliefs on feminism, which is that women can choose to be sexual, naked, while still being very much in control and empowered. So, the Amatory Asylum was born!

I would start by saying that our show is not for everyone, and that’s ok.  We are an all-female troop, from diverse backgrounds (financial, geographic, sexual, and racially) and we are all very much involved in the creation of our shows. So, if we feel empowered by it, we are. Personally, I feel that people who object are missing the point and their views often come from their own uncomfortable feelings around sexuality which they are fully entitled to. We very much come from a female led perspective and narrative and we are always striving for women to leave our shows feeling sexy and confident. Team Kitten is 100% in support of the sisterhood. 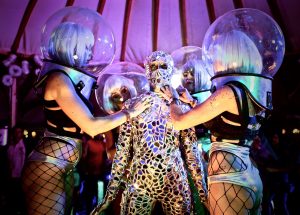 You always manage to find quite stunning locations for your parties, but with quite different aesthetic vibes – do the spaces inform your work, or does the work arrive fully formed, no matter what space it needs to fit into?

Amatory Asylum was pushed forward in a modern direction due to The Wellington being a much more modern space than previous shows, but we can make most things work anywhere.

In the past we had the pleasure of producing our shows at The Kings Head Members Club which was like an Aladdin’s cave of odd furniture, Taxidermy, and antiques. Amatory Asylum was pushed forward in a modern direction due to The Wellington being a much more modern space. Upstairs the walls have been spray painted on directly by Damian Hurst and hanging over the bar is another Hurst piece (a disco ball skull) keeping a watchful eye on the festivities. All these touches have really helped us keep in tune with our institutional theme. But we can make most things work anywhere and are always up for showcasing the venues we partner with in the best possible way.

You’re performing in the show, as well as having created it. How does it feel to perform your own work, and what effect does it have on the performer-director dynamic?

It can be really difficult at times. In my producer role I base my success on financial gains whereas a director and performer it should just be about the merit of your work.  So, it can be tricky separating those mindsets. As a company we are incredibly close which is wonderfully supportive and makes the tricky bits much easier.

Finally – What’s coming up next for you after this?

Sleep and spending some quality time with my partner & dog. We do have a few other things in the pipeline, but I like to keep some surprises back.

Amatory Asylum is the first event to be hosted in the beautiful setting of the newly reopened Wellington Members Club on Jermyn Street – tickets from www.houseofkittens.co.uk