Review of: The Thunder Girls

An overall amusing look at the fickle music industry, as seen through the perspective of a defunct '80s girlband.

At best, The Thunder Girls is an entertaining and honest criticism of the fickle music industry; at worst, it feels like an all-singing, all-dancing episode of Loose Women.

Starring TV’s Beverley Callard, Coleen Nolan, Carol Harrison and West End Star Sandra Marvin, The Thunder Girls is based on Melanie Blake’s debut novel of the same name. A completely new story being brought to the stage for the first time, it premiered at the Lowry on the 24th September 2019.

The play follows the members of a defunct ’80s girlband meeting again twenty-nine years later, and the question of whether they will be able to put aside their differences to perform together once again. 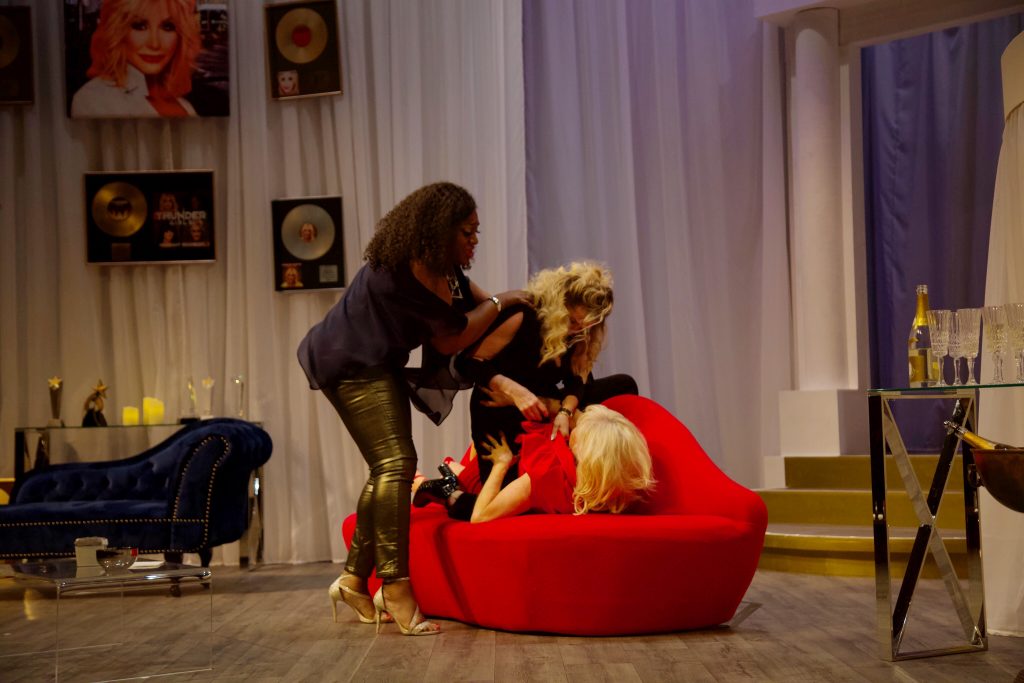 Unsurprisingly, for an adaptation, there is a lot to unpick plot-wise. Collard’s Roxanne is still seething about ex-bandmate Chrissy (Carol Harrison) stealing her boyfriend thirty years ago; the boyfriend, that it turns out, is the father of Roxanne’s adult son. Meanwhile, Chrissy is just trying to cope with her own ex stealing all of her riches. Marvin’s Carly feels her marriage has gone stale, and is disappointed by the fact that she never had children. Just when the three old bandmates are getting a handle on their own issues, assumed-missing Anita – played by Coleen Nolan – turns up, and, believe it or not, she’s now a lesbian.

The characters are well developed, but as The Thunder Girls is heavy on dialogue, there are a few parts in which the obvious exposition feels clunky.

All four actresses feel well suited to their roles, and the old-friends bond between the women is fully believable. Beverley Callard pulls off some impressive drunk acting, but it’s Carol Harrison’s Chrissy that you can’t keep your eyes off, with a hilarious physical performance and great comic timing.

The Thunder Girls supplies a lot of belly laughs and dirty one-liners, but overall the dialogue felt as though it could have easily been cut down. Some recurring jokes, such as Chrissy’s plastic surgery, become less and less amusing as the play goes on, while a few ‘topical’ comments, regarding Sarah Harding and another, about gender identities, feel mean spirited and not really very funny.

Despite this, Melanie Blake intertwined The Thunder Girls’ narrative with themes that were close to home; and in it’s softer moments, these really do come through. Being a northern, middle-aged, working class woman herself, it’s likely Blake wrote parts of herself into her flawed, yet likeable characters.

While most women in their 40s/50s never played in a successful girlband, the four women’s worries – money troubles, loneliness, unsatisfying marriages – are ones that are largely relatable to. And in facing those worries, and overcoming their flaws, the characters are able to swallow their pride (Chrissy and Roxanne) stand up for themselves (Carly) and be themselves (Anita) we see the four finally embrace true happiness.

The production side of The Thunder Girls is largely successful: Chrissy’s home – decorated with champagne bottles aplenty and Pop-Art portraits of her face splashed all over the walls – gives us a great idea of her character before the bodycon-clad blonde entered the stage. In particular the red dress – matching the exact shade of her tacky love seat – is a nice touch.

Structure-wise, the idea of the four Thunder Girls performing solo songs throughout, before reforming at the end works well, even if the lyrics don’t add much to the plot.

The most sincere, if disheartening, part comes right towards the end, when Roxanne and Chrissy’s ex Rick breaks the news that the band’s reunion deal is off the table. They were supposed to be supporting a selection of huge ’80s bands on a stadium tour, but the promoters decided to ditch the girls so the remaining acts on the bill – all consisting of male members – could get a bigger cut each. It may be 2019, but as Melanie Blake and The Thunder Girls show us, it’s a man’s world – and there’s little the much-ignored demographic of middle aged, working class women can do about that.

The Thunder Girls is playing at the Lowry Theatre from 24th-28th September 2019. It is sold out.