Ahead of the upcoming UK tour of her witty debut hour Composed, performance artist and producer Rosa Postlethewaite talks about bringing her own experiences of working in the arts to the centre stage. 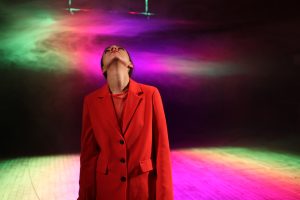 Tell us a bit about Composed, what’s it about and what can audiences expect?

Composed is kind of a variety show but with only one person on stage. I perform a series of acts based on things a host might do. Like thanking the sponsors or warming up the crowd. I play with these rituals to reflect on the relationship between a spokesperson and an institution. The performance is captioned and relaxed. A voice-over audio describes the performance and also imagines what it might have been. Composed based on my experience as an arts organisation employee in various places. And interrogates the small actions that exclude people. It’s confrontational (both inwards and outward) and hopefully, surprising.

Why do you think now is such an important time to be bringing these conversations to the stage?

I don’t think these conversation are new. But I think it’s always important to give time to thinking about how people, including artists, participate in systems of oppression. On a personal level these kind of conversations are important to me. In Edinburgh I saw, In Bed With My Brother’s Tricky Second Album which made me feel less alone in the anger and fear I was feeling. Last Yearz Interesting Negro’s work makes me think about my gaze and the relationship between the artist and audience member. Right now, working conditions for arts workers are scary. This is the first tour I’ve done of my work and the amount of risk that falls on the artist has totally shocked me. At the moment, I wouldn’t want to do it again.

Composed is partly based on your own experiences of working in the arts. What did you learn from your first job in the arts?

I think my first job in the arts was as an usher at Wilton’s Music Hall. I learnt about how it feels to watch the same show over and over, which was actually really good. I also saw Dickie Beau for the first time, which was amazing.

As the show tours, each performance will respond to the venue. How do you think the performances will be likely to differ?

I re-write a small part of the script for each performance. Which (without going into too much detail) is based on the history of the theatre. There’s also a section which is improvised so that really changes based on my mood and who’s in the space. The other thing is the size of the venue. My presence changes a lot in bigger spaces. My persona feels much more grandiose in a big space!

What’s next for you after the tour of Composed?

I’m going to lie down for two weeks. And then I’m working as a dramaturg on two new shows, This is a show about Lying by dance artist Lizzie J Klotz and The Gamble Project (working title) by performance artist Hannah Walker. I produce and co-host a quarterly performance club night called PUG and #10 will be on 6th December! I’ve been wanting to make a performance about something I really love for a while. So I’m thinking about reality TV.