Poet and performer Neal Pike’s latest show Five Years draws on his own experiences of life at a special educational needs school in Nottinghamshire. Neal speaks to us about sharing his story on stage and his advice for performers with a stutter ahead of a UK tour this Autumn. 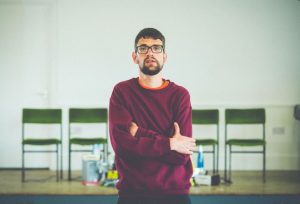 Tell us a bit about Five Years, what’s it about and what can audiences expect?

Five Years is a show about my time at a special educational needs school in Nottinghamshire in the nineties. I’m a massive Shane meadows fan so I tried to find the balance of humour, identity and darkness in my story so I could tell it. It’s about friendship both good and bad and trying to find identity when you’re being forced to become a type of person who only knows how to survive. It’s looking back on how all this turned you into the person you are today.

It’s also about the occasional escape and working out how you developed your coping mechanisms for life while at school.

Expect stuttering, occasional laughs and and a table moving around.

Five Years is based on your own personal experiences of growing up with a stutter. What advice would you give for performers with a stutter?

My stutter is only part of me and only really comes up a few times in the show. I often forget I have a stutter to be honest then get annoyed when I start stuttering.

Breathe. Don’t forget to breath before every show and poetry set. Before I start speaking I just stand on stage for what feels like forever but is probably less than 10 seconds

Do this it really helps. I’ve been called ballsy for doing this and not launching straight into the piece. If I launched straight in there’s a very high chance I would be a stuttering mess.

So yes, take 10 seconds to close your eyes and breath. Then launch in.

You’ve collaborated with poet and director Matt Miller. How did you first start working together?

I’ve known Matt since 2012 when we were both in the now defunct poetry collective mouthy poets. I first met Matt when they were performing a poem in a tent in market square in Nottingham.

In 2015 we both went to Arvon together to a writing retreat at Totley Barton in Devon on Wednesday (I was drinking wine or rum I can’t remember now). Jess Thom aka Tourette’s Hero
was doing a masterclass and I can’t remember what she was saying now but I remember being so inspired I was like yes I’m going to write MY STORY about my time at special educational needs school and told matt about it. I spent most of 2016 writing the first draft and in March 2017 we spent a week in Newcastle working on it.

What do you hope that audiences will take away from seeing the show?

The preview shows have been really inspiring so more of that would be lovely. Lots of people coming up to me after the show going this was really inspiring, you are telling my story thank you for this
and more stories like this please. And it’d be nice to see a stuffed Kermit cuddly tour in the audience again. Also opening up audiences to what life was like in a SEN school in the nineties!

What’s next for you after the tour of Five Years?

Collapsing in a heap and not doing anything for a few months… nah January my second collection of poetry how do you sell sleep? will be published in January by big white shed.

Me and Matt started working on a show called I bet you got stuck on the dancefloor about music, masculinity, hero, worship and death so we are planning to turn that from a 30 minute show into a 70 minute show with some amazing musicians.