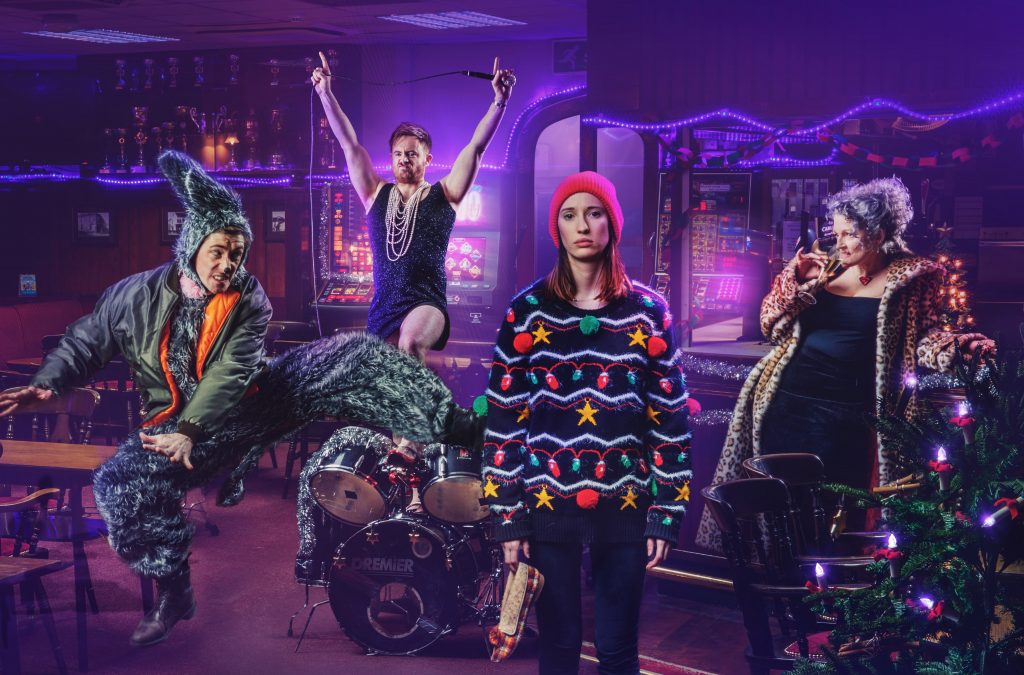 Taking the term ‘pub theatre’ literally, Cinderella is a site-specific theatre show that takes all the best of traditional British panto and tops it off with a pint. Written by Luke Barnes (All We Ever Wanted Was Everything), this knees up of a night out brings all the characters you know, love and hate, to pull your mates, spill your pints and pour their hearts out on the karaoke. Crammed with live music, bingo, and a touch of midnight magic, Cinderella will have audiences dancing in the aisles and laughing their bloody baubles off. Think The Royle Family crossed with Elf… all set in a local boozer where the audience buy their drinks from the on-stage bar.

Artistic director and founder of Not Too Tame, Jimmy Fairhurst told us “I’m thrilled to be coming to the Vaults with our first ever Christmas show, created with award-winning writer Luke Barnes. Cinderella is a great night out, that is accessible to anyone and everyone that enjoys a few drinks, a sing song and time with their friends and loved ones after a hard day’s graft. This show is a culmination of several years of honing our craft, the 360-degree live experience is a testament to our ability to throw a kicking party.”

Writer Luke Barnes’ first play Chapel Street was a hit at the Edinburgh Festival Fringe before transferring and embarking on a UK tour. He followed it with Bottleneck, produced by HighTide and transferred to the Soho Theatre. After becoming writer on attachment to the Liverpool Everyman and Playhouse and Soho Theatre his work began to move towards a culture of attracting new, untraditional, audiences and in 2014 he made The Saints with Matthew Dunster at the Nuffield, Southampton.  Luke went on to work with Hull based Middle Child where he made Weekend Rockstars, Ten Storey Love Song and All We Ever Wanted Was Everything, and remains an associate. Luke then made No One Will Tell Me How To Start A Revolution at Hampstead Theatre. During this time Luke began work with the Young Vic’s Taking Part department where he started to think about the power of theatre for social good. He made Men In Blue at Latitude with a group of men who had depression, bipolar, or schizophrenia, FABLE, with refugees, and latterly The Jumper Factory in HMP Wandsworth which went on to have a full production at the Young Vic before going on tour. Luke’s work has since taken a step into giving platform for other people’s voices and has made several plays for young people including Loki & Cassie at the Almeida, The Sad Club for the National Theatre, Lost Boys New Town and The Class for the National Youth Theatre.

Not Too Tame came out of a desire to create well crafted, entertaining and socially important work that appeals to a working-class community. Money, subject matter and a misrepresentation of the working class are all factors that have helped distance people from the arts; challenging this is a key driving force in their work today. Of all previous Not Too Tame theatre shows 26% of attendees were first-time theatre goers. Previous productions include Oi For England (Cardiff and Edinburgh Fringe Festival), Early Doors (sell out show Edinburgh Fringe 2014 and 2016), Electric Eden (opened the Shanghai International Festival 2017). Not Too Tame ‘s patrons are Christopher Ecclestone and Stephen Tompkinson. They are members of the Push Things Forward Collective with Middle Child and Nabokov.

James Seabright is an Olivier Award winning theatre producer (for Showstopper! The Improvised Musical) whose current shows include Adam Kay’s This Is Going To Hurt (UK tour), An Act Of God by David Javerbaum starring Zoe Lyons (The Vaults), Potted Potter (Las Vegas), The Crown Dual (Wilton’s Music Hall) and Trainspotting Live (UK tour). He is also chair of the trustees of the King’s Head Theatre and a founding member of the League of Independent Producers.