A bold and absorbing production.

Buchner’s Woyzeck examines those who are subject to figures of authority. He exposes the landed folk, the general, the medic and all those who feel they should pontificate to the less educated. Missing Cat’s production at Edinburgh Fringe Festival brings out much of this oppressive behaviour in an impressively creative production.

Against the background of war and conflict is poor pressed-upon Woyzcek – the salt of the earth, an earth that will ultimately consume him and us. In a land of torment our feckless soldier and barber who grabs what love or lust might come his way frets and concerns himself with the world of gossip and advice, as if somehow sensing he would fulfil their expectations and kill the thing he loves. 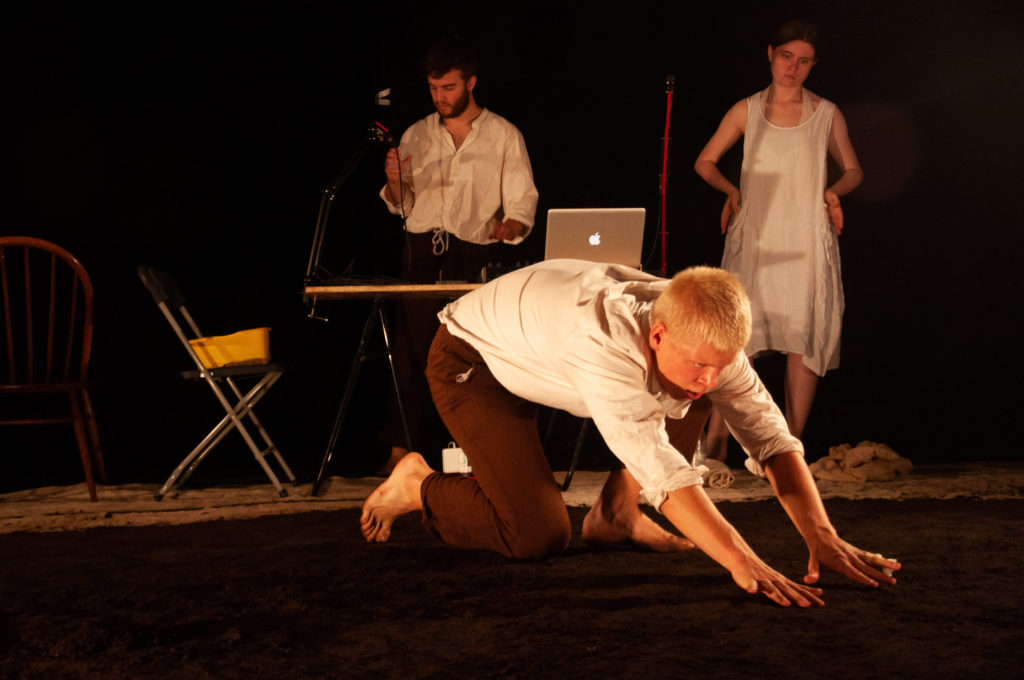 The whirligig of social and sexual pressures is ably conveyed in the play. Saul Barrett, vocally harsh at times but with a committed performance he sounds like the exploited proletariat who is equally distressed and in a dilemma about duty and responsibility. He is ultimately overcome by jealousy and violence ensues. It is an interesting portrayal of declining mental health and for a nineteenth century play it resonates well for our times.

The company created their own sound effects in view of the audience and screeches, thumps, bumps and steps helped create changing locations and atmospheres. The acting space was open and on a floor was a circle of earth. A strong visual reminder to us to us of those who struggle to rise from it.

The action upon the circle of earth was engrossing. A range of barefooted characters enter the space to argue, fornicate, nurse and work in a space that will call them back from whence they came. It is a powerful image as their costumes become dirty and in particular their feet muddied and black – earth to earth. Chris Bom impressively played a range of parts that convinced as he conveyed the oppressive figures of the establishment who in the end care not a jot for our foot soldier but are rather more interested in their own opinions. It’s a curious bleak tale but told here with some relish and effective style that holds our attention.

In Woyzeck , Buchner illuminates the contradictions in life. It serves to remind us of the gruelling nature of poverty and the desperate inequalities that this brings about resulting in the crushing decline of mental well-being.