A really welcoming, fun and exciting way into theatre for small children as well as a great introduction to the library.

We’re Fringe veterans. This year marked our return after couple of years’ hiatus. And our perspective has changed. Enter The Two Year Old.

So, first things first. Slime is playing at Edinburgh’s Central Library. Arrive early and while away a little time in the Children’s Library – a fabulous, light, bright, fun (and blessedly calm) space, a great stock of books, comfy seats, and an excellent baby changing/toddler toileting room. Important stuff for the target audience.

Indeed there were plenty of little touches which showed a real understanding of the target audience. For example, we had exchanged our paper tickets for small foam blobs of ‘slime’ tickets which the (just) Two Year Old and her (nearly) Three Year Old cousin kept hold of very proudly until encouraged to drop them into the bucket by the entrance to the space. And there was an information board about the play so we could talk to them about the story before we went in. 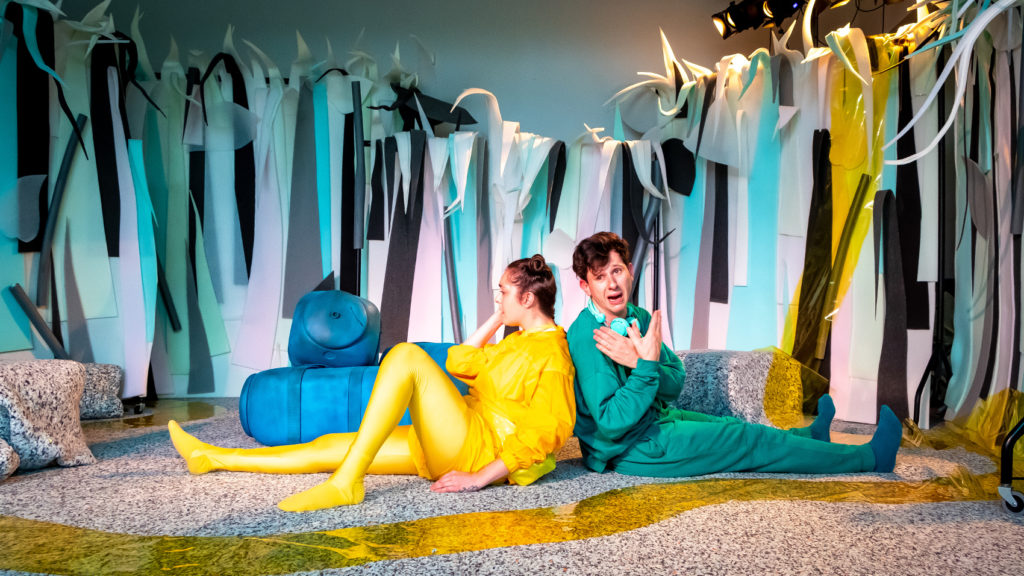 When we got up there, the toddlers were curious about the space. Shoes off, and into a cosy corner, with a bit of time to look about and absorb their surroundings. Foam lines the floor and the walls, and covers what little extra seating there is.

The story is a very simple, gentle, one, with just two characters: Slug and Caterpillar. They try independently, and then together, to reach a leaf to eat – vital to the caterpillar as part of its lifecycle, “just” food to the Slug.

This is great physical theatre and mime. Very few words are spoken, and all are accompanied by other aural cues or gestures to help the younger audience members understand. The only off note was the repeated use of the word “human”; not a word many in this age group will know (‘person’ or ‘child’ might have been a better bet). As a bonus there were plenty of amusing moments to keep the gown ups entertained too.

The actors welcomed the occasional intervention by excited and absorbed audience members, and were very good at responding to children who were less confident, recognising they were no less engaged. For example, when handing out imaginary popcorn from a cone, left some on the floor or the knee of a carer for children who didn’t take some for themselves. These children almost invariably picked up the imaginary popcorn to nibble on.

The ‘front of house’ staff were also great at accommodating the inevitable comings and goings of such a young audience and happy to facilitate when the Nearly Three Year Old needing to retreat with a grown up and peek in from a safe distance!

The handing out of stickers at the end saw both children happily showing off their caterpillar signs to the actual caterpillar!

We would highly recommend this show as a really welcoming, fun and exciting way into theatre for small children as well as a great introduction to the library.