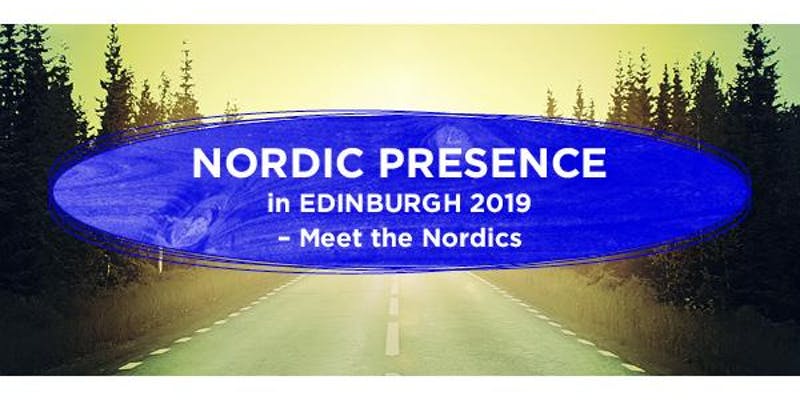 Nordic Evening Reception George Square ‘Meet the Nordics’ was the intention behind this promotional event, and we did.

With beer flowing and delicious canopies several of the performers spoke about their productions ranging from standup comedy to physical theatre to clowning and acrobatics.

It was a varied menu of talent and if anyone was unable to attend videos of their work were on a TV loop. The rain poured down that night but the extraordinary range of Nordic talent lifted the spirits. It was a friendly and well organised event and little bit glamorous as there was an appearance of The Greatest Divets, Drag artists in a swathe of wigs, eye lashes, glitter and vertiginous heels. These artists from Finland were joined by the Super Sunday company who have already been well received with their exciting and somewhat dangerous acrobatics and trampolining.

At the fringe this year there is a bigger turn out of Nordic talent than ever. There are shows from Finland, Norway, Iceland and Denmark.

Iceland was presenting a range of stand up comics and Breakfast Plays at the Travrerse Theatre. As if to top them Denmark and Sweden offered dramatic intense productions like Shine and I Run at Greenside in tandem with a selection of physical theatre performances, Raiders of the Grey Gold and Super Human which explores the limits of the human body. I found Paolo Nani clips of The Letter, now playing at the Pleasance after a successful European tour, both moving and funny and quite captivating in making the hard seem simple and the complex amusing.

Due to the popularity of  Nordic Noir on our TV screens we are well aware of the dark and gloomy side of Nordic weather which can give us the impression that they may be morose or insular but judging from their range of work on offer nothing could be further from the truth. Their work is funny, eclcetic, original, light and at times frivolous but of course it wouldn’t be Nordic if it wasn’t a little introspective at times!

What came over strongly at the reception was the sense of artistic collaboration among the Nordic countries and the joyous support they offered each other. Traditions and individuality were not ignored but creativity and originality was clearly something to strive for.

This year there are even more Nordic shows to be found at Edinburgh Festival Fringe supported by the Nordic embassies and in collaboration with the Royal Norwegian Consulate General in Edinburgh.

“We believe in supporting each other to grow together. That’s why the Nordics collaborate and rock the Edinburgh Festival Fringe boat together with these 3 Nordic events.“ Karen Toftegaard, producer from WILDTOPIA (Denmark), says.

I for one am really looking forward to wide ranging performances on offer from this talented group. Nordic countries will, I am sure, shine a light on this 2019 Fringe Festival in Edinburgh.