Produced by:
Piece of Yourself & The box Collective

An off Broadway hit comes to the fringe that reveals Shakespeare as a feminist! Well worth a visit.

At the Mint Studio in Greenside on Infirmary Street there is a rather special rendition of Shakespeare’s work. Last Life: A Shakespeare Play is an astonishing feat, not just in terms in of performances (certainly they are impressive ) but rather for the skill and craft of the writer, Sara Fay George. What a talent!

Sara Fay-George has edited a range of Shakespeare texts and not just his plays but his sonnets as well. Fay-George has brought together a selection of powerful exchanges between those male and female protagonists who love and loathe or challenge and resolve their differences.  She creates a narrative that explores the power struggle between these female and male characters and weaves a dynamic action that draws us in and exposes the brilliance of Shakespeare’s perceptions about love and desire between two lovers. 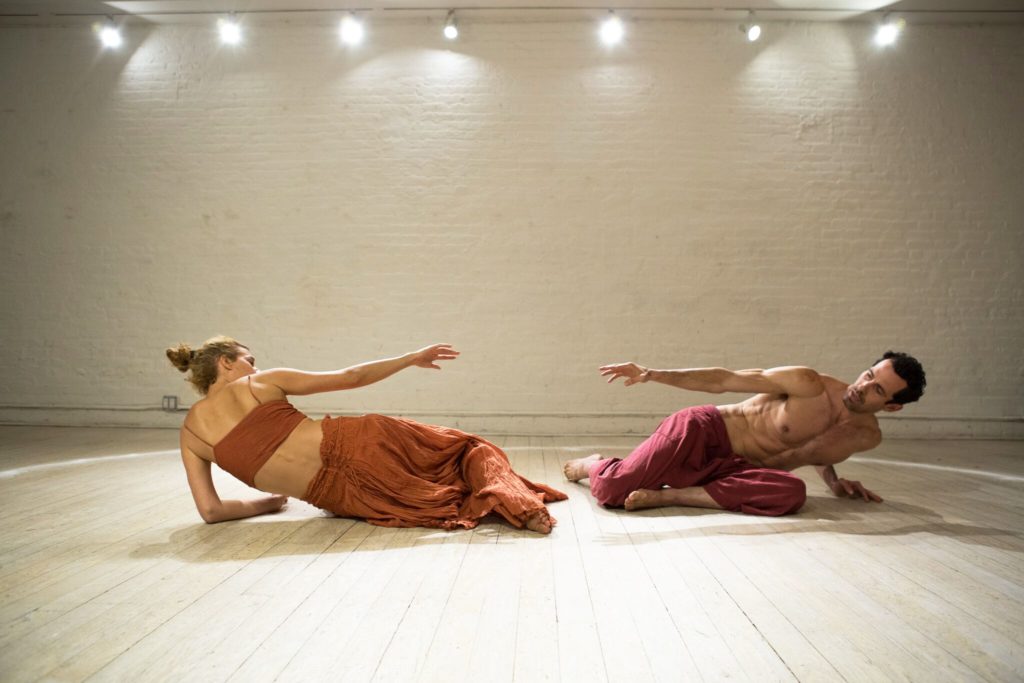 The play opens with the moving vocals from (Khadija Sallet) a watcher or siren who, with her salt cellar, marks out the circular performing space and then seems to almost conjure up our players. Then, like the gods of old, she promotes or provokes them before leaving them to their own vulnerable devices, only to watch them fall and rise and fall again – sport of the gods.

The performance ring suggests something of confinement, like a Sumo wrestling ring, but here the banter and exchanges force one or other of our protagonists to try to push themselves out of the ring at times yet in other moments they seem happy to be encircled. This is a story of love and division and each phase is marked by a bell being rung for yet another round of duologues that entice and repel one or other lover. No thought is content and many parts are played and certainly no tongue is held. In this confined circle all their worlds are staged and as neither will change for the other’s best virtue so they go on to challenge, probe, explore and match each other while they grapple with understanding what it is to love, to desire or to rule the other.

The performances by Esther Sophia Artner and Mikaal Bates are superbly well sustained both in terms of their physicality and their delivery. They manage the text with great vocal dexterity revealing the gender dynamics that the Bard explored throughout his work and in the tragic or humorous extracts we see a balanced perception and an understanding of womankind. Subsequently the piece would suggest he was an early feminist whose women question villiany, injustice and refuse pity, rather they will challenge and force submission while demanding recognition to be loved, or to be listened to, or to lead – so like a man –  ultimately we see that both parties are but errant knaves alike.

It is an impressive editing process to have worked through the Shakespeare cannon and then create a narrative that is dramatic and diverse in its emotional journey but ultimately, for me, it was more impressive than engaging, as the story of these two was rather overshadowed by the feat of the exercise in itself.