Review of: If You're Feeling Sinister

There’s something desolate and painful at the heart of this quirky, energetic show, and it took me a while to really pinpoint why I felt so oddly about it. On the surface, If You’re Feeling Sinister is a charming, wistful, play with songs, from the album of the same name; about a mismatched, platonic, couple who end up staging a hipster heist in reverse.

But dig a little deeper and we have a young woman idolizing an older man, whose judgement is, at the very least, questionable. She calls him Boss, and he calls her Kid (every responsible adult in the audience is creeped out the minute that comes up). They like to role play exciting situations. She’s suicidal, thinks of herself as a talentless c**t, and makes lists of all the things she wants to inherit from him when he’s dead. He blames her for making their fantasies real when she steals Dali’s queasy Christ of Saint John of the Cross from Kelvingrove Art Gallery. He makes her responsible for shielding him from his peer group thinking (knowing?) he’s pathetic. And he agrees with her that she ‘owns his ass’ despite him being relaxed about using her work without giving her proper credit. 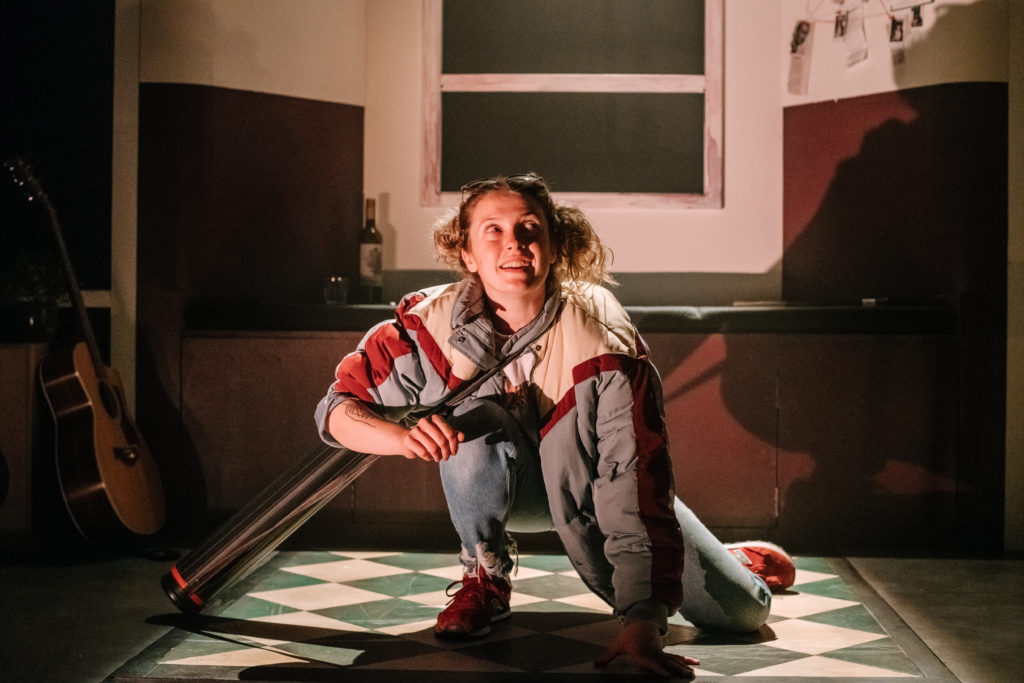 Kid, you want to cry, that man is not worth it. But what young woman ever did listen to the advice of her jaded elders? His greater experience and resources make him a comfort blanket and a brick wall. Her earnest youth and enthusiasm make her a flame to a moth and far more prudent to cast aside. The romantic agony of it all.

Which means it couldn’t do a better job of capturing the atmosphere of the songs. Fey pop-folk ditties full of images of starving foxes, intergenerational tensions, and hopeless hero worship. The direction from Paul Brotherson is epic and mythic. Their little flat is the secret hub of a Glasgow they will rob and explode. We’re forsaken in the Clyde. Listed with the dead in the Necropolis. Dropped from above like a ninja. All vividly played by Sarah Swire and Alan McHugh.

Of course Kid punishes herself too harshly, and lets Boss off the hook too lightly, but this beautiful script from Eve Nicol, articulates something so rarely said, that it should be cherished. Let our asthmatic, frustrated heroine, and our dodgy, lethargic hero be their Bonnie and Clyde, their Fred and Ginger, their Belle and Sebastian.

Producer: Avalon and BBC Arts in association with Tron Theatre

If You’re Feeling Sinister will be continuing its run at Gilded Balloon: Patter Hoose till 26th February at 15:45. You can book your tickets from www.edfringe.com