Doppelgangster’s COLD WAR unfolded in Divadlo Inspirace, “the theatre of inspiration!” as part of Prague Fringe Festival 2019. A rudimentary sweep of Doppelgangster’s social media pre-show portrayed two serious-looking individuals, in possession of a very serious #performance inclination about the ecological crisis. They describe themselves as ‘iconoclastic, politically charged, and so entertaining that upon seeing the company’s work Medusa turned to stone.’

It comes off as very promising. 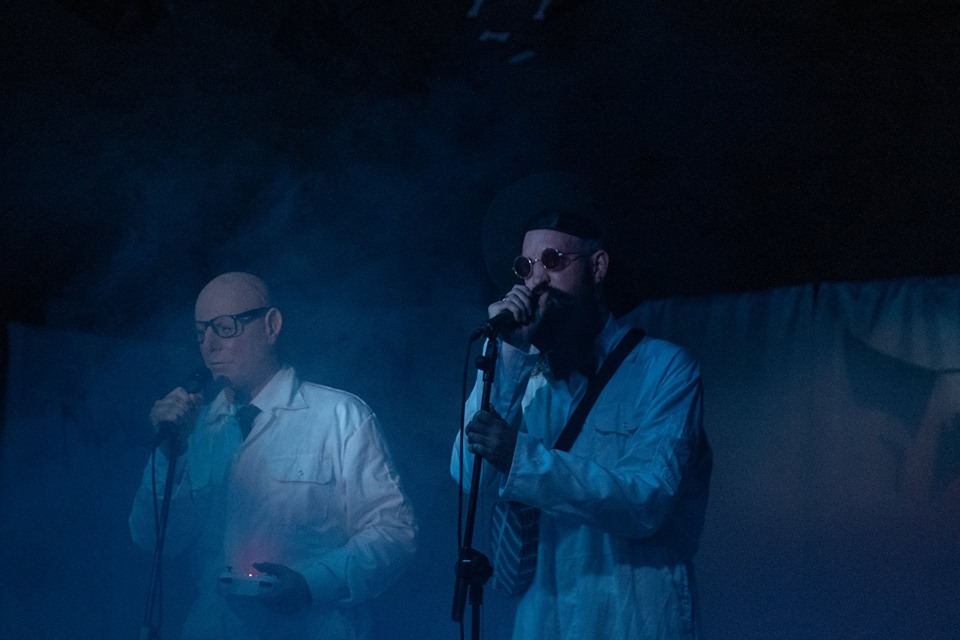 … COLD WAR goes beyond promising. It is radically exciting theatre. The kind where you grab your best friend’s arm in excitement at walls of booming sound in darkness. It is so engaging and well-paced, you can’t believe there’s a script. It is keenly aware that everything it is, panic, neurosis, confrontation, isolation, is about the fact that our planet is breaking and that we are breaking it. It is not afraid to tell stories about itself to carry that message. I believed all of it and also had a sense that maybe believing them didn’t matter because the glaciers are melting anyway. I trusted … COLD WAR with that sense.

It is stark, at times post-dramatic and demands your spectatorship at all times. It’s also, somehow, likeable, tongue-in-cheek and conversational. The design is simple, anarchistic and arresting. In terms of a move towards eco-consciousness in theatre, … COLD WAR felt willing to sacrifice a form and material with a carbon footprint akin to any other small touring production, in order to create an intervention that could stimulate change in the hearts and minds of the audience engaging with it.

They trust you to shout their screamo rap songs about the Titanic back at you while they’re changing their pants. You do. They get it. You can only be present with it.

You can keep up with Doppelgangster at www.doppelgangster.com. They’re making a piece of work about pollution called CHOKE ME in September and October with young people from Sheffield Hallam University.

Jennifer Aust is a theatre artist and stage manager from Dublin, Ireland. She makes work with OXBO Theatre, who you can follow online @oxbotheatre.