Long standing Shit-Faced Shakespeare collaborator David Ellis tells us about current show Hamlet and just what it is like being a part of the iconic company.

How many Shit-faced shows have you worked on now?

Oh, far too many! I first joined in 2014 and was part of our Edinburgh run of The Two Gentlemen of Verona … I can remember vividly trying to explain to my parents what the job was. I don’t think I’d ever said “Shit-faced” to my parents before… now it’s a really common word in their house. I’ve performed in A Midsummer Night’s Dream, Measure for Measure, Romeo & Juliet, Hamlet and a one off of Merchant of Venice when I had to cover for someone last minute. I’ve performed at the Brighton Fringe, Edinburgh Fringe, London’s West End and all over Australia.

And who are you playing in Hamlet?

On some nights I’ll be playing Hamlet and on other I’ll be playing Laertes/ Ghost. We also all take turns playing the compere, arguably the most important role as they have to steer the drunk actor in the right direction if they start go too far off piste.

What is it like regularly getting intentionally drunk for work?

This is the best job in the world and there’s a reason I’ve been doing it for so long. It’s sounds strange to say but it now feels very normal to get drunk for work. That’s not to say it’s boring but we’re all a bit older (not necessarily wiser) and we tend to save our mischievousness for the stage. I used to be quite naughty and run and hide and get up to all sorts of high-jinx. I once had to drink at my day job because it overlapped with when I needed to start drinking for the show. I won’t say where but I told my manager I had to drink for the show and for the last 30 minutes of my shift I was drinking rum and coke from a coke bottle while someone waited outside to chaperone me to the theatre. That manager was a legend.

You’ve also worked for NewsRevue, The Reduced Shakespeare Company and Potted Potter – what draws you to theatre that parodies or plays with existing stories and characters?

I’m drawn to great live comedy and these are some of the best live comedy shows out there that I’ve been lucky enough to work on. NewsRevue (the satirical news show) holds the world record for the longest running live comedy show, when I did it, the show was in it’s 30th year, it’s not slowed down since then. You get to write the show and it’s 60% new material each week so it’s hectic but super rewarding. I knew that if I wanted to work in comedy this as a show that was worth getting on my CV and the experience it gave me was fantastic. I never in a million years thought I’d get the chance to work with the Reduced Shakespeare Company. I saw the show The Complete Works of William Shakespeare (abridged) when I was a kid and loved it. It still holds the record for the longest running comedy in the West End (for some reason 39 steps closed about a week before they broke the record). Getting to work with those guys was honestly a dream come true. I was also lucky enough to work on the show Potted Potter (two guys doing all seven Harry Potter books in 70 minutes) over in Toronto. They’ve just opened in Vegas actually and it’s going down really well. I’m a big HP fan to getting to be part of that franchise in whatever form (although technically it’s an unauthorised parody) was just brilliant. Comedy is where it’s at. Life it too short to be serious.

Let’s Get Macho the online YouTube series is written and produced by you – how did that come about? What are the benefits and pitfalls of making work like this? 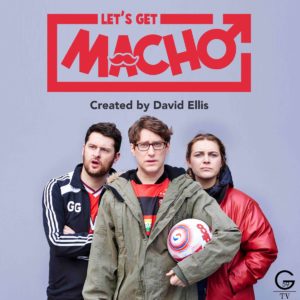 The benefits are that you’re completely in the driving seat of your own work. Obviously with that come too many pitfalls to mention. I won’t list them all otherwise it might discourage people and I don’t want to do that. Something I will say is always back up your stuff. If you’ve spent time and money filming something, for the love of God don’t save it all in one place because if you lose that hard drive or laptop it’s game over. Creating your own work is brilliant though. Stop waiting around for someone to give you the opportunity you want and do it yourself. Make your own work and make your own luck. Be active in creating a career for yourself. I’ve always wanted my own sitcom and for me, Let’s Get Macho is my first steps towards making that a reality. Watch this space … (or one better, go watch the series!)

What would you like to be working on in the future?

I’d definitely like to work more on television as well as other great comedy stage shows. I’d love a chance to work with Mischief Theatre and the guys over at Austentatious … they are incredible. And obviously I’d want to continue to get drunk for a living … because it’s THE BEST!

Sh!t-faced Shakespeare®: Hamlet is playing at The Leicester Square Theatre from now to 14 September 2019 at 7pm. You can buy tickets here.