A powerful, personal and poetic one-woman show about living with mental health issues.

We’re in a basement, with natural light and a CD player, and we’re in a circle chatting about the weather. Alaska at Summerhall starts so imperceptibly that I’m not sure it’s a play. I’m asked to visualise a party on a moonbase, and so I visualise a party on a moonbase, and as the performer Cheryl Martin, soothingly layers on the details, I start to feel I’m on this moonbase.

She tells us about feeling numb, about her impulses to spend and be perfect, her Irish Catholic upbringing in Washington DC, being a clever child, going to Cambridge; she clicks her way through music on the CD player and then dances. It’s all so natural that I start to panic that I’ve walked into the wrong room and I’m part of a conversation that I’m not sage enough to handle, so I tune into the rhythm of the piece until I’m aware of its structure and I can relax. 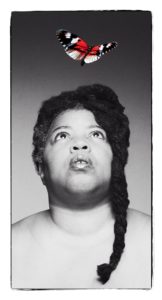 But it’s still a mesmerising and immersive experience. I can see the mental hospital wards, and I feel her anger that she didn’t believe a friend who had been telling the truth, I can see that friend’s funeral, see the doctors, both here and in the USA. I admire how resilient and determined she was to find medicine that actually worked, and I know I would never be so brave. She sings Out Here On My Own from the 1980s film Fame, and it’s so light and clear, so nostalgic and aspirational, that we cry.

At some point she lists the things that she will never do, and will never be, and it quietly stuns, because our culture refuses to acknowledge never. We let go of nightmares; dreams are supposed to stay, tantalising us with maybe.

This unmissable show ends on a maybe. A dream for other people, that they will have the space and safety to create, because Alaska teaches us that beauty is born in ugly ways, but that we can find what we need to flourish.

Alaska will be continuing its run at Summerhall till 25th August at 14:00 every day except the 19th. You can book your tickets from www.edfringe.com